Although considered a box office disappointment in 1987 (mostly due to poor marketing by the studio), Innerspace eventually found its audience on home video, and is likely director Joe Dante's most accessible film for mainstream audiences, thanks to performances by Dennis Quaid, Meg Ryan, and Martin Short, as well as the excellent visual effects work by Industrial Light and Magic, led by Dennis Muren, that earned the film an Academy Award. 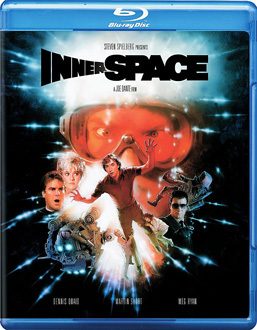 "We're gonna drink this one to Ozzie. A good man who tried to save my ass by injecting me into yours." - Tuck Pendleton (Dennis Quaid)

Jack Putter (Martin Short) is a hypochondriac, suffering from nightmare images of a potential cashier incident gone tragically wrong. When his doctor (William Schallert) prescribes a vacation with no excitement, Jack heads to the mall and books a cruise. As he gets ready to leave, a scientist in a white lab coat, Dr. Ozzie Wexler (John Hora) approaches him and injects a hypodermic needle filled with a solution into his buttocks, and suddenly dies. Jack thinks nothing of it, and heads to his job as an assistant manager at Safeway. What Jack soon finds out (through a series of humorous events) that inside that syringe was a miniaturized submersible pod with washed-up test pilot Tuck Pendleton (Dennis Quaid) at the helm in an attempt to keep the scientist's experiment from falling into the wrong hands. When Jack is chased down by henchman employed by Victor Scrimshaw (Kevin McCarthy), Tuck suggests that they find investigative reporter (and former flame) Lydia Maxwell (Meg Ryan in her first starring role). Lydia is aware that something is up, since there has been chatter that The Cowboy (Robert Picardo) is on his way to San Francisco to retrieve stolen technology (after all, it was The Cowboy that smuggled and introduced velcro to the Persian Gulf). But there is a complication - Scrimshaw's top scientist, Dr. Canker (Fiona Lewis) managed to steal one of the two chips necessary for the re-enlargement process from Dr. Wexler, and Tuck only has enough oxygen to last another 24 hours before Jack has a miniaturized submersible pod floating around his insides with a teeny tiny human skeleton at the helm. Tuck and Jack must work together, with help from Lydia, to retrieve that second chip and get back to the lab before time runs out.

I first fell in love with Innerspace when I viewed the film the day it opened in 70mm at the Cinedome in Orange, California as part of an assignment for Lucasfilm's Theatre Alignment Program (theater evaluators were sent to check on 70mm engagements for theater and presentation quality during the first ten days of release). While I won't call the film perfect, everything in the film seems to be running on all eight cylinders, from the performances and casting, to direction (Joe Dante), writing (Chip Prosser and Jeffrey Boam), scoring (the late, great Jerry Goldsmith), visual effects (ILM, led by Dennis Muren), cinematography (by Andrew Laszlo), etc. I'd been a fan of director Joe Dante's work up to this point, particularly Gremlins and his segment from Twilight Zone: The Movie. But those had all been horror with comedic elements to them, and Innerspace was something entirely different - part science fiction, romantic comedy, buddy picture, and action film all rolled up into one movie. With Innerspace, Dante was able to shift genres with relative ease, and what really makes the film tick is the chemistry between its three leads (Short, Quaid, and Ryan), the brilliant second unit stunt work by Glenn Randall (featuring not one, but two thrilling chase sequences), and the pre-CGI visual effects that still hold up today, all making the film fairly timeless. And don't forget the supporting cast, which includes Kevin McCarthy as the off his rocker Scrimshaw, Fiona Lewis as the sexually devious Dr. Canker, John Hora (Dante's main cinematographer and not an actor) as the absent-minded Dr. Ozzie Wexler who apparently had some sort of relationship with Dr. Canker, Vernon Wells as the menacing but silent Mr. Igoe, and Robert Picardo who just about steals every scene he appears in as the womanizing but not too bright Cowboy. Innerspace, like many of Joe Dante's films, is chock full of inside jokes and hidden visual gags, including a large seed pod in Scrimshaw's dining room (McCarthy starred in Invasion of the Body Snatchers), an overheated AMC Gremlin parked on the shoulder of a congested freeway, the casting of William Schallert as Jack Putter's doctor (he also played the doctor to The Incredible Shrinking Man), plus cameos by Dick Miller, Chuck Jones, Rance Howard, Kathleen Freeman, and Archie Hahn.

This is the first time Innerspace has appeared on Blu-ray, and Warner has created a new master for this release, which was approved by Joe Dante. Although the packaging indicates a 1.85:1 aspect ratio, the movie appears in an opened-up 1.78:1 ratio, and was compressed using the AVC codec. Compared to both the 10+ year old DVD release and previous Digital HD releases, this is a major improvement. Colors are more vibrant and lifelike, detail is more refined, contrast is excellent with deep blacks and bright whites, all while retaining natural film grain. My only complaint is the swapping of the Warner logo at the beginning of the film, resulting in a few seconds of dead air until the Warner fanfare begins almost halfway through the current opening logo.

The DTS-HD Master Audio 5.1 track sounds as if it is the same mix as the previous lossy Dolby Digital 5.1 track of the old DVD, but with increased dynamic range and fidelity. Dialogue is clear and concise, directed mostly to the center channel with some panning as characters walk off screen. Jerry Goldsmith's score sounds better than ever, spread across all 5 channels, but is never intrusive. LFE is used effectively, particularly for a late 1980s film (it was the first film released in Dolby Stereo SR, which had a wider dynamic range than traditional Dolby Stereo). There have been some reports of clicking when playing back on certain Sony Blu-ray players, including PlayStation 3, PlayStation 4, and BDP-S590. I did not encounter any clicking when played back on both my PS3 Slim and Sony BDP-S5100 through my Marantz SR5008 receiver. All three are running the most current firmware.

Audio Commentary: Director Joe Dante and Producer Michael Finnell are joined by actors Kevin McCarthy and Robert Picardo, and Visual Effects Supervisor Dennis Muren in this commentary track ported over from the previous DVD release. I've always enjoyed Dante's commentaries for his films, as they are always informative with a sense of fun. Dante and Finnell dominate the track, remembering just about every little detail about the making of the film, while Muren breaks in to quickly discuss many of the visual effects shots (some are so brief that at times all Muren has time to say are "There's some more fat cells."). McCarthy pipes in every so often about his character, and Picardo doesn't join the party until his character arrives on screen (although Picardo has some great one-liners, such as "I pushed buttons on consoles like that for seven years.").

After all these years, Innerspace still sits at number three on my all-time favorites list (which is why is receives a rarely issued 5 out of 5). The new transfer alone is worth the upgrade, especially at the under $10 street price. Well recommended!!

Great review, Todd! I haven't seen InnerSpace in (mumble-mumble) years. Maybe not since it hit the mom and pop VHS rental shops, when I was in high school.


It's not a purchase for me, but this would be a fun rental to watch anew.

I watched this last night and enjoyed it a lot; I hadn't seen it in years, although I recall loving it when it came out. I never knew it was a box-office disappointment. The blu looks very film-like to me.


I agree about the Warner logo. I don't mind if they add a modern logo at the beginning, as long as it is followed by the original.


You mentioned seeing this in 70mm when it was released; does that mean they would have cropped it to 2:2?

I saw the film in its original theatrical release. Don't really remember a lot about it, since I only saw it once. I do vaguely remember that it wasn't a bad comedy. Have to see if I can pick it up cheap sometime and give the film another go. The cover for the Blu is awful though. It looks like it was made in Photoshop on a budget of 10 cents.

KPmusmag said:
You mentioned seeing this in 70mm when it was released; does that mean they would have cropped it to 2:2?
Click to expand...

70mm blowups from this era generally retained their original aspect ratio. So Innerspace would have been 1.85:1 in 70mm.

"Dr. Ozzie Wexler (John Hora) approaches him and injects a hypodermic needle filled with a solution into his buttocks, and suddenly dies. Jack thinks nothing of it, and heads to his job as an assistant manager at Safeway."


This is one of those times when you have to wonder if there could have been a better way to make that happen.

Why would someone essentially dismiss being injected with a needle?

Anyway I remember liking the movie back then and have the dvd too.
I seem to be remembering something wrong with the audio on the dvd,

I'm guessing this is fixed on this release I havent had a chance to check.

Thanks for putting this on my radar. Really had fond memories when I saw this in my youth, hoping it survives and holds up well. Used the Amazon/HTF link for the forum credit, should be here tonight thanks to Prime!
You must log in or register to reply here.