Fighting men during wartime and their families back home: it’s a scenario that has worked on stage and screen for centuries. Philip Dunne’s In Love and War does a decent job of establishing the family dynamics but falters afterwards when he begins to cut back and forth between the battlefield and the home front during his film’s last forty-five minutes making for a choppy and somewhat unsatisfying narrative. 20th Century Fox called on its extensive roster of young contract players to fill the principal roles here, and most of them do what the film calls for, but only a few really register due to the overcrowded cast and the lack of time to give them opportunities to truly establish character. 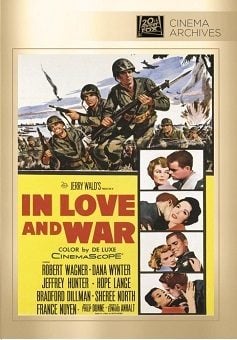 On a forty-eight hour pass before heading back out to the Pacific front in 1944, three Marines use their leave to see loved ones or establish new relationships. Aristocratic Alan Newcombe (Bradford Dillman) checks on his dipsomaniac fiancé Sue Trumbell (Dana Wynter) to pretty much call things off. He later meets pretty young Hawaiian nurse Kalai Ducanne (France Nuyen) and makes a strong connection right before leave is over. Kalai is with gal pal WAVE nurse Lorraine (Sheree North) who’s at a San Francisco hotel to meet old school friend Frankie O'Neill (Robert Wagner), but Frankie’s drunkenness ruins the evening for them both. Meanwhile, their sergeant Nico Kantaylis (Jeffrey Hunter) has just learned from girl friend Andrea Lenaine (Hope Lange) that she’s three months pregnant, so they rush off to get married and have a quick honeymoon before he must ship back out. Once leave is over, the three men are back in the Pacific trying to take a heavily fortified island from the Japanese, and the three Marines must face true tests of courage as they attempt to stay alive to return to those whom they love.

Edward Anhalt’s script was based on Anton Myrer’s novel The Big War, but it unquestionably focuses on the love part of the film’s title instead of the war angle. The film’s first hour takes place stateside as we explore the domestic lives of the film’s three protagonists, seeing uneasy family relationships that two of them are experiencing before heading off to be with their girls. With so many characters, none of the seven leading young actors really gets a chance to delve deeply into their parts and must paint their roles with two-dimensional stereotypical facets. Jeffrey Hunter’s Nico is a patriot putting service before everything else. Robert Wagner’s goofball Frankie is unsure if he has inner courage to stand up to the hell to come. Bradford Dillman’s Alan is determined to show that blue bloods can fight for their country as well as blue collars. And the ladies played by Hope Lange and France Nuyen are all loving and earnest in their devotion (Nuyen’s Kalai declares her love within hours of meeting Alan) though Dana Wynter’s alcoholic sleep-around gets some melodramatic time to herself. The war scenes are so chopped up as to be pretty ineffectual with real combat footage mixed in with studio shot scenes directed with little tension by Philip Dunne which are then intercut with occasional domestic scenes as the girls back home cope with life as it happens during wartime. The early family moments followed by scenes between the couples do give us a rooting interest for the men to survive the rigors of battle (not all of them do), so it’s the film’s opening hour that really works and makes the coda have the impact that it does.

Robert Wagner has the showiest of the roles of the men, getting to play drunk, kidding around with his younger brother and sister, and doing a frenzied if somewhat stumbling jitterbug with Sheree North (who’s otherwise not well used in the movie and fades from the memory), and then later during battle facing his cowardice and slowly becoming a leader when the chips are down. Hope Lange at this stage of her career could play sincere and vulnerable as well as any young actress in Hollywood, and she’s one character we’d like to have seen more of. Jeffrey Hunter has poise and command as the leader of the men, but his character’s role has the least screen time of the three leads. Bradford Dillman is just fine as the rich young man with something to prove. Dana Wynter’s scenes are all over-the-top compared to the more subtle acting styles of her co-stars, but she’s certainly the center of attention every time she’s on screen. France Nuyen struggles to bring some emotion to her dialogue as she plays most of it in a bland monotone. Mort Sahl makes his screen debut as Marine grunt Danny Krieger, and he’s filled with witty punchlines and proves to be quite appealing. Paul Comi as the field chaplain is also quite moving.

Here’s another ancient pan and scan 1.33:1 video transfer of a 2.35:1 Cinemascope original that Fox Cinema Archives is foisting off on unsuspecting patrons in the 21st century. They haven’t even bothered to letterbox the opening and closing credit sequences presenting instead the squeezed picture with our main characters ready to be sideshow freaks as the world’s skinniest people. With image quality compromised by the panning and scanning resulting in people chopped in half to fit them inside the 4:3 frame, one gets no sense of the size and scale of this movie or how effective Philip Dunne’s direction might have been. While the scenes in San Francisco are sharper than one might expect with the zoomed in picture, color is washed out or at best pale and favoring mostly an unappealing tan tone throughout. The vintage war footage is very soft and grainy and contains a fair amount of damage, though the video image of the other material is also compromised by flecks of dust and dirt and the reel change markers. The movie has been divided into chapters every ten minutes so there are 11 chapters here.

The Dolby Digital 2.0 stereo sound mix offers decent fidelity from what was likely a 4.0 original sound design. There is directionalized dialogue, and most of it is clear and clean except when Hugo Friedhofer’s score occasionally overpowers it. Age-related problems with hiss and crackle have been attended to, and for a change, the volume level of the disc is appropriate and doesn’t need adjusting.

The domestic stories are so much more interesting than the war stories with In Love and War, but with Fox Cinema Archives’ lackluster porting of a vintage television video transfer ill-suited for 21st century widescreen televisions, one can’t really appreciate either side of the question. Here’s yet another 1950s Cinemascope offering desperately in need of some tender, loving care, a list of titles that has grown increasingly and depressingly long.

Fox had such a good classic DVD program for a while in the early 2000s, and really presented their prize CinemaScope movies respectfully. Sigh!

Is HTF obligated to review these releases? I think if I were offered a screener of this for review, I'd say no thank you. Get back to me when you release it on BD in the proper aspect ratio.

No offense, Matt, but had this been my review, I'd have given it, and any other disc being released panned-and-scanned in this day and age gets an automatic 0/5. Shame on Fox.

Things were rarely this bad in the "early days" of DVD... Further proof that the Fox Archives is in the hands of lunatics.

I knew this one would be a dud before reading the review. I saw it on Fox Movie Channel recently and just know it would be another Pand and Scan disaster. Too bad, because I quite like the film.

At least the Spanish DVD is wide screen although not anamorphic.

Great review Matt. I have the Spanish release so enjoy this in its intended CinemaScope dimensions. I'd say the days of Fox's 'restoration comparisons' are long gone!

"In Love and War" is a fairly decent film, IMO. The MOD is likely ripped from the TV version Fox sold to cable channels back in the early 1980s. I don't recall if I copied this off Showtime or AMC, but the sound was off there, too...when they pan/scanned it for the TV market, someone messed up the audio connections. There is more music at key points in the movie than there is dialogue. The good news is that Hugo Friedhofer's score is a masterpiece...haunting, beautiful and well worth enjoying at the expense of the dialogue.


This is another example of the glory of early CinemaScope inasmuch as exteriors for the film were shot in San Francisco and other Northern California locales. There is also a very interesting segment in a war scene where one soldier points out to another that a mini-war is going on right next to them...and then we see a battle of ants in closeup.


It is my fervent hope that Twilight Time picks up more of the Fox 'Scope films in decent-to-excellent prints.

This film has had a strange history of transfers. It sounds like this is the transfer first shown on Cinemax, It has odd sound issues, As the film goes on the music gets louder and louder, almost to point of covering the dialogue.

much later, fox did a widescreen transfer for Fox Movies, but by that time, they had misplaced the stereo tracks. I think all of the import dvds are widescreen and mono.

someone needs to lift the stero track off of the pan scan and loop it onto the widescreen. Please !!!!!

Dick said:
No offense, Matt, but had this been my review, I'd have given it, and any other disc being released panned-and-scanned in this day and age gets an automatic 0/5. Shame on Fox.
Click to expand...

Mark-P said:
Is HTF obligated to review these releases? I think if I were offered a screener of this for review, I'd say no thank you. Get back to me when you release it on BD in the proper aspect ratio.
Click to expand...

HTF should review these discs and let us all know they're not worth buying.
You must log in or register to reply here.