With his innate acting talent and a couple of long term contracts, Henry Fonda assured himself of acting some great roles: sometimes famous (Abraham Lincoln), sometimes infamous (Frank James), sometimes a mix of both (Wyatt Earp), and sometimes an average man caught up in extraordinary circumstances such as he is in John M. Stahl’s Immortal Sergeant. Made right before Fonda enlisted in the U.S. Navy during World War II, Immortal Sergeant is an unusual war movie with the expected derring do, of course, but also offering a more thoughtful take on the internal and external components about what makes one a hero. 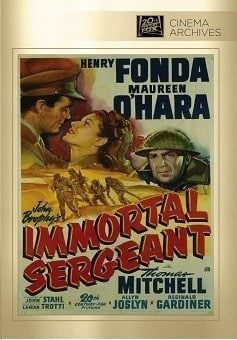 Corporal Colin Spence (Henry Spence), a quiet, unassuming Canadian soldier part of a British squadron in Northern Africa during World War II, finds himself under the leadership of an impressive man Sergeant Kelly (Thomas Mitchell) who lives, sleeps, and breathes the military. Colin has left behind a comely Irish lass named Valentine (Maureen O'Hara) who has been waffling in her affections between him and the assured Benedict (Reginald Gardiner), but he thinks of her often as his squad gets pinned down in the Libyan Desert first by Italian fighter planes and later by a squad of Germans who settle in and around an oasis in the desert, a position more important than ever to the British lads who are dying of thirst. Once the beloved sergeant is killed, it falls on Colin to take charge of the remaining men in his outfit to try to get them out of their predicament alive.Lamar Trotti based his screenplay on the novel by John Brophy, and while the lengthy flashbacks (five of them in total) show us the mild-mannered Colin being undermined at every turn by his more assertive rival Benedict, one of them would have been enough to get the point across that to get his girl and ultimately to save the lives of his men, a more forceful, risk-taking demeanor was going to be necessary. Thus, the theme of the film is rather flaccid, but that doesn’t demean the film’s three central action sequences, all of which are beautifully staged and shot (the last two in studio sets rather than in outdoor locations). The bombing by the Italians is quite a nail-biter as the men struggle for position to attempt to shoot down the planes, but the other two sequences with sneak attacks on Italian and German brigades (the latter during an impressive sandstorm preceded by Fonda’s Colin sneaking alone into the camp to get food and water) feature good, suspenseful action which helps endear other members of the squad to the viewer making us root for all of them inevitably, even the most cynical and quicksilver tempered of them (Morton Lowry’s Cottrell).As always playing the noble but shyly awkward everyman, Henry Fonda can’t be beaten at this game, a persona that would continue to serve him well through decades of other movies and stage plays. His triumphant reconnoiter into the German camp is one of the film’s real high water marks as the sergeant’s words ring in his ears before he makes decisions that could make or break his mission. Thomas Mitchell’s Sergeant Kelly is a staunch companion and a fine role model playing the title character. Allyn Joslyn, Melville Cooper, and Morton Lowry as the remaining men of the squad by the end all have effective moments in the limelight. Look fast to see Peter Lawford in one of his early roles as another British soldier who doesn’t escape from the Italian bombing. As for Maureen O'Hara, she’s rather wasted in the sweetheart role that doesn’t offer her much in the way of a complex character, and while the film makes much of Reginald Gardiner as Colin’s rival for her affections, one would hope that O’Hara’s Valentine would clearly understand the unctuousness of his personality and hope she’d be wise enough to circumvent it.

The film’s 1.37:1 theatrical aspect ratio is faithfully preserved in this MOD transfer. This isn’t the first time on DVD for Immortal Sergeant. It had a pressed solo DVD release as well as being part of a Henry Fonda film collection box set. Thus, prior work having been done on the film makes it among the strongest of the Fox MOD releases with excellent sharpness (upconversion truly brings it close to HD quality) and a beautiful grayscale rendering with outstanding black levels and offering terrific shadow detail. There are a few dust specks along the way but never in great numbers, and the film is free from other artifacts that would mar viewing pleasure. The film has been divided into chapters every ten minutes so this release has 10 chapters.

This disc is among the worst offenders of Fox’s unreasonable tendency to turn up the volume of their MOD releases to unconscionable levels of volume. It is critical to adjust loudness downward to prevent distortion and damage to one’s equipment. The Dolby Digital 2.0 sound mix is decoded by Dolby Prologic into the center channel. The dialogue is always completely understandable and is never compromised by the war-inspired sound effects (airplane flyovers, many gunshots, bombings, and explosions) or David Buttolph’s accompanying score. There are occasional bits of noise, crackle, and pops, but they are not the norm, and hiss is almost completely absent from the sound mix.

Because it had received a traditional DVD release earlier in the century, Immortal Sergeant is one of the best of the Fox Cinema Archive releases. Picture and sound quality (once volume levels are adjusted) will make for an outstanding viewing experience for lovers of classic films. If one doesn’t already have the movie, this is certainly a disc to seek out. Recommended!

I've only seen this film once and that was about thirty-five years ago. I remember quite enjoying the movie and thinking Maureen O'Hara had a fantastic face.

I'm delighted this disc is so much better than most others in Fox's MOD series. I'm placing my order immediately.

I must remember to turn the volume down!

As chance would have it, it showed the other night on TCM, and that's what reminded me that I had the MOD in the stack of discs sent for review, so I figured it was time I got to that particular one.

i remember this used to be a pressed disc.

kingfish said:
i remember this used to be a pressed disc.
Click to expand...

I said as much in my review. Check out the "Video Rating" section.
You must log in or register to reply here.