I have stopped writing 3D reviews mainly for the fact that there just isn't anything out there that impresses me anymore. Most of the stuff being released theatrically is upconversions. The classic fare has been distributed to so many other reviewers at once that I no longer get early peeks and us such, I don't feel my opinion holds any value.

This was not supposed to be a review. It was going to be a few comments posted in the Top 3D Titles thread. However, I thought I would try my hand at doing some writing this evening about a title I feel very strongly about. Now having a 3D Blu-ray library that comprises of a few hundred titles, I have become very trustworthy of certain brands and the quality presentation they promise.

IMAX has always been at the top of my list when it not only comes to quality 3D releases but providers of sound entertainment and often memorable learning experiences.

Someone on Facebook recommended Flight of the Butterflies as a worthy 3D release. Though I can't say at the time I was a big fan of butterflies, I was intrigued that this title was packaged as a 4k and 3D Blu-ray combo for a very luring pricepoint. I ended up buying it for just under $22, but looking at price history, this has dropped to under $12 from time to time on Amazon.

IMAX features tend to run under an hour in length. Many of them are shown to the public as part of a larger exhibit. As thus, the purpose is to keep the public entertained without taking up their entire day.

Flight of the Butterflies clocks in at 44 minutes, which is perfect for holding my attention on subject matter that I didn't think I would actually enjoy. After all, I'm purely vested in this for the 3D.

As is not so uncommon after watching these IMAX releases, I walked away with a new perspective on its subject matter. Through the use of excellent storytelling and immersion through amazing sight and sound provided by my home theater, I actually walked away with a greater appreciation of the Monarch Butterfly.

The 3D presentation is top-notch. The Imax cameras provide us with American and Mexican landscapes that are full of deep depth. There is plenty of WOW factor with images projecting themselves forward at the viewer. Imagine a swarm of butterflies coming off the screen and soaring before your eyes. The pop-out is not as "in your face" as I have seen on the best 3D titles out there, but the out of screen experience is impressive nonetheless. In addition to butterfly wings and antennas protruding outward, there are also flowers and other foliage that break the bounds of the display screen.

In addition to the remarkable visuals, I was further immersed in the story by the very busy and engaging Dolby Atmos soundtrack. There were some great overhead sounds of swarming butterflies and even a crop duster. In the quietest moments, it was truly amazing to hear the simple fluttering of wings coming from any of the 7 surrounding channels. I was just extremely happy that the Atmos track was included on the Blu-ray and it makes for a very captivating presentation.

Image quality is as spectacular as one would expect from an IMAX title, which is presented here with a wide open 1.78:1 aspect ratio. While very colorful at times, the filmmakers purposely dull the palette at certain intervals to give a better representation of the 1950s time period that is representative of the story. 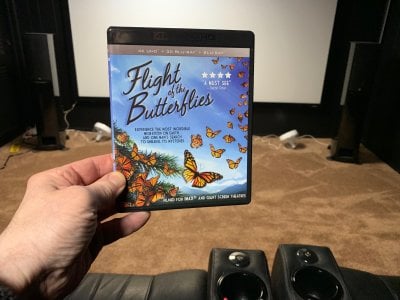 
In conclusion, you simply go wrong with an IMAX 3D release. Every single one that I own has been demo material for anyone I have invited into my home theater. What is particularly nice about Flight of The Butterflies is that you get an all-encompassing package for 4k, 3D and 2D Blu-ray with an Atmos presentation for all formats. What more could you ask for?

Thanks - I was also impressed with the 3D, with pop outs that weren't gimmicky but filled my room with colorful wings and flowers as you described. But I didn't have my Atmos setup at the time. I'm going to have to give this another viewing!

I wish more 3D releases included Atmos, it is a most logical pairing.

Thanks for the recommendation. I'll keep my eyes open for a good price.

Ironic that imax knows how to do 3D so well, yet has stopped supporting 3D movies on their screens.

Thank you so much for reminding me of this film - one of those that was sitting in shrink wrap. What an inspiring and beautiful film and the 3-D is marvelous.

Two years ago in Oct 2016, a flock of Monarch butterflies stopped around my office building for 3 days, presumably on their way to their Mexico retreat. The landscaping around my office building is overflowing with flowers, some of which make an orange carpet low to the ground. The butterflies would congregate on those and blend in, and when you walked by they would be startled and flutter up into a beautiful orange cloud. It was truly magical. I took video of it on my phone, but it just didn't capture the scope of it. It was very special to me to have a glimpse of their migration. None of my co-workers were interested, and I couldn't believe they weren't touched by this miracle of nature. The butterflies have not come this way again, but every Fall I hope to see them again. It was so interesting - they arrived together and left together; on the fourth day there was not one to be seen.

This is the only photo I took that was decent; it shows only one but there were several hundred at least. I had missed this thread.

How nice to see a new review from Ron. It's been too long!

I have this disc, and have watched it several times already.

I owned this disc for a couple years and finally decided to watch it. For enjoyment it is every bit as good as Ron says, perhaps better. It also tells a story. We all take for granted that the monarchs winter in Mexico, but that wasn’t always know and the film tells the viewer it was largely due to the efforts of two scientists (a married couple) that led to the discovery.

I was also fascinated to learn that it takes several generations of monarchs to complete the cycle. The last one is a “super” monarch to complete the last arduous journey to Mexico.
You must log in or register to reply here.