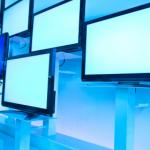 I would love it if record companies would take the entire remastered catalog of an artist and put on a single DVD. Make it playable on DVD players and rippable on computers. Anybody else think that this is an interesting idea?

Yeah, it would be a space saver, but consider some cons, either for the record company or consumer:

1. there would be a large psychological barrier for many consumers to overcome before paying, say $120 to $150 for a single disc (an average price for 10 CDs).

2. many people don't want the entire set, so you still have to produce and sell the individual albums.

3. Similar to #1, one disc just doesn't seem as "hefty" a package as a box set (this would be an advantage to some like yourself, but others might view it the other way.)

4. Unless you make a backup, you'd better be careful not to damage that one disc and thus lose the entire collection.

5. This may change someday, but for the foreseeable future there are a lot of CD players that won't play DVDs, in cars, etc. Further limits the appeal to some to buy it on DVD.

6. The record companies aren't happy that people can rip their CDs on computers now, so they're not likely to make a DVD compilation rippable (i.e., forgo the CSS protection feature of DVD) so that consumers could even more easily rip and share large amounts of material.