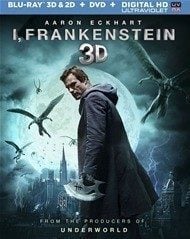 Frankenstein's monster(Aaron Eckhart) wanders the world following his "birth" in 1795 and finds himself in the modern world in which the gargoyles and the demons are fighting an invisible war, unknown to its mortal inhabitants. This brings him into opposition against Charles Wessex(Bill Nighy), a billionaire businessman with a plan to animate corpses by use of the technology that created Frankenstein's monster. Yvonne Strahovski(Chuck) plays a scientist helping Wessex with his research, and Jai Courtney(Spartacus: Blood and Sand) plays Gideon, the commander of the gargoyle armies.I, Frankenstein is the cinematic adaptation of the graphic novel created by Kevin Grevioux(Raze in the Underworld films.) Grevioux appears also in this film as Dekar, the henchman to Bill Nighy's malignant business executive. Stuart Beattie, screenwriter of several films in the Pirates of the Caribbean films, directed this film, in addition to collaborating on the screenplay with Grevioux.Viewers who have not read the graphic novel on which the film is based may feel lost for a good portion of the film. I, Frankenstein conveys a grand mythology in its story without explaining that mythology up front; things become more clear for patient viewers willing to allow the story to unfold. It was never really clear to me why the monster, called Adam in the film, was fighting for the gargoyles instead of the demons, other than irony, perhaps, or maybe because it suited Adam's quest to achieve his humanity, and his soul. This film is filled with action set pieces in which Aaron Eckhart's monster in battle resembles Bruce Lee in his agility much more so than Boris Karloff's lumbering(and still the best) version of Frankenstein's monster. I, Frankenstein certainly has much in common, stylistically and thematically, with the Underworld films, so that fans of Underworld are probably going to enjoy I, Frankenstein as well.

I, Frankenstein appears on Blu-ray in its original 2.40:1 aspect ratio. The CGI imagery is given good service in this transfer. Contrast is excellent with solid blacks and reasonably good shadow detail. Colors tend to be pale rather than vibrant; although this is modern trend anyway, the muted colors are appropriate to the subject matter and tone of the film.I, Frankenstein was not filmed natively in 3D but was converted after the fact, prior to its theatrical release. Post-conversions can be anywhere from excellent to poor, and this one is not on the high end of that spectrum. The best 3D films have multiple layers of depth, and this one usually has 2 layers, foreground and background. Some of the money shots (explosions and the like) use the stereo window more effectively with many more than 2 layers of depth, but these are generally the exception rather than the norm. I have no ax to grind with post-converted 3D films, since some are among the best in 3D when done well, but this is unfortunately not one of the better efforts. A strong advantage of 3D is that it draws the viewer into the illusory reality and makes us believe that we are seeing things as they happen, and forget that we are watching a film. Lens flare destroys that illusion by reminding us that we are seeing film and not seeing reality. I concede the possibility that lens flare may work well in 3D, but it does not work well here, because the lens flare in I, Frankenstein sits flat on the screen without any sense of level or dimensionality.There is also little in the way of pop-out as well. This is not to say the 3D is terrible; quite the contrary, if you are going to see this film at all, I recommend seeing it in 3D rather than 2D. The 3D here is simply not the best that it could be with better post-conversion application.

The default audio is English 5.1 DTS-HD Master Audio. The audio is solid and consistent without any apparent flaws. Dialogue, such as it is, is usually audible over sound effects and musical score, with some good use of the surround channels.

Audio Commentaries: This edition includes 2 separate audio commentaries, the first by writer/director Stuart Beattie and the second by producers Gary Lucchesi, Richard Wright, James McQuade, and Kevin Grevioux.Creating A Monster(12:59): Director Stuart Beattie joins cast and crew in this behind the scenes featurette.Frankenstein's Creature(14:18): Screenwriters Kevin Grevioux and Stuart Beattie, with other members of cast and crew, discuss the duality of Frankenstein's monster and the making of this film.Theatrical Trailer(2:33): This trailer is in 2D, as are all of the special features.Also From Lionsgate(7:15): These trailers for Daybreakers, Conan The Barbarian, The Crow, Fearnet.com and Epix also play automatically prior to the main menu.

I, Frankenstein is a patchwork of pieces, like the monster itself, of other (better) films like Underworld and The Matrix. The action set pieces are executed successfully, even if the narrative structure is not. The film does reward patience by eventually offering explanation and context for its mythology. The video and audio presentation are fine. Although the 3D post-conversion is not the best, I recommend watching the film in 3D since the illusion of dimensionality enhances the film in ways that 2D cannot. The special features will be of interest to ardent fans. I, Frankenstein is recommended to fans of the original graphic novel and to fans of the Underworld films, but will be of moderate appeal to viewers who do not fall into one of these categories.

I can't help but think, based on the review, that this was yet another cynical attempt to cash in on a certain audience, you know, that 13-18 year old males who haven't been many places, seen many things, and for whom the gambits here may be, sort of, a little bit fresh. That is, however much energy the film-makers put into telling the story well, in the end it's kind of beside the point, because the money types are only interested in "servicing" that pre-defined audience. And the Amazon price point ($20 for a new 3-D) gives the game away; nobody expects this to do particularly well, nobody really thinks very many people want it, unless the price point is low enough. Sigh.

If I recall, this movie was in and out of theaters pretty quick. It got poor reviews and I didn't bother to see it. While $20 is where I think a 3D ought to initially sell (boy am I a dreamer), this movie holds no interest for me.

I gave this one a chance and enjoyed it. It really seemed like an extention of the Underworld franchise. Is Bill Nighy in all these movies? Anyway, if you like Underworld you will probably enjoy I, Frankenstein. The price was right. I thought the 3D conversion was was well done and added a lot to the special effects. There is are some nice swirling fire effects when demons die. The main problem with this movie is that it really doesn't say of do anything new. It's kind of a Frankenstein monster of monster movies made up of parts from other films we have already seen. There is a lot of that going around these days.

LFE seemed really hot on this. My sub was overloaded repeatedly.

I finally got around to watching this in 3D last night. Tim is right about the 3D: very mundane and not enveloping enough to truly engage like the best 3D (conversions or native) can accomplish.

I also found the storytelling rather confused. "Adam" (as he's eventually called in the movie) can withstand cold without any noticeable threat to his survival, but a blade can slice his back pretty severely that it needs stitches, yet he can be slammed through several layers of walls and not break a bone or sustain an injury. The physicality of the creature from moment to moment seems to sway with the breeze. Drove me nuts.

We bought this movie at the Day after Thanksgiving sale. It was about 6 bucks. We knew it was coming to Netflix just after Christmas, so we didn't open it. I'm glad we didn't. We took it back, not even worth the six bucks.
You must log in or register to reply here.