I Deal in Danger DVD Review

After putting himself into the national consciousness by playing Sir Lancelot in the original Broadway cast of Camelot, becoming a genuine stage heartthrob, and winning a 1962 Grammy as the outstanding new recording artist of the year, Robert Goulet got predictably snapped up for the movies, but his two starring vehicles did scant business, so it wasn’t surprising when he next signed up for a television series. Instead of opting for a variety show, however, he chose an action drama Blue Light which was a midseason replacement on ABC but unfortunately didn’t move beyond its initial 17 episodes. 20th Century Fox who filmed the series took a page from MGM’s playbook having great success packaging compilation episodes of The Man from U.N.C.L.E. into feature films and made a feature from (probably) three or four episodes of the show and entitled it I Deal in Danger. It’s a very generic title for a not-bad-at-all effort with above average production values and a fine star turn for Robert Goulet. 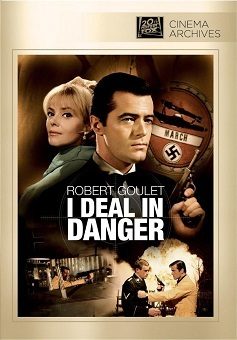 During World War II, the Allies are running an undercover organization code named “Blue Light” in which eighteen Allied spies work undercover posing as defectors supporting the Nazi cause to better get sensitive information and pass it back to the Allies. Seventeen of the undercover operatives have been snuffed out, but the Nazis are having trouble locating the last one. David March (Robert Goulet) is that operative, an American pretending to have renounced his American citizenship and now acting as a Nazi spy bringing back to the Third Reich secrets and plans of the Allies all the while actually gleaning information for the other side and sabotaging German operations as best he can. Very few people are aware of March’s mission aside from his handler Suzanne Duchard (Christine Carère) who acts as his go-between and runs interference for him when the Nazis get too close to discovering his actual mission.

The scripts by Larry Cohen which have been combined to make a surprisingly smooth scenario for this film have two focuses: an attempt to discredit a hard-charging Nazi officer Elm (Werner Peters) who is convinced David March is not who he says he is and to seek out and destroy a secret underground Nazi weapons operation at Grossmüchen. Each of these operations is compelling (the description of a potential Nazi mini-sub which could sail up major American rivers and launch missiles at major cities on each coast and in the heartland is chilling), and director Walter Grauman keeps suspense high while offering the viewer notably outstanding production values that might have been better associated with a feature film rather than a television series. Were it not for the overuse of extreme close-ups (common for television viewers, less used in features), one might not suspect this wasn’t a feature film which might have been used as a pilot for a television series. The problem of eliminating Elm from being a thorn in his side is handled rather astutely in the first third of the movie, and the second part of the movie takes the action from Berlin to Portugal to Grossmüchen (the film was actually shot in Germany which adds to the authenticity of the project’s tone. It doesn’t have the look of a Hollywood backlot) and features some nifty action sequences (though the staging sometimes requires more than a little dramatic license in order to ring true).

Unquestionably a pretty boy (though so were many other TV action stars of the period), Robert Goulet shows he had the physique (several shirtless scenes are scattered throughout the film) and acting talent to pull off being an action star (a shame this show’s failure sent him back to TV variety shows, nightclubs, musical specials, and the theater where he won Broadway’s Tony Award for his next stage appearance in The Happy Time). Christine Carère has some trouble acting in English with brittle, sometimes halting line readings (much of her performance seems to have been looped after the fact), but the producers did a good job casting the suspicious Nazi officers. Both Werner Peters and Horst Frank (who plays Commandant Luber at Grossmüchen) have great command of the screen. Eva Pflug is quite affecting as the scientist Gretchen Hoffmann whom March tries to deter from building the superweapon against the Allies. Donald Harron has an impressive few scenes as another British double agent Spauling who willingly volunteers to sacrifice himself for the greater good, and Peter Capell has a few surprises of his own as noted scientist Dr. Eckhardt who’s being held in prison by the Nazis.

Fox presents this in the television aspect ratio of its original series broadcasts: 1:33:1, but I tried zooming it to 1.66:1 to no ill effect giving it a far more movie-like feel than the original television aspect ratio, and Fox should have considered matting this at 1.66:1 for a feature film disc release. The images are very strong with excellent sharpness and rich color throughout. Skin tones are particularly appealing. Apart from a few stray dust specks, most of the picture quality is pristine, and black levels are stronger than one might expect them to be. The movie has been divided into chapters every ten minutes so this disc has 9 chapters.

The Dolby Digital 2.0 sound mix is decoded by Dolby Prologic into the center channel. This mono mix seems very era-bound but is nonetheless a strong, involving mono soundtrack. Dialogue has been well recorded (though the looping is rather obvious at times), and the staccato music by Lalo Schifrin and the sometimes impressively explosive sound effects blend quite well with it. No age-related problems with hiss, crackle, or flutter are present at all.

This made-on-demand disc offers no bonus material at all.

Baby boomers old enough to remember Blue Light during its abbreviated run on television will likely never see a box set of its one and only season, so I Deal in Danger is likely as close as it’ll be possible to get to some of those episodes for home enjoyment. I Deal in Danger may have a generic name, but it offers above average action for World War II espionage devotees and is certainly worth at least a rental.

This film derivative of the BLUE LIGHT (ABC 1965-66) tv series was the supporting co-feature to the 20th Century-Fox Studios' Hammer Films release ONE MILLION YEARS B.C. (1967) when theatrically released in Toronto in May 1967.

As I haven't seen it since that time I remember precious little about it albeit I immediately recognized when seeing it that I DEAL IN DANGER (1967) was recycled from a number of the parent television show's broadcast primetime network episodes.

I believe that it must have had some widescreen image "scope" to speak of for its theatrical screening.

It's interesting to learn that THE INVADERS (ABC 1967-68) creator Larry Cohen was involved with the show.