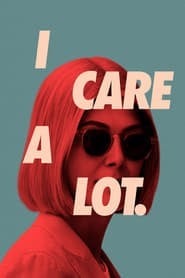 Plot: A court-appointed legal guardian defrauds her older clients and traps them under her care. But her latest mark comes with some unexpected baggage.
-
Marla Grayson (Rosamund Pike) is a professional court appointed caregiver, who is actually just playing the system in order to fleece her powerless wards of as much as she can possibly grab. When she finds a relatively well-to-do "cherry" (Dianne Wiest) with no family, she buys the testimony of a doctor she regularly colludes with in order to take power over the woman's life and finances. Of course, not everyone is what they appear to be and an unexpected aspect of her newest target appears in the form of Peter Dinklage.

I might not have given this movie as much of a chance if I'd never heard about the whole "Free Britney" dilemma, because before that I had no idea people could actually go through something like this. Of course, I Care A Lot is basically a dark comedy, so it plays out a little differently. Most of the movie is a rather entertaining cat-and-mouse game where plenty of things aren't quite as they appear. I've come to realize that any character Dinklage plays is guaranteed to be interesting, and Wiest plays the same character she's been playing for 30 years, but that's probably because she's so damn good at it. She does get to branch out a times here. Pike is also a reliable actor and she more or less reprises her role from Gone Girl. She played both characters extremely well and with plenty of charming nastiness.

I did find myself enjoying most of the movie, that is until it just got weird near the end and seemed to tack on a plot development that hadn't been allowed through the prior twists. So, the end is a little messy, but who knows, upon a second viewing I might find more value in it. That wouldn't be the first time.

I think it'll be worth another viewing sometime, if only to see if my feelings about the ending change.

Genuine question here as I am a bit confused. Is this a standalone singular movie, or a series? I've seen things that seem to indicate both, and never really figured it out.

Jeff Cooper said:
Genuine question here as I am a bit confused. Is this a standalone singular movie, or a series? I've seen things that seem to indicate both, and never really figured it out.
Click to expand...

It's a movie. One and done.

A rare con movie that doesn't flinch in going dark - and keeps getting darker and darker. Marla (Rosamund Pike) is a professional Legal Guardian for the elderly who has has upped the game into a lucrative swindle where she doesn't necessarily wait for her patients to fully need her assistance. Fran (Eiza Gonzalez) is her partner and assistant in the operation. The pair get more than they bargained for when they put Jennifer Peterson (Dianne Wiest) into a nursing home against her will. That action puts her in the bullseye of an interested party in the person of Roman (Peter Dinklage).

The first half of Writer-Director J. Blakeson's screenplay is mostly a smart confidence game. The stakes are clear and Marla's moves and motives are cunning. Once Roman enters the picture, I CARE A LOT becomes less smooth - and, more of a brutal genre picture. Fortunately, Blakeson has a couple of more moves up his sleeve and he guides the picture over most of the bumps along the way. Still, a little more wit and little less bloodshed would only have improved it. Pike is enjoyable in devious GONE GIRL mode, and seems to relish her dark side. Weist gives a slyly effective performance leaving room for Dinklage to chew most of the remaining scenery.

The movie does more to ruin the image of the Nursing Home/Elder Care industry than anybody since Andrew Cuomo - and, that's what gives the story it's bite. It isn't a pretty picture. One's appreciation for I CARE A LOT will largely depend on how dark one likes one's satire. I'm mostly on board with its blackened cold soul.

My wife and I watched it some weeks ago, and we really didn’t like it. It would work as a dark comedy if there were a likable character or two, but there are none. And it veers a bit TOO dark. Truly evil stuff in here.
J

Tommy R said:
My wife and I watched it some weeks ago, and we really didn’t like it. It would work as a dark comedy if there were a likable character or two, but there are none. And it veers a bit TOO dark. Truly evil stuff in here.
Click to expand...

That's what makes it a dark satire. You aren't suppose to 'like' them

JoeStemme said:
That's what makes it a dark satire. You aren't suppose to 'like' them
Click to expand...

Well, for me it just hurt the movie. I’ve seen dark comedies where I like the characters. Very Bad Things is probably the darkest dark comedy that I liked, and it has a lot of characters I found likable.
J

To me, it's only an issue if the filmmakers expected you to like the characters and they fail to evoke that. Here, it was pretty clear they were all to be despised in some way or another

JoeStemme said:
To me, it's only an issue if the filmmakers expected you to like the characters and they fail to evoke that. Here, it was pretty clear they were all to be despised in some way or another
Click to expand...

Yes, I’d agree that the filmmakers are NOT trying to make me like any of the characters, it just makes for a miserable experience watching it. It did have good performances though, so that’s a plus, I guess.

I keep thinking the old mother was going to take revenge. Then that plot line was dropped. It's a perplexing movie to me because the craft level is high, the performances are stellar, but IMO the script is fractured. I watched it all the way through, wasn't sorry I did when it was over, but in four weeks haven't thought about it again once until seeing this thread. So much craft, so much talent. The script just wasn't there. It's movies like this, the ones that almost get it right, the ones that are almost great, that I learn the most from.
Movie information in first post provided by The Movie Database
You must log in or register to reply here.

D
As promised, the Top 12 Movies I Hate But Everyone Else Seems to Love
2 3 4