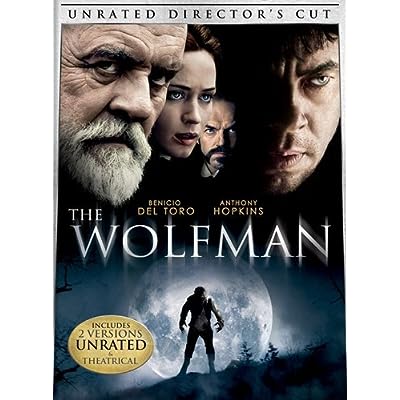 The Wolfman is Universal Studio's latest attempt to revisit their horror classics from the early decades of the film business. To their credit, this is no 21st Century beast, the result of science gone awry like a Green Goblin or Hollow Man. This wolfman is rooted in 19th Century England. The beast is a near-legendary creature...except for the unfortunate fact that the community of Blackmoor is starting to find very real eviscerated corpses in the woods near the town. When Ben, the son of a local nobleman, goes missing, his fiancee, Gwen (Emily Blunt) seeks out the dead man's brother, an actor, Lawrence Talbot (Benicio del Toro) to enlist his help in locating her lover. Talbot initially rebuffs her request (good choice, Larry), but familial loyalty gets the best of him and he returns to to Talbot Hall, a massive estate presided over by Sir John (Anthony Hopkins), father to Lawrence. It's clear that there's little love lost between the two men. What is not clear is Sir John's aloof attitude as he informs Lawrence and Gwen that Ben's body has been found.

Despite warnings from his father, Lawrence decides to investigate his brother's death. He begins by visiting a local gypsy camp that Ben was known to frequent. Of course, Lawrence chooses to conduct his investigation at night...under a full moon...alone. The camp is attacked by 'the beast.' There is much gory death during a very exciting action sequence. Our hero gets away with a nasty would to the neck, but he lives. He's one of the lucky ones...or is he? After a period of convalescence, during which time he is visited by an inspector from Scotland Yard, played by Hugo Weaving, who clearly thinks there is something hinky about our Mr. Talbot. Lawrence experiences a remarkable recovery...just in time for the next full moon.

Do I have to tell you what happens next? Rick Baker was responsible for turning del Toro and a second actor into wolfmen for the picture. His work is masterful and, to the credit of director Joe Johnston, he doesn't spend an extended period of time showing us the change. There's just enough each time. Baker and Johnston chose to make their creature(s) the traditional wolf-man instead affecting a complete shift into a wolf shape. This is the wolfman of the 40s films, biped and humanoid, clad in the tattered rags of clothing he burst from during the change. It's a very satisfying creature.

The film captures the mood of the period beautifully. An early scene of Talbot on stage shows us a crowded, stuffy, matchbox of a theater. You can small the greasepaint. Talbot Hall is a creepy joint, allowed to go to seed as Sir John's grip on reality has clearly been incrementally slipping away. Visually, the palette moves between warm golds and ambers in fireplace-lit pub scenes to cold grays and blues of Talbot Hall and the moors. The film drips of atmosphere.

I wish I could be as generous with the script and character development. After flatly refusing to help his brother's fiancee (Lawrence is sailing to America the next day for a tour of the States), our hero abruptly changes his mind and is on his way to the moors. Huh? Relationships are too quickly and easily established. Gwen gets over her fiance's death fast enough to develop feeling for Lawrence before he is attacked. By the end of the film, she is convinced that her 'true love' for him and save him from being consumed by his 'beastly nature.' The actors do what they can with have they have. Del Toro broods appropriately and Hopkins resists chomping on the scenery. I don't know if that was his choice or at the urging of Johnston, but, in the end, it serves the film to have him play it close to the vest. Blunt, poor thing, is left to dangling in the wind. She's not particularly sexy or sensual. I don't know how she decided to fall in love with Lawrence. I felt bad for her.

To the script's credit, while there is some urgency to get the wolfman on screen, some time is permitted for character development. It's just that the development seems a bit forced. Much of what is coming, it is telegraphed a scene or two ahead. I am pleased to say that there were a few occasions when a surprise onscreen made me jump out of my seat. The film's conclusion was fairly predictable and is highlighted by what amounts to an Ultimate Fighting match, in the octagon, between two werewolves. Sadly, it was more humorous than thrilling. Happily, while this is generally by-the-numbers storytelling, there are enough thrills in The Wolfman to make it worth your time.

The Wolfman is presented in a 1.85:1 anamorphic widescreen transfer. There were no noticeable flaws or artifacts in the image. For a standard DVD, it's pretty impressive. As stated earlier, the color palette alternates between cold grays and blues and a much warmer amber/gold. The difference is distinct and adds to the overall mood of the film greatly.

The soundtrack is presented in 5.1 Dolby Digital. Effects JUMP out of the surround speakers and led me to jump out of my seat! The howls of the beast are bonechilling. Separating of effects and music is distinct, whispers are clearly audible. The audio is one of the most successful aspects of this release.

If you want extras, do not buy this release. There are six 'Extended and deleted' scenes, per the packaging. These are mostly extensions of existing scenes. Only an extension of the climatic fight scene is of any real interest.

The Wolfman is very much like a roller coaster ride: it has clear ups and downs. Rick Baker's work demonstrates why he is without peer in his business. The storytelling is that long haul to the top of the coaster. When we finally get there, and the beast is released, there are some screams. It's quite uneven, though. I don't know if I'd go back to it, but I'm not sorry I gave it one viewing.