How to Train Your Dragon Blu-ray Review

How to Train Your Dragon is unquestionably DreamWorks Animations’ finest film. With a sequel poised to do fine business at the box office this summer, DreamWorks (and Paramount) have released a reissue of the film with a collection of new special features and an upgrade of the audio, though not all of the previously available extras have made it to this reissue.Still, How to Train Your Dragon is among the finest animated films of recent times and should be high on your list to snap up – especially if you have children of appropriate age. 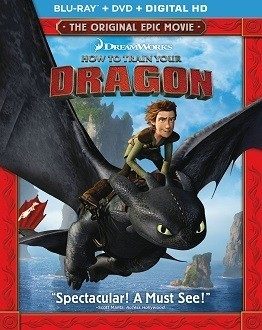 “Don't worry. You're small and you're weak. That'll make you less of a target! They'll see you as sick or insane and go after the more Viking-like teens instead.”

In the village of Berk, a small town perched against the a rock outcropping and the ferocity of the sea, villagers are on constant high alert for the marauding, troublesome, and dangerous ‘dragons’, who frequently raid the village taking food and other livestock and endangering the towns people. The brute Vikings that populate Berk are fierce warrior’s themselves, vigilant in there alertness for signs of dragons, and well-rehearsed, trained, and experienced when the attacks happen. The ranks of dragon fighters is filled with axe wielding, horned-hat adorned characters eager to rid the homestead of the fire-breathing threat. And waiting in the wings – a dragon-fighting succession plan – are the inexperienced and young members of the village. Hiccup, the young and clumsy son of Stoick - Berk’s leader, is perhaps the most eager and the least likely to ever get his act together and survive as a Viking warrior. Despite his best efforts, including building his own contraption designed to shoot down the most dangerous and mysterious of all dragons (a ‘Night Fury’ dragon that moves so fast no-one has been able to catch a glimpse), Hiccup always seems to cause more harm than good, as evidenced during a raid on Berk by the fire-breathing enemy.During the raid, Hiccup rolls out his weapon, and shoots at the elusive Night Fury dragon, but despite being certain that he has hit one, the catastrophe that results from his participation in fending off the dragons washes away any credibility he has. His father, though, is still optimistic. The next day, while he leads the Vikings on yet another venture to find the dragon stronghold and rid Berk of their foe, Hiccup and the other younglings attend training to (hopefully) become the next line of defense. But his curiosity beckons him to search for evidence of the dragon he is certain he felled. And he finds it.The story of How to Train Your Dragon may not be immediately surprising – the weak, underdog child finding a special and secret relationship with something that helps build his confidence and change his life. But what makes this film so much fun is the nature of the relationship between Hiccup and Toothless (the fallen Night Fury dragon). Described as “the unholy offspring of lightning and death itself”, Toothless is a gorgeous creature with intense eyes, limited expression, and distinctly feline behaviors. Hiccup helps Toothless become untangled when they first meet, and during their next meeting, the uneasiness (and Hiccups fear from being told how ruthless these creatures are) becomes assuaged. The communication between Hiccup and Toothless is trial and error; Hiccup’s learning and understanding who this creature is – and what he is not, marks the soft-center of this adventure, and it is welcome and delightfully done. The best family films will also surreptitiously weave morality tales through the adventure and hijinks, and the lesson to not prejudge, to challenge perceptions, and to ask ‘why’ and stand up of yourself in that endeavor, is layered throughout this film along with the staples of building confidence and finding your place in life (following your own path).How To Train Your Dragon went toe-to-toe back in 2010 with Toy Story, vying for the title of best animated film of the year, with its solid amalgam of humor, heart, sincerity, and beyond expectations visual splendor, it soars with thrills, excitement, and friendship. There are ample bouts of goofy excursions, thrilling high-flying adventure, and warmth born of kindred spirits across species. The dynamic between Hiccup and Toothless is beautifully and patiently constructed, giving the mysterious and cat-like Toothless a distinct and not easily tamed character that exists throughout the film as something unique and enjoyable.The cast is uniformly superb, with Jay Baruchel providing Hiccup with his near-raspy bounty of sarcasm with a whimper; Gerard Butler’s bellowing Scottish accent provides the village leader, Stoick, with authority, occasional apoplectic bouts, and an earnest amount fatherly care. Craig Ferguson, a late addition to the voice cast, is stand-out as Gobber, and I can expect that we will hear more of his quick-wit and humor in future animated fare. America Ferrera as Astric, Hiccups somewhat love interest, is solid with bravura and innocents, while the sprightly team of dragon-killer wannabes, Snotlout, Fishlegs, Ruffnut, and Tuffnut, are afforded the highly comedic team of Jonah Hill, Christopher Mintz-Plasse, Kristin Wiig, and T.J. Miller respectively. The voice-talent is lively, spirited, and with great comedy timing.How to Train Your Dragon is terrific entertainment.

Animated films are more likely to achieve excellent results in the high definition medium, and How To Train Your Dragon is absolutely no exception. The 2.35:1 aspect ratio (for non-IMAX presentation) is preserved and presented with a MPEG-4 AVC video codec. The image is lush, bright, bold, and almost luminous at times (particularly the unique fire from the Night Fury). The black levels are deep, there is absolutely no evidence of unnecessary tampering, and the entire image is vibrant from start to finish.There are moments in the film where the animation is of such quality that it appears as near photo-realism, particularly in early scenes between Hiccup and Toothless, the scaly skin on the dragon is slightly reflective, and the detail in the shadowing is superb. During the big finale, there is a fire-ball and smoke, with movement through that plume that looks stunning. Bravo to the visual effects teams and animators for rendering such high quality visuals that we can now enjoy in superb high definition at home.

Paramount Pictures and DreamWorks present How to Train Your Dragon on Blu-ray with a rambunctious English 7.1 Dolby TrueHD audio (as well as French, Spanish, and Brazilian Portuguese 5.1 Dolby Digital). This is an upgrade from the English 5.1 Dolby TrueHD previously available.The bellowing fire from dragons often punch the LFE, the deep booming of Gerard Butlers voice, though dominant in the center channel, manages to boom at times in the bass, and the flying, swooshing, crashing, and aerial somersaulting whip sounds throughout the channels, with great directional effects. Perhaps the highlight for me as a fan of John Powell’s exceptional film scores is the vivacity with which his glorious, powerful, sensitive, and Celtic-influenced score comes across.

This reissue of the highly entertaining, and surprisingly endearing family film, doesn’t add much from the prior release – and the removal of some special features (and relegation of others from the Blu-ray to the DVD) further diminish the value proposition (though the upgrade from 5.1 to 7.1 Dolby TrueHD audio will be pleasing to many). Add to that the failure to make available the 3D version with this re-release (though it is available at a reasonable price from retailers like Amazon), and it’s hard to recommend this for owners of the previous edition.For those that have yet to pick up this title, and either don’t have or don’t care for 3D capabilities, the addition of a digital version (Ultraviolet) and movie cash for a ticket to the sequel opening June 13, 2014, adds enough sweetness to entice a purchase.As a high quality family film, How to Train Your Dragon still comes highly recommended.

Thanks for this review to remind us what a wonderful animated film this is.For those who are 3D ready, the 3D version is certainly terrific, too, and is worth seeking out. It's a shame it wasn't included in this reissue since it's likely there are more 3D capable sets out there now than when the Blu-ray was originally released. Thankfully it IS still available.

I watched the 3D version just two days ago, good movie with an entertaining plot that young and old can enjoy, love the music score, good sound mix and the 3D was fine but not as aggressive as some of Dreamwork's other 3D titles, as everyone at this site knows i like popout and it only had a couple of moments of that, though there was plenty of good depth to the 3D image.

There's not enough here to get me to double dip. And (I've always wanted to write this) No 3D, No Sale!
D

So, the audio overhaul really does make a difference in the dimensionality of the audio landscape or is it so slight that it's really not worth the upgrade for the audio alone? Did you do a scene-by-scene comparison of the older 5.1 track with the new 7.1 track?

I wonder if they did a full Dolby Atmos remix in case the first film would be brought back to theaters in a limited run and this is the 7.1 mix down of that effort. The sequel did get an original Atmos track.

Is the video encode an improvement or is it a direct port from the first Blu-rays?

They completely dropped the animated shorts in the previous Blu-ray only edition and they left them off the Blu-ray here too. Dang it!
You must log in or register to reply here.