How to Train Your Dragon 2 Blu-ray Review

Dreamworks Animation has done feature film sequels for many of its biggest animation hits, but How to Train Your Dragon 2 probably ranks at the very top of the ladder. It’s a funny, warm, exciting, and moving film filled with clever invention and thrilling action but concentrating most keenly on its deeply felt emotions that keep the movie lingering in one’s thoughts long after its conclusion. The film is part of a planned trilogy, and with the warm audience reception for this one, the final chapter seems a foregone conclusion. 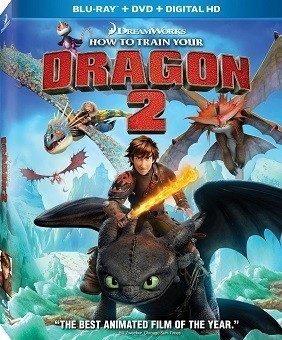 Five years after dragons have been reintroduced into the norm of everyday life among the Vikings of Berk, life in the village seems almost too idyllic, and chief Stoick (Gerard Butler) has plans of naming his grown son Hiccup (Jay Baruchel) as his successor. But when Hiccup gets wind of a dastardly warlord named Drago (Djimon Hounsou) who plans to round up all of the local dragons and pillage Berk, he sets out to try to reason with him without going to war. He manages to outsmart Eret (Kit Harington), a Drago minion who scouts for dragons in the area, but there is a major surprise awaiting him on his way to his fateful encounter with Drago, and Drago himself has a secret weapon which will make Hiccup’s mission next to impossible to succeed.Director Dean DeBlois’ script for the film manages to hit all of the beats that made the first Dragon film so successful as we get to meet up again with Hiccup and his friends and their new dragon companions and see how much accepting the dragons into their society has changed the tone of the entire township. Hiccup and his adorable dragon Toothless are still somewhat outsiders, and they definitely march to the beat of their own drummers, one of the hallmarks of this series that does not often go for the usual or predictable. And that lack of predictability extends to the characterizations of several personages in the story, too: from the complexity of the seeming tough dunce Eret who transforms into almost heroic proportions before the end of the story to the introduction of Valka (Cate Blanchett), a character whose symbiotic relationship to Hiccup couldn’t be more surprising or welcoming. The flying sequences, sometimes almost balletic in their exquisite choreography and execution, are simply stunning throughout (Hiccup has invented a flight suit for himself that allows him to share airspace with his best friend Toothless), and the sight of dozens of multicolored dragons inhabiting the skies at any given moment simply takes the breath away. Yes, the climactic battle pitting good against evil with its expected ebbs and flows follows rather traditional pathways to get to the conclusion, but the lead-up to that which involves a heavy price to pay for major characters in the story is shocking but completely appropriate for the storytelling. The voice casting is very strong for this franchise. Though now playing someone out of his teens, Jay Baruchel still has the canny mix of puppyish playfulness and utter sincerity that so distinguished him in the first film. Gerard Butler as leader Stoick has less to do this time around, but there is one memorable scene with Cate Blanchett’s Valka that’s tremendously moving and unforgettable (even involving some singing that adds considerable spice to this definitely not kid-only toon). Craig Ferguson’s still around as the enormous blacksmith Gobber, and America Ferrera continues as Hiccup’s flinty girl friend Astrid. Djimon Hounsou is the embodiment of all things wicked as Drago, but more nuanced acting comes from Kit Harington as the transformative Eret. Jonah Hill, Kristen Wiig, Christopher Mintz-Plasse, and T.J. Miller all bring lively personalities to the story as friendly rivals for Hiccup.

The film is presented in its theatrical 2.35:1 aspect ratio and is offered in 1080p resolution using the AVC codec. It’s the expected reference quality work we’ve come to expect from Dreamworks with astonishing clarity and lots of detail in the hair, faces, and clothes of these CGI creations. Color is beautifully rich but completely under control throughout with no blooming, smearing, or banding noticeable. Contrast has also been consistently applied. The film has been divided into 32 chapters.A 3D version shown in theatres is also available for purchase, but only the 2D review is offered here.

The DTS-HD Master Audio 7.1 sound mix goes the extra mile presenting this world in all its three dimensional audio glory. Directionalized dialogue pans through the soundstage on several occasions and has been beautifully recorded. It’s never compromised by the stunningly effective music score by John Powell with its delicate but effusive pipes in the opening and full-ranging thunder once the battle scenes begin, and the sound effects offer the expected, sophisticated split effects and booming LFE channel that all terrific animated features today can offer. It’s reference quality stuff all the way.

Audio Commentary: writer-director Dean DeBlois, producer Bonnie Arnold, production designer Pierre-Olivier Vincent, and head of character animation Simon Otto offer an earnest if not terribly exciting commentary during the film.Dawn of the Dragon Races (26:37, HD): a new short featuring the major characters some years before the events of the film as they invent the sport of dragon racing, a sport that also opens the feature film.Fishleg’s Dragon Stats (HD): an interactive encyclopedia that divides the dragons in the film into seven categories with pertinent statistical information about each species of beast available for choosing. Drago’s War Machines (HD): an interactive listing of the five primary war machines used by the film’s villain to wage war on the village of Berk.Berk’s Dragon World (4:19, HD): Hiccup narrates the changes that have come about in Berk since the dragons became friends to the Vikings.Hiccup’s Inventions in Flight (HD): another interactive listing of five inventions Hiccup has devised to make flying on dragons easier and safer.Deleted Scenes (12:00, HD): director Dean DeBlois introduces four scenes which were either cut or trimmed down from the theatrical release.Where No One Goes: The Making of How to Train Your Dragon 2 (54:40, HD): the four-year journey from green light to movie premiere is covered extensively by writer-director Dean DeBlois, procucer Bonnie Arnold, production designer Pierre-Olivier Vincent, actors Jay Baruchel, Gerard Butler, America Ferrera, Cate Blanchett, and special effects supervisor Dave Walvoord, among others.Image Gallery (HD): thirty-two images of concept art, set design, character design, and final artwork can be stepped through by the viewer.Theatrical Trailer (2:25, HD)Promo Trailers (HD): The Penguins of Madagascar, Mr. Peabody & Sherman, The Book of Life.DVD/Digital Copy: disc and code sheet for iTunes and Ultraviolet is enclosed.

A rare sequel that outstrips its original film, How to Train Your Dragon 2 has something enjoyable for every member of the family from entertaining characters and a heart-warming and life-affirming story to a good versus evil scenario that offers more than a few surprises along the way. Highly recommended!

Okay. That is a PERFECT review. Thanks, Matt!

I don't know that it outstrips the first movie, but it is a very worthy sequel.

It underperformed during its theatrical release, so the release of the third film has been pushed back.

Edwin-S said:
It underperformed during its theatrical release, so the release of the third film has been pushed back.
Click to expand...

True enough, but Hollywood still goes by the outmoded model of only seeing the movie as successful if the domestic box office is huge. It doesn't make any sense when 70% of your revenues are coming from overseas, but old habits are obviously hard to break. HTTYD2 underperformed domestically, so the release of the third movie ended up being delayed.

I saw this over the summer, and am not sure why it didn't take off like I thought it would at the box office. Very entertaining, and maybe the most visually-advanced animated film in recent memory.
Excellent review, and I plan to check this out on BD.
G

Yes, but North America is still a pretty darn big market to underperform in. In the end, HTTYD2 did not make the global top 10, and the release date of "3" was indeed pushed back a year, to 2017.

I doubt the studio cares where the money comes from as the North American market becomes a smaller piece of the box office pie each year.

It made $120M more than the first film worldwide. The delay is likely more related to production schedules than box office performance. The studios juggle schedules all the time, especially when they're scheduling so far into the future.

Malcolm R said:
I doubt the studio cares where the money comes from as the North American market becomes a smaller piece of the box office pie each year.

It made $120M more than the first film worldwide. The delay is likely more related to production schedules than box office performance. The studios juggle schedules all the time, especially when they're scheduling so far into the future.
Click to expand...

Or maybe it's because of the shuttering of PDI and the big layoffs at DreamWorks Animation.
You must log in or register to reply here.