DVD Review How I Met Your Mother: The Ninth and Legendary Final Season DVD Review (1 Viewer)

How I Met Your Mother: The Ninth and Legendary Final Season DVD Review

Some television programs because of ongoing popularity and consistency in producing ratings continue long past the point of their productive peak. How I Met Your Mother is one such show. A potent ratings producer to lead off CBS' Monday night line-up, the show over its final two or three seasons became something of a shadow of its former hilarious self. The actors had long exhausted their character exploration and devolved sometimes into shrill caricatures, and the plotlines seemed starved for a creative jolt with occasional exceptions. The ninth and final season of How I Met Your Mother seemed mostly disappointing to fans though the creators in the three commentaries found in this set seemed pleased and proud of what they did this season. 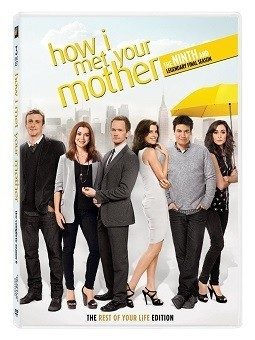 With the exception of the hour-long (well, forty-three minutes) season finale, the entirety of season nine’s twenty-four episodes takes place during the 56-hour weekend of Barney (Neil Patrick Harris) and Robin’s (Cobie Smulders) wedding. Dear friend Marshall (Jason Segel) has been in Minnesota visiting his parents and is desperately trying to get back in time for the ceremony, so Marshall’s wife Lily (Alyson Hannigan) and best friend Ted (Ted Mosby) keep each other company as Ted ponders whether he let Robin get away and Lily holds on to a secret that doesn’t come out until late in the season. Because the ninth season was a unexpected surprise for the cast and crew, filming schedules had to be adjusted (the show is not shot in front of an audience so bits and pieces for the first half of the season were filmed with various members of the cast working separately from one another). That’s why Marshall isn’t seen in group shots with the other characters (apart from clips from previous shows) until later in the season since Jason Segel was making a film during that early part of the season.To say that storylines were stretched to fill a season of episodes within such a short time frame is an understatement (so there are semi-musical segments and one episode done completely as a Dr. Seuss storybook) though the writers resorted to frequent flashbacks and flashforwards more than ever before in filling the episodes to get everyone away if only for a few moments from the claustrophobic inn being used for the entire season. These, of course, allow us to finally get to know the girl (Cristin Milioti) who eventually becomes the ubiquitous mother of the title. Instead of waiting until the penultimate episode to introduce her when Ted meets her at the wedding reception, the writers insert her into flashbacks and flashforwards showing her giving birth to her and Ted’s two children, their vacation trips together (when some ominous foreshadowing is inserted preparing fans for the revelations in the series finale episode which is, to put it mildly, bittersweet but is offered on the disc in both broadcast and alternate versions), and other bits and pieces inserting her into scenes previously viewed in earlier seasons where she was just out of eye line (she and Ted, it seems, had been barely missing each other for years).The ensemble playing of the core cast is still quite wonderful even if the writing made the characters a bit coarser and more strident this season and even though the actors appear to be using cue cards for some of their dialogue in various episodes. And by setting the entire season at this same inn, we were blessed with recurring appearances by Roger Bart as the desk clerk, Billy Zabka (playing himself and trading in on his fame in the original The Karate Kid as a wedding guest who for a time is Barney’s best man), and Robert Belushi in a running gag as a bartender being there at the ready furnishing Lily with freshened drinks every time her glass threatens to be empty. The producers of the show also take the opportunity to bring back a long list of guest stars, some from previous seasons (like Sarah Chalke who was Ted’s fiancé for awhile) and some new to the show this year. Among the many famous faces who turn up for one or more episodes are, among others, Sherri Shepherd (who shares the long car ride with Marshall for the season’s first eight episodes) Edward Herrmann, Anna Camp, John Lithgow, Frances Conroy, Wayne Brady, Bryan Cranston, Chris Elliott, Ben Vereen, James Van Der Beek, Andrew Rannells, Tracey Ullman, Ray Wise, Laura Bell Bundy, Tim Gunn, Jorge Garcia, and Kyle MacLachlan.Here are the twenty-four episodes contained on three DVDs in the season nine set. The episodes marked with an asterisk (*) contain an optional commentary track.*1 – The Locket2 – Coming Back3 – Last Time in New York4 – The Broken Code5 – The Poker Game6 – Knight Vision7 – No Questions Asked8 – The Lighthouse9 – Platonish10 – Mom and Dad11 – Bedtime Stories*12 – The Rehearsal Dinner13 – Bass Player Wanted14 – Slapsgiving 3: Slappointment in Slapmarra15 – Unpause*16 – How Your Mother Met Me17 – Sunrise18 – Rally19 – Vesuvius20 – Daisy21 – Gary Blauman22 – The End of the Aisle23/24 – Last Forever, Parts 1 & 2

The program is presented in its widescreen televised aspect ratio of 1.78:1, and these transfers are anamorphically enhanced for widescreen televisions. While color is spot on throughout, sharpness is often very good but sometimes less so perhaps in deference to some of the actors to soften their appearances. Contrast is consistently maintained, and black levels are fine. Each episode has been divided into 5 chapters.

The Dolby Digital 5.1 sound mix very rarely uses the rear channels apart from occasional music cues. The dialogue is superbly recorded and has been placed in the center channel, and sound effects and the canned laughter seem to occupy the front soundstage mainly. There is very little if any real need for the LFE channel with this series.

Audio Commentaries: the three commentaries all have the same two participants: creators Craig Thomas and Carter Bays. Recorded two months after the finale aired, the men are proud of their work and defend all of their decisions in fashioning the stories for season nine. Obviously, they do divulge some of the surprises to be found in the last few episodes, so first timers to these episodes would be advised not to listen to any of the commentaries until you have seen the entirety of the final season.Deleted Scenes: thirty scenes, some very brief and others running close to five minutes, are contained as bonus features on the three discs. They are presented in montage form though you can choose individual episodes which contain deleted scenes from the menu.“Last Forever” Alternate Version: when choosing the series finale, the viewer may choose the broadcast version or the alternate (happier) version.How It All Ends (10:48): the individual stars in the cast reminisce about the journeys of their characters over the nine years and especially in the way the series had them end up.Cristin Milioti’s Audition (3:02): the actress cast as the “Mother” of the title auditions with Josh Radnor for the role in a scene written for the finale.Behind the Scenes of “Gary Blauman” (4:14): director Pamela Fryman shoots in one take the succession of guest star snippets laid out in a line during a sequence from this episode.Gag Reel (4:15)Promo Trailers: Fox drama series, Modern Family.

While not the greatest final season in the history of television comedy, there were some memorable moments among the filler of the final season of How I Met Your Mother. Though one might have wished for more wide ranging celebratory bonus features for the last go-round (and for the 200-episode milestone which was reached during this season), this is a decent box set for fans who are collecting the entire series run.