A gorgeously set and shot crime drama inside of postwar Japan, Samuel Fuller’s House of Bamboo is such a mixture of the familiar and the offbeat that it sets its own standard. Peopled with a glowing cast of unique character actors playing out one of the postwar era’s most unusual love triangles, House of Bamboo offers rich storytelling and unconventional characterizations amid such directorial flair that it makes for breathtaking viewing and is not to be missed. 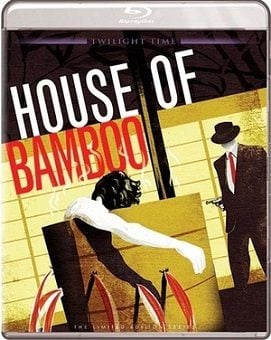 [The following synopsis may contain spoilers for some of the early surprises found in House of Bamboo.]

An ex-solider arrives in Japan with an offer of work from an old buddy of his, but upon arrival Eddie (Robert Stack) learns that his friend is dead and his friend’s widow Mariko (Shirley Yamaguchi) can’t furnish much information on the identities of his killers. Attempting to start his own shakedown racket in Tokyo, he’s abducted by American gangster Sandy Dawson (Robert Ryan) who already has Tokyo sewn up and warns Eddie to leave the city, but later on, Eddie is brought back to Sandy with an offer to join his crew, an offer not enthusiastically received by Sandy’s second-in-command Griff (Cameron Mitchell). Quickly, the balance of power shifts when Eddie becomes Sandy’s favorite and Griff is demoted to number three in the pecking order. When a bank robbery must be aborted before the crew can strike, Sandy suspects that Griff has ratted on the team to the police not knowing that it’s Eddie, who’s actually an undercover military police officer, who has spilled the robbery information to the cops and has been trying to bring down Sandy and his men since arriving in Tokyo.

Due to the Production Code being fully in force during the most repressive era of the 1950s when the film was produced, the Harry Kleiner-Samuel Fuller screenplay setting up the homosexual love triangle at the center of this intense crime drama couldn’t be overt but must be shaded in layers of subtext and innuendo, but it’s clearly present for those willing to look behind the kimono girls who hover around two of the three main male characters but have actually very little to do with them romantically. Years later, Fuller made sure that everyone knew his intentions, but with that knowledge in hand, the film makes a lot more sense understanding those motivations behind the actions especially of Sandy and Griff (the final scene between Sandy and Griff in his bathroom, Sandy cradling Griff's head in his hand as he explains his disappointment, is an acting tour de force for Robert Ryan). Samuel Fuller’s direction is a master class in widescreen framing and interesting shot compositions. He uses Cinemascope to perfection in framing designed to show off the city and its people stretching from end to end, and he takes his camera over the heads of his tall cast members quite often and shows us glimpses of Tokyo on the verge of its economic explosion that are staggering in their impact and clarity. Being the first American studio film shot in Japan after the war, House of Bamboo couldn’t offer viewers any greater ambiance of the city and its people whether we see marketplace shots, scenes in pachinko houses, baronial homes, fields at the foot of Fugi, or the waterways of Tokyo, and that climax on the roof of a department store which houses an extraordinary amusement park for kids is certainly one-of-a-kind.

Robert Ryan’s voice control and minimalistic acting style makes his Sandy one of the screen’s most subdued psychotics and one of his greatest-ever performances. Robert Stack effects the tough guy look and mannerisms that would hold him in good stead in his Emmy-winning role as Eliot Ness in The Untouchables a few years later, but the genesis for it is clearly here. Shirley Yamaguchi offers tenderness and concern as the distraught widow who’s willing to do anything to bring down the men who murdered her husband even if it means she must disgrace herself living with an American without the benefit of marriage. (The vapid final fadeout suggesting a conventional romance for Eddie and Mariko seems likely a bone thrown to audiences who had been denied much in the way of a romance between the leading man and woman throughout the movie, but the film plays better if it simply stops after the rooftop amusement park shootout.) Cameron Mitchell does great work as the jealous henchman resentful of losing his place at his boss’ right hand and DeForrest Kelley as another henchman is also good while Brad Dexter and Sessue Hayakawa in small roles as police authorities assisting with the undercover operation are effective without being standouts.

The early Cinemascope aspect ratio of 2.55:1 is beautifully captured in this 1080p transfer using the AVC codec. A new 4K scan has brought forth a stunning looking movie with sharpness that’s outstanding and color values that will make one sit up and take notice with their solidity and beauty. Skin tones are especially impressive. Black levels are quite something, and contrast remains consistent throughout. The movie has been divided into 24 chapters.

The original four channel sound design is represented here in a DTS-HD Master Audio 5.1 sound mix. It features directionalized dialogue throughout and a beautiful handling of the Leigh Harline background score through the front soundstage. The rear channels are only intermittently used for music and atmospheric effects spillover, but the movie is engrossing enough that one won’t notice their absence very often. No age-related problems are present in the mix.

Audio Commentaries: the informative if somewhat bland Alain Silver-James Ursini commentary has been ported over from the last DVD release, but it pales in comparison to the ebullience and enthusiasm of film historians Julie Kirgo and Nick Redman’s track, by far the more interesting of the two.

Six-Page Booklet: contains a nice selection of black and white and color stills, original poster art on the back cover, and film historian Julie Kirgo’s passionately positive analysis of the movie.

One of the great crime dramas that's not nearly as well-known as it should be, House of Bamboo finds director Samuel Fuller working at the top of his game, and Twilight Time’s Blu-ray release of the film is one of the more exquisite offerings in the company’s catalogue. There are only 3,000 copies of this Blu-ray available. Those interested should go to www.screenarchives.com to see if product is still in stock. Information about the movie can also be found via their website at www.twilighttimemovies.com or via Facebook at www.facebook.com/twilighttimemovies.

Watched this last weekend.... Agree that it's a superb transfer and film.

Terrific blu-ray. Excellent transfer and a fun commentary to boot!

Very excited to have this coming...Robert Ryan is a favourite, of course...I highly recommend the new biography THE LIVES OF ROBERT RYAN by J.R. Jones...

More of his fine film work on blu...Please!

Watched it last night - the transfer is beautiful. It was great to re-visit this favorite looking so pristine.

Pristine transfer and two(!!) audio commentaries make this a must buy, DANG IT!


I'm going to have to wait until Shadows and Fog is released and make on large TT order.

From the screenshots it looks like another one of those Fox BLUE-rays.......

Martin Zandstra said:
From the screenshots it looks like another one of those Fox BLUE-rays.......
Click to expand...

Matt Hough said:
Not at all.
Click to expand...

Exactly. I'm not sure where that 'blue' meme is coming from on this title but it's wrong - the color is perfect.

Watched it Sunday night and really enjoyed it. Started listening to the commentary this afternoon. The transfer looked very good to me with spot on color.

DavidJ said:
Watched it Sunday night and really enjoyed it. Started listening to the commentary this afternoon. The transfer looked very good to me with spot on color.
Click to expand...

Apparently, that's a matter of opinion. I really don't understand the criticism this disc is getting from a vocal minority about it looking too blue, but whatever as I thought it looked great.

Robert Crawford said:
Apparently, that's a matter of opinion. I really don't understand the criticism this disc is getting from a vocal minority about it looking too blue, but whatever as I thought it looked great.
Click to expand...

I guess so. I trust the likes of Mr. Harris and after checking it on two different displays, it looks great to me. So I'm happy. I'm also glad I learned of this fine film and made the decision to purchase it thanks to your recovery thread.

Robert Crawford said:
Apparently, that's a matter of opinion. I really don't understand the criticism this disc is getting from a vocal minority about it looking too blue, but whatever as I thought it looked great.
Click to expand...

Me too, Robert. After I watched the disc, I thought it was bound to be spared the usual Fox-blue criticisms. Then I went online...


Sigh. To each his own, but my eyes do NOT see what some others are claiming. For which I am VERY grateful!

This is one of the sale titles going on right now by TT. I'm very tempted to get this one. I love these old Cinemascope titles, especially the ones that use it to its full effect. Looks like it is highly recommended.

I thought House of Bamboo was solid movie, beautifully filmed. The TT disc is excellent.

skylark68 said:
This is one of the sale titles going on right now by TT. I'm very tempted to get this one. I love these old Cinemascope titles, especially the ones that use it to its full effect. Looks like it is highly recommended.
Click to expand...

I can almost guarantee you won't regret it. Was worth it at full price for me.

Thanks for the recommendation Peter and Ben. I picked it up today along with Conrack. Looking forward to more TT titles. I haven't bought one yet that I've regretted.
You must log in or register to reply here.