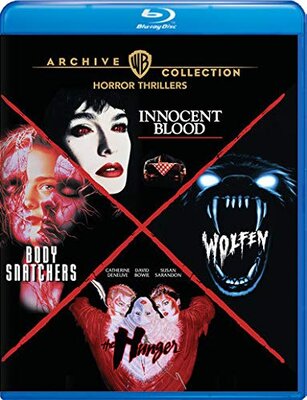 Wow, what a deal. It'll be nice to upgrade my SD of WOLFEN.

I really like Body Snatchers and have been looking at their single release for some time. It's an underrated version of the story and often dismissed or overlooked. While not as good as the 1978 remake it has merit and is vastly superior to The Invasion from 2007 (a title I'll likely never upgrade). To get 3 other passable "horror" films in the package for just a few $$ more than that one title is super!

Wolfen is an outstanding film. Very scary. It’s a good adaption of the book by Whitley Streiber.

Johnny Angell said:
Wolfen is an outstanding film. Very scary. It’s a good adaption of the book by Whitley Streiber.
Click to expand...

Yes, I didn't recall liking the film much from when I was younger, but picked up the stand-alone blu-ray a couple years ago and really loved it. As I recall the blu-ray also looked very good.
You must log in or register to reply here.