Homefront beats up the bad guys on Blu-ray but there’s no getting around the problems of this leaden, bloodless adaptation of the Chuck Logan novel. Fans of Jason Statham or Sylvester Stallone should be cautioned that this is not the 80s action movie throwback they’ve been promised in the various trailers and publicity. What we have here, sadly, is a misfired attempt to translate the Phil Broker novels into a current actioner – with a series of poor choices undermining the whole enterprise. Between the casting, the writing, the direction, and even the use of location, the movie just doesn’t come together. The Blu-ray presentation provides solid picture and sound, along with a small collection of deleted material and a quickie featurette as its only extras. 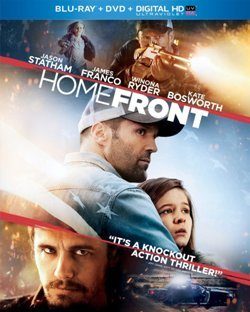 Homefront is presented in a 1080p AVC 2.40:1 transfer (@ an average 33 mbps) that presents the movie in satisfying high definition. On a technical level, this is a solid Blu-ray. The various Louisiana locations are displayed in rich detail, both during daylight and at night.

Homefront is presented in an English DTS-HD Master Audio 5.1 mix in English (@ an average 4.1 mbps, going up to 5.4 during the bigger action moments), which is big and noisy when it needs to be, and atmospheric at other times. Scenes of Broker and his daughter riding through the woods are nicely augmented with surround sound.

The Blu-ray presentation of Homefront comes with a few minutes of deleted material and a single featurette that covers very little ground. The Blu-ray packaging also includes the DVD of the movie.Deleted Scenes – (8:38, 1080p) (AVAILABLE BOTH ON DVD AND BLU-RAY) – About 8 ½ minutes of deleted material is presented here in an unchaptered pile. Some of this is additional driving dialogue between Statham and Vidovic, showing that the various car scenes were shot onstage in front of a greenscreen. The final few minutes present an alternate ending past the movie’s vicious punchline – with a denouement that leaves the viewer wondering if Phil Broker really is that stupid, or if he just thinks that all the villains he’s just fought are even stupider than he is.Standoff – (2:41, 1080p) (AVAILABLE BOTH ON DVD AND BLU-RAY) – This quick featurette mostly consists of clips from the movie, interrupted by really quick soundbites from Jason Statham, James Franco and Sylvester Stallone. Strangely enough, Stallone seems to think he’s written a much more complex character study than he actually has. DVD Copy – A second disc is included in the package, holding the standard DVD of the movie, presented in standard definition in an anamorphic 2.40:1 picture with Dolby Digital 5.1 sound in English and Spanish (448 kbps). The deleted scenes and the featurette are included. There is also a preview menu, including trailers for End of Watch, Hit & Run, Jobs, The Host, Machete Kills, Side Effects, Killer Elite and The Grey, most of which are Open Road productions as was this one.Digital Copy – Instructions are included in the packaging for downloading a digital copy of the movie to your laptop or portable device. Subtitles are available for the film in English, Spanish and French. A full chapter menu is available for the film.

Homefront sadly fails both in its aspirations to be a throwback to 80s and 90s action thrillers and to be a more complex examination of the characters to be found in those movies. Given how far short the movie falls, I can’t even recommend it for rental for the curious. Fans of Jason Statham and Sylvester Stallone are more likely to be disappointed with what they see here. And fans of the Chuck Logan books will have a much more negative reaction.