Perhaps the least ingratiating or creative entry in the DreamWorks Animation canon, Tim Johnson’s Home borrows a bit from E.T. and other sci-fi films and television shows in a vain attempt to create a charming, heart-warming fish-out-of-water comedy. It’s all very pleasant and family safe, but the raucous sense of mischief which has often marked DreamWorks’ particular animated features is barely present this time out, and the animation is among the least detailed and impressive of any of their products. The company really seems to be struggling to connect to an audience that it once had in its hip pocket. 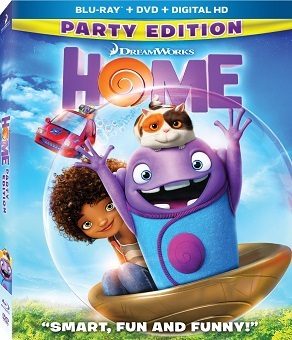 Fleeing from their sworn enemy the Gorg, an alien race known as the Boov have chosen Earth as their refuge. Leader Captain Smek (Steve Martin) has all humans deposited into Australia so the Boov can set up shop on the planet on their own terms. Misfit alien Oh (Jim Parsons), however, in trying to make friends when no one around him cares to get to know him, sends a text message throughout the galaxy announcing a party he’s planning to throw simultaneously alerting the Gorg to the Boov’s whereabouts. Announced as a traitor, Oh must flee from his own race and while on the run meets the one human left behind after the transferal, a pre-teen named Tip (Rihanna) who’s just as lonely and misunderstood among her neighbors as Oh is with his people. Oh promises to reunite Tip with her mother (Jennifer Lopez) in Australia, and if he can get to a terminal, he can cancel his party invitation before it reaches the Gorg and brings doom on them all.

DreamWorks has dipped into this misfit well many, many times in previous movies like Shrek, Kung Fu Panda, How to Train Your Dragon, even their first foray into CG animation Antz (which happens to have been directed by Tim Johnson who also helms this picture). The script by Tom J. Astle and Matt Ember based on the novel The True Meaning of Smekday by Adam Rex features a fair share of comic missteps for Oh (sampling urinal cakes and “lemonade” in a gas station bathroom are among the funnier but still obvious gags), and the gradual building of trust and feeling between the two misfits Oh and Tip follows predictable paths but is nevertheless admittedly sweet and involving. But the plot strands seem very simplistic this time out, and major set pieces like Oh and Tip’s escape from their pursuers in Paris and the climactic face-to-face between Oh and the Gorg leader (Brian Stepanek) don’t have quite the snap and thrill that can be found with the usual DreamWorks hullabaloo. Additionally, while there is less raunch here than in the previous pictures (they do manage to squeeze in one fart joke as Smek consumes a football), the humor quotient is undoubtedly reduced in this entry.

Using a kind of fractured syntax and some odd English euphemisms, Jim Parson’s Oh is somewhat off-putting in the early going but grows into a more lovable and understandable creature later (the purple-colored Boov change color according to their moods so when they’re green, they’re lying; red when they’re angry making for one of the more stylish decisions made for the animators). Rihanna’s Tip is feisty and often implacable (as pre-teens have a tendency to be), but we do sense the loneliness she’s feeling and the hurt in her eyes and heart that she doesn’t fit in anywhere. Jennifer Lopez offers a warm portrait as mother Lucy. Matt Jones as Oh’s “best friend” Kyle (he’s really just one of the few who will speak to him) gets off a few funny lines. Steve Martin steals all of his scenes as the outwardly brave/inwardly cowardly commander Smek. As you can see, the movie seems underpopulated as well as being a bit deficient in humor and plot complexity.

Framed at its theatrical aspect ratio of 1.85:1 and offered in 1080p resolution using the AVC codec, the transfer is as solid as a rock with superb sharpness, outstanding and fiercely stable color, and consistent contrast throughout. Despite bright, bold colors, there is no blooming. There is no banding present, and the black levels of space are rich and inky. The movie has been divided into 24 chapters.

There is also a 3D version of the film shown in theaters available on Blu-ray.

Despite a DTS-HD Master Audio 7.1 audio track, this is one of the least aggressive sound mixes available for a CGI animated feature. While there is directionalized dialogue used on occasion (most of the speech has been sent to the center channel) and the succession of sixteen pop songs (including efforts by stars Rihanna and Jennifer Lopez) and the background score by Lorne Balfe and Stargate get a nice spread through both the fronts and rears, atmospheric effects seem a little underpowered in the mix, and bass which is often a hallmark in DreamWorks’ pictures isn’t especially impressive here apart from the one climactic use of it.

Best Party Ever! (1:01, HD): an introduction to the bonus features on the disc.

Oh’s Shake Your Boov Thing (2:56, HD): Oh gets down and boogies for your entertainment.

“Feel the Light” Music Video (4:10, HD): co-star Jennifer Lopez performs one of her songs used in the movie.

Oh’s Boovy Jukebox (28:09, HD): the viewer can watch any or all of the sixteen background song sequences in the movie.

Oh’s Costume Party (HD): an interactive feature in which the user can dress both Oh and Smek in special colors and attire.

This Is Being Boov (2:53, HD): a quick guide to the characteristics of the typical member of the Boov civilization.

Testing Lab (2:04, HD): the Boov try some typical Earth items in their lab to discover their usefulness.

Deleted Scenes (26:05, HD): director Tim Johnson introduces each of the five planned scenes that didn’t make it into the finished film featuring some CG animation and hand drawn storyboards.

Stars of Home (1:32, HD): a ridiculously brief bit of talk about their characters from the film’s stars Jim Parsons, Rihanna, Steve Martin, and Jennifer Lopez.

Gallery (HD): two dozen color stills from the movie which the viewer can step through.

Home is certainly a pleasing animated family comedy, but it’s perhaps the least memorable of all of DreamWorks’ cartoon feature efforts with neither graphics work, sound, or comic inspiration especially notable this time out.

I sat through this drek at the theater. To me it's forgettable, made for TV/DVD kind of fair only the youngest of audience members would like IMO.


As an adult viewer, I found it to be incredibly lacking and totally forgettable. 180 opposite of many other very good animated movies like mentioned about (Shrek etc).

This film really was a disappointing entry in the Dreamworks canon. Dreamworks, as an animation studio, is already being looked at as a dead horse by a lot of people in the animation industry and this film didn't do anything to change that view. This is probably their most child centric film ever, in terms of targeted demographic.


Among other deficiencies, casting Jim Parson as the lead character was a big mistake. His voice was so distinctive that all I heard was Sheldon whenever the Boov opened his mouth.


Dreamworks Animation has reportedly stated that they think their box office woes are due to their features being too adult orientated. They believe that the animation demo is now skewing younger so they are aiming to make their films appeal more and more to just kids. If this mediocre film is any indication of what they plan to release going forward then I expect we will be reading about DWA declaring bankruptcy in the not-too-far-off future.


Edit: There was one scene in the film that was impressive, at least to me. It was the scene with the Eiffel Tower.

I have to agree. As an adult who can enjoy many other animated entries that entertain both kids and adults, this one is strictly aiming for the kiddies and was an absolute insult to my intelligence.


It's odd in this case because the book this was based off is a pretty good launching pad for some subtler satire and wit, similar to a Dr Suess book. But what we got was the most uninspired crap I had seen. It kind of makes me dread ever seeing Minions because this movie was an obvious attempt to ape their appeal.


I was starting to think that maybe I completely outgrew animation entirely. Then I happened to rent Box Trolls shortly afterward, which just convinced me that Home was simply a poor, lackluster animated film rather than personal bias against such films.

It kind of makes me dread ever seeing Minions because this movie was an obvious attempt to ape their appeal.
Click to expand...

Minions is no Despicable Me - if you go into it looking for a lot of character development along with the humor, you are going to be disappointed. However, as a straight comedy, Minions is worth seeing. Be sure to stick around to the very end of the credits or you will miss some of the animation.
You must log in or register to reply here.