As the liner notes for the Redwind Productions’ Blu-ray release of Michael Todd, Jr.’s Holiday in Spain so wittily put it, the movie was originally released in 1960 as Scent of Mystery in a then-new aromatic process called Smell-O-Vision and, after its failure, was deodorized and re-edited for release in Cinerama theaters as Holiday in Spain. It’s a narrative film, a quasi-mystery/thriller (with the expected travelogue overtones), and it’s not a half bad one at that with some surprising twists in the film’s second half even if it does seem to take a bit of a long time to get to them. Brought back from the dead in a striking new remastered reconstruction attempting to bring the film as close as possible to its original roadshow glory, Holiday in Spain provides some laughs, some great scenery, and a fun little mystery all in one package. 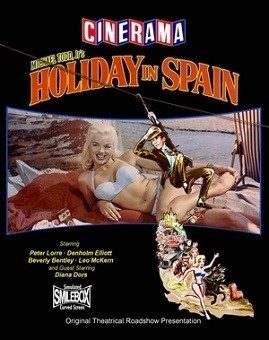 On a vacation in Spain, espionage author Oliver Larker (Denholm Elliott) becomes convinced by town drunk Johnny Gin (Liam Redmond) that a pretty American tourist named Sally Kennedy (Beverly Bentley) is about to be murdered, so he and a very accommodating taxi driver Smiley (Peter Lorre) travel around southern Spain attempting to alert her to the danger. They’re shadowed by the sinister Baron Saradin (Paul Lukas), and a number of other suspicious characters – Sally’s brother (Leo McKern) and sister-in-law (Mary Laura Wood), Sally’s lawyer (Peter Arne), among others – also don’t seem completely trustworthy. Even when they eventually find Sally, she’s at first not completely convinced of the danger and later, once she realizes the threat is real, attempts to flee from the helpful duo in order to save their lives thus further jeopardizing her own.

William Roos’ screenplay takes advantage of the Spanish locations to whisk the viewer all around cities and towns ranging from Granada and Pamplona to Seville, all captured magnificently by the widescreen point-of-view photography of John Von Kotze (supervised no doubt by the film’s director, the former Oscar-winning cinematographer Jack Cardiff). But all that touring of the countryside searching for the elusive Sally tends to drag the first act of the story rather badly even though there are some marvelous action set pieces scattered through the movie including a character’s crushing by wine barrels, Oliver’s dodging a sniper in a grass field in the best Hitchcockian tradition, the running of the bulls at Pamplona, and a couple of aerial flights (one by a butterfly in the film’s opening and later in a single prop plane where we get temporarily turned on our heads to great effect). The mystery seems rather obvious through about 2/3 of the running time, but then the script pulls off a couple of nifty twists on the audience making the second act really one worth seeing. With this reconstructed roadshow presentation, we’re given an overture along with entr’acte and exit songs by Eddie Fisher. One must also mention the deliriously delightful end credit sequence produced exclusively for this Blu-ray release by Cinerama remastering specialist David Strohmaier, a completely charming sequence to end things on a cheerful, upbeat note.

Denholm Elliot offers a perfectly acceptable performance as the enterprising author attempting to ape in real life the heroic exploits of his master spy creation Derrick Carson (the film employs a great deal of internal narration as we hear his thoughts as he goes about his risky business; possibly added to aid in continuity, the banter is only occasionally witty and sometimes a bit of a chore). But hearing in the commentary that David Niven was first choice for the part helps one realize that at this point in his career, Elliot lacks the star power and on-screen charisma to fully succeed in carrying the movie. As the cabbie, Peter Lorre, who was not well during the months of production, is reliably amusing if a bit understandably lacking in verve. Beverly Bentley is fetching as Sally but also lacks star presence for such an important role (especially in the second half). Paul Lukas is oily sinister as the dashing baron, and Leo McKern abets nicely with some gruff, grouchy behavior. The voluptuous Diana Dors who gets very prominent placement on the disc cover and inside photos has what amounts to a cameo on the beach early in the movie. Look fast because she does not return.

Brought back from the obvious brink of extinction, the film transfer (Smileboxed and in 1080p using the AVC codec) looks as good as it’s ever going to look. At its best, sharpness is exceptional, color hues striking (reds come through especially well), and flesh tones believable. But the digital tinkering necessary to remaster the film into something commercially viable sometimes leaves us with a digital looking image and with color values anemically compromised. Black levels vary depending on the amount of deterioration in the original elements, but again at their best can be surprisingly rich. Contrast varies sometimes from shot to shot but is as strong as the elements allow. The film has been divided into 12 chapters.

The disc offers DTS-HD Master Audio 5.1 and Dolby Digital 2.0 sound mixes. The lossless mix which I listened to exclusively does a wonderful job with what were at one time eight track elements (six track masters were used in this reconstruction). Dialogue is directionalized throughout (though the sync sometimes wobbles with what was obviously a great deal of looping). Sound effects often have great presence (without ever compromising the dialogue) and feature impressive pans across and through the soundstage on numerous occasions. If the bass is occasionally a trifle weak (it's not weak at all in the enclosed soundtrack album), Mario Nascimbene's jaunty score gets a great spread through the surrounds and is a tremendous pleasure throughout.

Audio Commentary: producer and film/music historian Bruce Kimmel, reconstruction specialist David Strohmaier, and actress Sandra Shahan have a great, chatty time discussing their experiences with the movie either as audience members or part of the original cast or the remastering crew. Though Ms. Shahan has much less to say than the two gentlemen, all combine to make this a delightful discussion worth listening to.

Holiday in Spain Location Short (14:37, HD): reconstruction and remastering expert David Strohmaier offers then and now shots of some of the film’s famous locations in an entertaining travelogue through the film’s diverse settings.

Missing Scenes and Original B Roll (10:03, HD): three missing scenes and a sequence of B-roll shots all in montage.

Susan Todd Interview (15:11, HD): the daughter of the film’s producer was only two during production, but she talks about her father’s career and shares some mementos from the film she now has in her possession.

Slideshow (9:57, HD): a montage of black and white stills and color lobby cards and poster art for the movie.

Cinerama Trailer Gallery (34:21, HD): may be viewed individually or together in montage, the newly produced trailers for This Is Cinerama, Cinerama Holiday, Seven Wonders of the World, Search For Paradise, Cinerama South Seas Adventure, Windjammer, Holiday In Spain, and The Golden Head.

Original Soundtrack CD (35:37): produced by Kritzerland, here is the soundtrack recording for Scent of Mystery.

A delicious surprise, Holiday in Spain on Blu-ray offers a tremendous bargain for the money: the completely restored and reconstructed roadshow movie in simulated Cinerama smilebox, the soundtrack CD of the film’s delightful music score by Mario Nascimbene, and a reproduction of the original souvenir booklet. It’s available exclusively now at Screen Archives’ website, so those interested should go to www.screenarchives.com.

One of my favourite blu-ray viewing experiences of 2014.

I love the Cinerama Blu-rays. This is a must-have for me.

Before loading this disc, I knew nothing - and I mean nil, nada, nyet - about this formerly lost chapter in CINERAMA history. So special thanks to Sandra S., Dave S., and especially Bruce K. for their indispensible retrospective commentary. What an all-round great cinema-archeological release!

TCM will be showing this film 8/24 at 5:45PM EST. Funny that they have the original title Scent of Mystery listed. I'm guessing it's the same as the Blu-ray. They have the AR as 2.59:1. RolandL said:
TCM will be showing this film 8/24 at 5:45PM EST. Funny that they have the original title Scent of Mystery listed. I'm guessing it's the same as the Blu-ray. They have the AR as 2.59:1.

We delivered the film in Smilebox

Before Screenarchives 15 titles for $15 each sale, Holiday in Spain was 2nd in their Top Weekly DVD/Blu-ray titles.

Interesting that they showed it in Smilebox though I was disappointed the sountrack was only mono. Am I correct in assuming it originally had 6 track mag sound? As a movie not much.... interesting to see such a young Denholm Elliot.... it wouldn't say it stunk (even in this unscented version) but it was awfully bland.

Jim*Tod said:
Interesting that they showed it in Smilebox though I was disappointed the sountrack was only mono. Am I correct in assuming it originally had 6 track mag sound? As a movie not much.... interesting to see such a young Denholm Elliot.... it wouldn't say it stunk (even in this unscented version) but it was awfully bland.
Click to expand...

We delivered a 5.1 restored sound mix that sounded great on the Blue ray and in Theaters but they did some kind of digital sound processing at TCM that muted some sound efx. and even dialog. Some dialog had a metalic sound to it.

They now know about the problem. Before another Broadcast it will be fixed.

Great news. It certainly looked great. I hope they will be broadcasting more of your Cinerama/Smileboxed restorations. And thanks as a film buff for all your work in bringing these films to blu ray in the best possible form. Was on TCMHD today. Looked and sounded great! Has the directional dialog that I like.

RolandL said:
Was on TCMHD today. Looked and sounded great! Has the directional dialog that I like.
Click to expand...

Was watching it too....very nice.
You must log in or register to reply here.