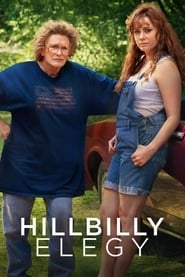 
Tagline: Inspired by a true story three generations in the making.

Plot: An urgent phone call pulls a Yale Law student back to his Ohio hometown, where he reflects on three generations of family history and his own future.
Give Ron Howard credit. In a time where A List Directors keep turning more and more away from adult dramas, he still plugs away at them (SOLO, of course, was an exception - and it was a pinch hit for hire movie). Now, how Howard approaches the material can certainly be questioned.

ELEGY is based on a memoir by J.D. Vance about a Yale Law student who grew up in rural Ohio and had "Hillbilly" roots in Kentucky. Vanessa Taylor's script uses a flashback structure which moves from the present day with J.D. (played by Gabriel Basso) doing interviews for a summer scholarship to his memories of growing up. The flashbacks heavily emphasize his mother's (Amy Adams) troubled life including drug addiction and, in turn, her testy relationship with her crusty mom (Glenn Close). The flashbacks are often so painful that the viewer gets anxious whenever one feels a flashback coming on -- OMG! What horrible event are we going to witness next?!

Adams and Close throw themselves into their roles, sometimes veering into over the top territory. The layered makeup and fright wig hair add to the exaggeration. But, give the actresses credit - they largely succeed even when the script and Howard's direction fails them. Haley Bennett is effective as J.D.'s sister and Frieda Pinto is decent as his girlfriend, even it's a stock role. Basso lacks the finesse to give the character dimension.

The real J.D. Vance may have made a persuasive case in his book, but, judging HILLBILLY ELEGY just by what is on screen isn't convincing. His theory being that his family is still scarred by being deemed "Hillbillies" - a malignant stigma that must be exorcised. In the movie it feels hollow and forced. Melodramatic to the Nth degree. Ron Howard may have been born in Oklahoma and spent 8 years in "Mayberry", but, you'd never know it by watching this movie. He seemingly has no feel for the material, nor the people it portrays. It's "Hollywood" all the way.

How to add movie info. Just a suggestion.

Tino said:
How to add movie info. Just a suggestion.

I've tried to figure it out but it never seems to work for me. Thanks. Hope an admin can adjust
Movie information in first post provided by The Movie Database
You must log in or register to reply here.