Like any other motion picture company, Disney has never been hesitant about mounting sequels to its most successful pictures. Robert Stevenson's Herbie Rides Again came five years after the astounding success of its parent movie The Love Bug, and it’s even more innocuous and insignificant than its predecessor. Regardless, it managed to be one of the top five grossing movies of its year and pleased countless numbers of people. Loaded with slapstick, cardboard heroes and villains, and a car that grows more magical with each successive movie, Herbie Rides Again at least gave half of Hollywood’s notable character actors a paycheck. 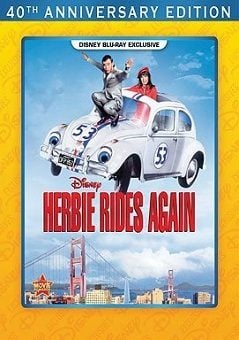 Obsessed with building the tallest business structure in the world, conglomerate billionaire Alonzo Hawk (Keenan Wynn) needs to gain the small parcel of land which houses an old firehouse occupied by elderly Mrs. Steinmetz (Helen Hayes) and her granddaughter Nicole (Stefanie Powers) before he can proceed with construction. When his battery of mature lawyers fails to gain her signature, he sends his young, clean-cut nephew Willoughby Whitfield (Ken Berry) to charm her out of the place, but instead, Willoughby is charmed by the lady and her lovely granddaughter and her guardian angel, Herbie, the Volkswagen Beetle who still dreams of its championship racing career. With his nephew’s failure, Hawk declares all-out war on Mrs. Steinmetz which will require Herbie to gear up to take on the megalomaniac and beat him at his own game.

Producer-screenwriter Bill Walsh comes up with a continual series of face-offs between Herbie and Mrs. Steinmetz’s enemies, combat which will require the little Bug to race around San Francisco and visit many of its most famous structures including taking a swim off Fisherman’s Wharf and scaling the Golden Gate Bridge. Herbie must also fly across rooftops and even fit onto a window washer’s scaffold in order to zoom into Hawk’s executive offices on the 28th floor. Amid all this Disney magic, there are plenty of slapstick antics involving extra large birthday cakes and soap suds, but the climactic assemblage of Beetles to combat Hawk’s army of bulldozers doesn’t quite live up to the expected hype. Of course, there are chaste romances for both Willoughby and Nicole and even Mrs. Steinmetz gets a beau, Mr. Judson (John McIntire) who hitches a ride on board Mrs. Steinmetz’s retired trolley car which, like Herbie, has a mind and will of its own (ditto for a jukebox which manages to tag along for the ride, too). Returning after helming the first film, Robert Stevenson keeps things constantly moving (even if he has to pad the film’s running time with clips from The Love Bug as Herbie dreams of his racing triumphs), and he certainly lets the battery of famous character actors on board, some of whom say nothing but glower and grimace when the camera is rolling, do as they like.

The leads certainly don’t have to delve into any deep emotions in playing these superficial characters, but they’re all pros and work well within the fantasy framework of this kiddie comedy. Keenan Wynn is especially blustery as the heavy everyone loves to hate, and Helen Hayes is his polar opposite, almost always cheerfully optimistic and rarely raising her voice thus trading on the good will her precocious comic turn in Airport which garnered her a second Oscar brought her. As for that barrage of character actors, besides those already mentioned, just look at who’s around, many for only a scene or two: Raymond Bailey, Liam Dunn, Huntz Hall, Vito Scotti, Dan Tobin, Chuck McCann, Richard X. Slattery, Iggie Wolfington, Herbie Faye, Burt Mustin, Alvy Moore, and Fritz Feld, among many others.

The film has been framed at 1.66:1 and is presented in 1080p resolution using the AVC codec. Sharpness is mostly outstanding throughout the presentation apart from some soft, grainy flashback clips from The Love Bug and an occasional long shot. Color is nicely balanced and suitably saturated with realistic and appealing skin tones. Contrast has been consistently maintained, and black levels are more than adequate. The film has been divided into 12 chapters.

There is a lossless encode present with the disc: DTS-HD Master Audio 5.1. The mix, however, offers almost nothing in the rear channels and is heavily directed toward the front soundstage. Dialogue is always clear and is never compromised by the piping George Bruns background score or the atmospheric effects used throughout. The volume level of the encode seems a trifle underpowered, however, and might require some adjustment for more comfortable listening levels. There are no age-related problems with hiss or other anomalies.

There are no bonus features included with this specialty Blu-ray disc.

Audiences obviously loved the concept of a magical Beetle, enough to make Herbie Rides Again a significant box-office hit and generate more sequels even though the freshness of the concept even in only the second film was starting to wear thin. The movie is offered as part of the Disney Movie Club (www.DisneyMovieClub.com) though you can certainly find it offered for sale with varying prices at Amazon (see below) and through other marketplace sellers.

This was the first movie my dad ever brought me to see. He had owned a Beetle in the early 60s (I've heard many an "adventure story" over the years about his time with it) and thought it would be fun to watch a movie starring a Beetle. I have fond memories of that outing, as well as of the time we watched the original on TV (not long after going to the cinema for this one, if I recall correctly). I'm not sure I want to tarnish the memories by viewing this with "adult eyes", so I think I'll just live with the memories. And my kids are too old now to recreate the experience. Ah well.


(although, Stefanie Powers in hi-def...hmmm ). 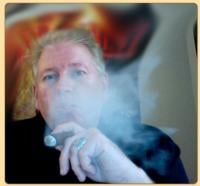 I am adding these vintage Disney flicks from my childhood to my collection, but really wish Disney would at least include a couple special features like the original movie trailers or things they have in their archives, let alone the potential for current interviews with cast members, etc.
Reactions: MatthewA

I have fond childhood memories of this movie too. I saw it first run in 1974 at a drive in with my mom and dad at 8 years old and still remember it well. Enough that I also remember that the co-feature was Disney's "The World's Greatest Athlete" from 1973. So lets get a blu of that one so I can recreate the double feature