Love is in the air for several of the characters (including the title automobile) in Vincent McEveety’s Herbie Goes to Monte Carlo. It’s the third entry of the series (there would be one more), and the law of diminishing returns has definitely set in with overly familiar situations and only mild comic relief from a handful of reliable character actors. Audiences were beginning to tire a bit of the lovable Bug, too. While the two first were among the top five movies at the box-office during their respective years, this third film could only manage 20th in the list of top pictures of its year. 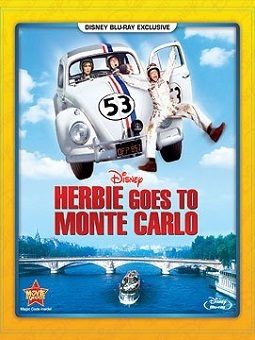 Determined to make a comeback on the international Formula racing circuit, Jim Douglas (Dean Jones) reclaims Herbie and enters him in the Trans France Race which will take them from Paris to Monte Carlo. Herbie seems revved up to dazzle the French until he catches sight of a sleek Lancia named Giselle owned by the fiery Diane Darcy (Julie Sommars) where it’s love at first sight, Herbie reduced to a pitful, shaking hulk of nuts and bolts. With his mechanic Wheely Applegate (Don Knotts) at his side, Jim must use ruses and subterfuge to get Herbie’s addled spark plugs back on racing, and their efforts are hindered by a pair of bungling thieves who have robbed a Paris museum of a $6 million diamond and hidden it in Herbie’s gas tank. They’re trying everything they can think of to stop Herbie before he sets off for Monte Carlo.

Lovesick characters, bumbling thieves, a crooked police inspector, bullying and overconfident competitors: not exactly original creations from the pens of Arthur Alsberg and Don Nelson who wrote the screenplay, and even with a well-trained and experienced slapstick artist like Don Knotts on board to help things out, there is little inspired tomfoolery here making this the least humorous of the Herbie movies. As he’s done before, Herbie gains revenge on his detractors by squirting oil on their feet or slamming his doors into their persons, all gags we’ve seen in the previous pictures, and the little car seems impervious to any real damage surviving a massive dunk in the Seine and an avalanche of huge rocks cascading on top of it, always remaining in top running order. Perhaps there’s a momentary smile afforded to the lovestruck autos while they putter around a park or take a leisurely stroll by the Seine, but it’s really criminal that the writers have left actors Roy Kinnear and Bernard Fox high and dry with little in the way of humorous material or that the exasperated dual relationship between the French Inspector Bouchet (Jacques Marin) and his right-hand man Detective Fontenoy (Xavier Saint Macary) is likewise underwritten. Veteran director Vincent McEveety keeps things moving even if the film at 105 minutes is a bit too long for its lack brilliant comedy, and once the actual race to Monte Carlo begins, the movie has a long 42 minutes of barely eventful plot left.

Dean Jones’ character Jim Douglas was married at the end of the original entry The Love Bug, but there’s no mention of a wife here as Julie Sommars becomes his primary object of infatuation. She’s a bit too aggressive and hard-headed to achieve much in the way of an audience rooting interest, but since the romance is handled so chastely anyway, it probably doesn’t matter. Don Knotts doesn’t get much help with memorable comedy material and must resort to his collections of mugs and grimaces he used to earn five Emmys for his television work (and since when do race drivers take their mechanics along in the car with them? None of the other drivers in the race are afforded that luxury. There is also a sloppy continuity problem with Wheely’s name appearing whole or only in part on his helmet as the movie transpires). In addition to the other supporting actors already mentioned (Jacques Marin, Xavier Saint Macary, Roy Kinnear, and Bernard Fox), Eric Braeden and Alan Caillou play Dean Jones’ chief rivals for the race, the German and French champions respectively, and they’re stereotypically brash and bullying in their underestimation of the Volkswagen to hold its own with their sleek supercars on the highway.

The film has been framed at 1.66:1 for this home video release, offered in 1080p resolution using the AVC codec. It’s a fresh and crisp transfer of the movie with outstanding sharpness (except in glamour close-ups of Julie Sommars) and bright, rich color throughout with vivid and appealing skin tones. Contrast has been consistently applied to make for a terrific picture. Black levels are also quite marvelous. The movie has been divided into 12 chapters.

The DTS-HD Master Audio 5.1 sound mix is underwhelming to say the least. The rear surrounds add almost nothing to the listening experience apart from some light spillover of Frank DeVol’s music from the front channels. There’s not much oomph to the atmospheric effects of the film either, and volume levels seem a bit on the light side and might require some user adjustment to get the most out of the audio encode. Dialogue has been nicely recorded and has been placed in the center channel.

There are no bonus materials present for this specialty Blu-ray disc.

Herbie Goes to Monte Carlo is a weak entry in the Love Bug series, but it’s certainly family friendly (that G rating is entirely earned), and the Blu-ray offers a bright, beautiful image for those interested. The high definition edition of the movie is presented as part of the Disney Movie Club (www.DisneyMovieClub.com) though you can certainly find it offered for sale with varying prices at Amazon (see below) and through other marketplace sellers.

This has always been my least favourite of the original series. Always left me cold. The holes in the storyline bug the hell out of me - it's like Michele Lee never existed!
E

Technically not 'Amazon''s price, but rather the marketplace sellers who are carrying the disc.

At least this is making its first home video appearance in something resembling the aspect ratio of its original theatrical engagements.


classicmovieguy said:
This has always been my least favourite of the original series. Always left me cold. The holes in the storyline bug the hell out of me - it's like Michele Lee never existed!
Click to expand...

That might not have been the case had the original screenwriters been available. Bill Walsh died in 1975 and Don DaGradi only wrote the first film; apparently he retired right after Bedknobs and Broomsticks.

Dean Jones and Michele Lee did reunite for Walt Disney World's 10th Anniversary Special where they play a husband and wife taking their blond children to WDW. And no, how two dark-haired parents could create two blond children is never explained.

MatthewA said:
And no, how two dark-haired parents could create two blond children is never explained.
Click to expand...

Unless the parents hair is jet black, it's totally reasonable. Both me and my mother's hair was blonde when we were kids. Now both really dark brown.

Yes my dad is borderline redhead and my mother was dark-haired; I was born blonde.

This is where the series ends for me. I still enjoy this for the return of Dean Jones and Don Knotts. The series was clearly running out of steam and the next entry is rock bottom spelling not only the end of the Herbie series but the long running series of Disney slapstick comedies that started In the late 50's.

They made a brief comeback on TV in the 1990s and early 2000s, but it just was not the same.
You must log in or register to reply here.