In just over a decade, the Walt Disney Company managed to squeeze every bit of creative juice out of its Love Bug franchise and left it a limp, pale shadow of what it had been originally. Herbie Goes Bananas is the fourth and last of the feature film sagas of the magical Volkswagen bug with a mind of its own, and the comedy set-ups and human interactions found in this lamentable comedy have never been shallower or more forgettable. 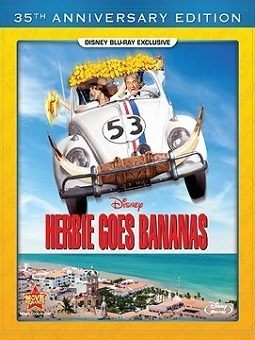 Arriving in Puerto Vallarta, Mexico, to pick up Herbie, the prize-winning racing Volkswagen, to run in the Brazil Grande Premio, racer Pete (Stephan W. Burns) and his mechanic D.J. (Charles Martin Smith) run into enterprising little pickpocket Paco (Joaquin Garay 3d) who has also just lifted the wallet of a mobster (Richard Jaeckel) who along with his confederates (John Vernon, Alex Rocco) has on a piece of film the location of a lost Incan city rumored to be loaded with gold artifacts. When both parties attempt to get their property back, the wallets get switched, and Herbie decides to hide Paco from the bad guys. On the boat to Brazil captained by the egotistical Captain Blythe (Harvey Korman), Herbie causes too much trouble and is tossed overboard, but not to fear. The little Bug makes it through the Panama Canal determined to keep Paco safe from the bad guys at all costs while the racers valiantly struggle to retrieve their race car.

It’s a very uninspired script Don Tait has written for this fourth Herbie adventure even if he’s made the trouble-prone Herbie endure events like walking the plank and playing matador in a bull ring (which goes on too long but contains the film’s best-staged sequence). There’s a predictable and completely uninteresting juvenile romance for Pete and a nerdy student Melissa (Elyssa Davalos) who, can you believe it, removes her oversized glasses and becomes gorgeous! It’s filled with slapstick, too, with the by now standard frosted layer cakes in the face and a climactic banana peel fumbling fiasco for the antagonists. There’s never very much a sense of danger for any of the heroes (the villains aren’t bright enough to manage to be sinister), but Paco never learns any lessons about his thievery or the consequences of his actions on the lives of many others. Director Vincent McEveety, much more well known for his work in television than in feature films, keeps things moving at a decent if somewhat lackadaisical pace and manages to present the south of the boarder locations with as much color and splendor as he can squeeze in between the mugging and vapid action of the piece.

Cloris Leachman receives top billing for the film, but apart from the money she has on hand to finance Herbie’s racing career, her role is rather insignificant, and the script saddles her with mooning after the cartoonishly awful Harvey Korman as the ship’s captain. Korman’s antics on TV variety shows are side-splitting and often brilliant, but Mel Brooks’ occasional use of him in his films has developed within him a lot of bad habits with mugging and putting on silly voices that run counter to what everyone else in the picture is doing. Charles Martin Smith is trying his hardest to develop a character with next-to-nothing to work with while the young juveniles Stephan W. Burns and Elyssa Davalos are bland and forgettable as young lovers. With Joaquin Garay 3d’s Paco the ostensible star of the movie, it’s clear the Disney folks were aiming this to be a kiddie comedy rather than something for the entire family as the first three Herbie films were intended. And it’s a crime what a waste it is to have fine actors like John Vernon, Alex Rocco, and especially Richard Jaeckel on hand and not give them anything of consequence to do. As is usual in a Disney film of this era, there are delightful glimpses of legendary character actors like Fritz Feld, Vito Scotti, and Iris Adrian in tiny parts doing their all to give the film a lift.

The film is presented in its theatrical 1.85:1 aspect ratio and is offered in 1080p resolution using the AVC codec. Sharpness is generally quite good though there are occasional soft shots for no legitimate reason. Color is for the most part strong and solid though Paco’s red ball cap does bloom a bit on occasion. Skin tones are true and appealing. Contrast has been consistently maintained throughout. The film has been divided into 12 chapters.

The DTS-HD Master Audio 5.1 sound mix is underwhelming to say the least. Dialogue seems rather quiet and laid back in the mix, and the Frank De Vol background score and the atmospheric effects never fill the soundstage but rather seem far more frontcentric with next-to-nothing sent to the rear channels. There are, however, no problems with age-related artifacts like hiss or crackle.

There are no bonus features at all on this Disney Movie Club exclusive Blu-ray release.

What a shame that Herbie the Love Bug’s last cinematic hurrah should be such an anemic one. Regardless, the movie is offered as part of the Disney Movie Club (www.DisneyMovieClub.com) though you can certainly find it offered for sale with varying prices at Amazon (see below) and through other marketplace sellers.

To say this is the worst of the 4 Herbie Movies would be an understatement. I like the other 3 quite a bit but have never been able to make it through this one.

This is why the studio gave up on live-action gimmick comedies until Honey, I Shrunk The Kids. But they weren't through with Herbie yet. They gave him a short-run TV show in 1982, a made-for-TV movie in 1997, and that Lindsay Lohan thing in 2005 (is that better or worse than this?).


And poor Alex Rocco (RIP): from The Godfather to this in just eight years. At least, like oh so many of Disney's featured players, he had TV to fall back on.* And fortunately for Charles Martin Smith, he'd have Never Cry Wolf to look forward to. Now where's that on Blu-ray?


*No, don't think I've forgotten about the actors playing Charlie Polniaczek and Beverly Ann Stickle were in the same movie before they ever got involved with The Facts of Life. That, in and of itself, does not make this a good film, but it does add a new link in the many connections between that show and The Mouse.

I think Herbie Fully Loaded is better than either Herbie 3 or 4. maybe close to 2, but it's hard for some folks to forget LL is on screen

Unnecessary since it really doesn't do anything new, but pretty harmless especially for kids.


I thought I remembered the reviews for Fully Loaded were decent when it came out, but pretty much all the review/opinions since Reality Show Lindsey seemed to have skewed her early work.

I don't even acknowledge the LL one exist so yeah its worse than goes Bananas but I don't care for any of the Disney remakes of their earlier live action films.
You must log in or register to reply here.