He Ran All the Way Blu-ray Review

He Ran All the Way is notable for being a fine example of 1950s film noir, and it also happens to be the final screen appearance by John Garfield. This Blu-ray disc from Kino Lorber is nearly flawless, and it is a welcome addition to the rapidly growing catalog of KL Studio Classics releases. 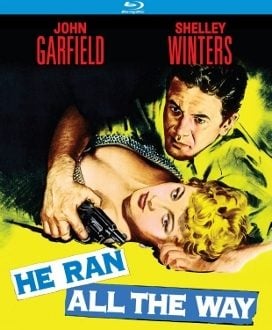 If you were a man you'd be out looking for a job. – Nick Robey’s Mother

Nick Robey (John Garfield) is a small-time, shiftless crook whose friend and partner in crime, Al Molin (Norman Lloyd), has plans to make a big score by robbing the railroad company's payroll. Nick is a nervous sort who tries to beg off by claiming that he doesn't feel well, but Al is determined to go through with it. He tells Nick to go home and get his gun. At the railroad depot garage Nick slugs the paymaster, who has just arrived with a suitcase full of cash. However, before they can get away a police officer enters the garage. The two thieves panic and run, with the officer in hot pursuit. Shots are fired and Al is hit, but Nick manages to get outside. When the policeman shoots at him Nick returns the fire, hitting the officer in the stomach.

Nick flees on foot and tries to blend in with a crowd. He walks up to an indoor public swimming pool and decides to hide out there. He locks the suitcase in a locker and he keeps to himself until a police officer shows up, apparently asking questions about the robbery. While swimming around to avoid being noticed Nick bumps into a young woman, Peggy Dobbs (Shelley Winters), who is a novice swimmer. Nick, who figures that the police are looking for a man who is by himself, is friendly towards Peggy and tries to make it appear that they are a couple. When the pool closes he realizes that there must be a dragnet out for him, so he waits outside until Peggy emerges and he convinces her to let him take her home. She is shy and lonely and obviously is flattered that Nick is paying attention to her.

Peggy lives in a walk-up apartment with her parents and younger brother. She introduces Nick to them, after which they leave to go to a movie. Nick then starts to act erratically. Peggy clearly is falling for him, but he is alternately tender and rough with her. He complains of not feeling well and takes a nap. After waking up he looks out a window and sees Peggy's parents and brother talking with two men out on the sidewalk. Nick mistakenly concludes that the men are police detectives. When Mr. and Mrs. Dobbs and the boy enter the apartment, Nick holds his gun on them and blurts out that he is the man who shot the police officer during the robbery. Nick has assumed that by now the police knew his identity, but Mr. Dobbs, who is a printer for the newspaper, tells him that the police still do not know that he was involved in the crime.

Nick's paranoia has left him in an impossible situation. He was planning to make a run for it before Peggy's parents came home, but now he fears that if he leaves they will call the police and identify him. The situation gets worse in the morning, when the newspaper reports that the wounded police officer died and that Al has fingered Nick as his accomplice. Now the police really are looking for him, and he is a cop killer. Nick cannot kill the entire Dobbs family, because they would be missed almost immediately, and he cannot keep them all hostage because Mr. Dobbs and Peggy have jobs and the boy has to go to school. If they fail to show up, someone is going to come looking for them.

Although the plot of He Ran All the Way has some similarities to the 1955 film The Desperate Hours, a major difference is that here the hostage taker has ambivalent feelings about his hostages. Nick clearly would like to get away without hurting anyone else, and we sense that in his own way he is as lonely as Peggy (his mother, brilliantly played by Selena Royle, refuses to help Nick after his involvement in the robbery becomes known). He would like to reciprocate Peggy's feeling for him, but that would involve trusting her and his paranoia does not allow Nick to trust anyone.

John Garfield, who is excellent as always, had been blacklisted in the spring of 1951 after he refused to name names before the House Un-American Activities Committee (HUAC), even though he was not himself a Communist. He had a fatal heart attack a year later at the age of 39. Shelley Winters, who made a career of playing loud, brassy women, is very believable as the needy Peggy.

The film's connection to the blacklist goes beyond Garfield. The screenplay is credited to Hugo Butler and Guy Endore, but for this film Endore was a front for the blacklisted Dalton Trumbo, who actually worked with Butler on the script. Subsequently Endore himself was blacklisted. Selena Royle also was blacklisted after she refused to testify before HUAC. She was reduced to appearing in the hilariously awful Robot Monster (1953), as well as a few television shows, before she and her husband left Hollywood and moved to Mexico.

He Ran All the Way moves along in a brisk 79 minutes under the able direction of John Berry, who also was blacklisted after being named a Communist by Edward Dmytryk. Unable to work in Hollywood, Berry moved to France and made several films there during the 1950s.

Although viewers might well be concerned after seeing a few seconds of projector wear at the end of the opening credits, it lasts for only a few seconds and subsequently the picture is exceptional. Black levels are fine, contrast is consistent and strong, gray scale is excellent, and the image is very sharp. An opening close-up of Nick sleeping reveals every pore on John Garfield's face. The credit for the atmospheric photography goes to the master cinematographer James Wong Howe. The 1080p transfer is delivered via the AVC codec with an aspect ratio of 1.33:1.

For another opinion about the high quality of this Blu-ray, please take a look at the comments by our resident expert, Robert A. Harris.

The mono soundtrack also is very good, with no distortion or age-related anomalies. The soundtrack delivers a surprising amount of punch, and the musical score by Franz Waxman sounds terrific.

The only extras on this Blu-ray disc are trailers for the feature and Witness to Murder. There also is an odd trailer for A Bullet for Joey - odd because it doesn't identify the film by name and it is framed at 1:78:1.

He Ran All the Way has historical significance as John Garfield's last film, but it also is an effective film noir with a beautifully ironic ending. MGM has provided Kino Lorber with an outstanding transfer, notwithstanding the brief video hiccup at the end of the opening credits.

He Ran All the Way has historical significance as John Garfield's last film, but it also is an effective film noir with a beautifully ironic ending. MGM has provided Kino Lorber with an outstanding transfer, notwithstanding the brief video hiccup at the end of the opening credits.

Thanks for the great review. One correction, this film was newly re-mastered by Kino Lorber. MGM provided us the film elements and we re-mastered it.

MisterLime said:
Thanks for the great review. One correction, this film was newly re-mastered by Kino Lorber. MGM provided us the film elements and we re-mastered it.
Click to expand...

Thanks for the correction.

Blu-ray.com says ˝...and the initial transition into the feature is marred by severe macroblocking...˝ . is that really macroblocking? what caused that macroblocking? Isnt ˝MB˝ caused by compression or bad encoding? -Anybody? I really want to know, Im trying to get to know as much as possible about these things...

I didn't notice it!
You must log in or register to reply here.