Hackers is probably better known for helping to launch the careers of Angelina Jolie and Jonny Lee Miller than for the movie itself. Released to theaters in 1995 by MGM, the film failed to connect (no pun intended) with audiences, grossing only $7 million at the box office versus its reported $20 million budget. With help from cable and DVD, the film gained cult status, and now Shout! Factory has released a 20th anniversary Blu-ray edition with improved video and a retrospective featurette. 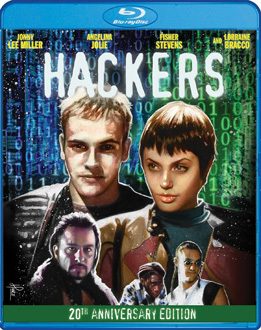 As Hackers opens, Dade, a young boy going by the code name of Zero Cool, is banned from using computers and touch-tone phones until the age of 18 while his parents are fined $45,000, his sentence for crashing over 1500 computer systems that resulted in a 7 point drop on the New York Stock Exchange. Seven years later, his mother, now divorced, moves to New York with Dade (Jonny Lee Miller), in hopes of finding a new life. But Dade is a hacker at heart, now going by the code name Crash Override, and one evening hacks into a local TV station, changing the late night programming from a talk show to an episode of The Outer Limits. Dade gets swiftly knocked offline when he is interrupted by another hacker, Acid Burn, warning him to stay out. Dade meets his match yet again when enrolling in high school, as Kate Libby (Angelina Jolie) plays a prank in telling Dade there is a pool on the roof of the school, and winds up locked out on the roof during a rainstorm. In computer class, Dade hacks into the school’s system to enroll in the same classes as Kate, and in doing so, meets fellow hacker Ramon (Renoly Santiago), code named The Phantom Phreak, who invites him to a hackers hangout called Cyberdella. It is here that Dade meets other hackers from school, including Emmanuel Goldstein aka Cereal Killer (Matthew Lillard), Paul Cook aka Lord Nikon (Laurence Mason), and aspiring hacker Joey Pardella (Jesse Bradford). Dade also encounters Kate, beating her high score in the video game Wipeout, learning that she is the notorious Acid Burn that booted him out of the TV station’s network. A rivalry quickly develops between Dade and Kate, with the other hackers as spectators and judges.

Meanwhile, Joey, trying to prove himself and earn a code name, hacks into Ellingson Mineral’s computer system, accessing a Gibson server and attempts to download a folder named Garbage. His mother disconnects Joey’s computer before he can complete the download (this is the era of dial-up), but not before the company's computer security officer, Eugene Belford aka The Plague (Fisher Stevens), can trace the call. The next morning, the Secret Service shows up at Joey’s apartment, led by agent Dick Gill (Wendell Pierce), and have him arrested. Belford uses this to his advantage, as he and Margo (Lorraine Bracco) have been embezzling funds from Ellingson Mineral, and plans to frame Joey and his hacker friends for the Da Vinci virus Belford has planted in the systems as a diversion, which will capsize several of the company’s oil tankers. Dade, Kate, and the rest of the team uncover the plot, and work together to turn the tables on Bedford.

Hackers was likely ahead of its time when it was released to theaters in 1995, as most people knew nothing about the internet or the hacker subculture and its potential threat to society. Viewed today, the technology in the film is extremely outdated (there is a scene where the hackers are quite literally drooling over a laptop with an active matrix display and 28.8 kbps modem). But director Iain Softley (K-Pax) does a much better job of making the technobabble and acts of hacking more visually interesting than what Michael Mann was able to do more recently in blackhat, even if it’s just swirling text and colors. Jonny Lee Miller and Angelina Jolie do have some chemistry as the leads in the film, and that helps immensely. That chemistry translated off screen as well, as they were married shortly after the film was released and eventually divorced. What is surprising is how MGM, a studio that is very focused on remakes and sequels, hasn’t rebooted Hackers yet, despite its cult status.

Hackers comes to Blu-ray in a nice 1080p transfer, compressed using the AVC codec that retains the film’s intended 2.35:1 aspect ratio. Colors are vibrant and natural, without appearing oversaturated. Detail is very good, although many of the optical effects sequences are, quite naturally, somewhat soft. Contrast is also excellent, with deep blacks with little to no evidence of crushing while retaining fine shadow detail. The print does exhibit some very minor accumulation of dirt, but these are mostly during opticals and are likely baked in.

The real head scratcher on this release is the lack of a 5.1 mix. Hackers was released theatrically in DTS 5.1 Digital Sound, and even the older DVD from MGM had a Dolby Digital 5.1 mix. For some reason, Shout! Factory’s 20th Anniversary Blu-ray Edition only contains a DTS-HD Master Audio 2.0 stereo surround track. It’s not a bad track, and for a matrixed surround mix, it sounds pretty darn good, with clear dialogue directed mostly to the center channel and music and effects spread across the front and rear soundstage. What it lacks is any discrete surround effects and a much deeper low end that a 5.1 mix could provide.

The Keyboard Cowboys: A Look Back At Hackers (1080p; 1:03:55): Director Iain Softley, hacking consultants Emmanuel Goldstein and Nicholas Jarecki, Peter Chiang (visual effects), actors Matthew Lillard, Fisher Stevens, and Penn Jillette, and various film critics discuss the making of the film, its reflection on the hacker subculture, and the reception the film has received.

Fans of the film will appreciate the documentary and the improved video transfer, and fans of the hit CBS series Elementary will likely get a kick out of seeing an early performance by Jonny Lee Miller in bleached blonde hair and an American accent. It’s a bit disappointing and odd that the only soundtrack option on the disc is in stereo and not the theatrical 5.1 mix.

Saw this first run. Third Blu-Ray I would liked to have picked up, but won't due

to sound track !. This week.