Grimm: Season Two works its magic to bring the second season of the NBC fantasy procedural to Blu-ray. The 5-disc collection presents all 22 episodes in pleasing high definition picture and sound, along with a small assortment of extras, including deleted scenes and an extended episode, with the final disc also including a pair of featurettes, a gag reel, a Grimm Guide and a few other odds and ends. The series has definitely improved with the second season, showing more assurance in the writing and enough extra funds in the CGI to make that element work more effectively this year. 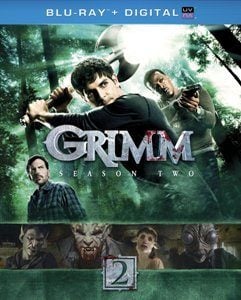 Grimm: Season Two showcases a fantasy series finding its voice and getting much more confident in its second season. The Portland-based series, as we discussed last year, is a mash-up of two genres that normally don’t go together. Partly, it’s a procedural where our heroes deal with the victim of the week to solve a crime (usually a grisly murder), and partly it’s a fantasy about how these crimes are being committed by creatures out of various fairy tales. The basis for the series is that detective Nick Burkhardt (David Giuntoli) is actually a “Grimm”, which is to say a person who has the ability to detect and fight these various fairy tale characters. The series normally revolves around the “Monster of the Week”, the details about which Nick normally gets from his creature friend Monroe (Silas Weir Mitchell), usually resulting in multiple opportunities for a CGI transformation or two and a fast-paced action sequence or three. There’s a droll sense of humor running through the series, but this is probably a big part of what distinguishes the show from earlier mash-ups like The X Files and Fringe.The second season of this series is a lot more assured than the creakier first season, indicating this show could well go on to at least another 2 or 3 years of creepy adventures in and around Portland. A big part of this has to do with the show’s development of a fairly intricate mythology – in the form of at least three or four major arcs that run through the season. Sometimes, one or more of the arcs takes center stage. At other times, like with The X Files, the arcs run quietly in the background while this week’s monster is dealt with. Past this improved quality in the storytelling, the show has also become much more proficient in the CGI facial transformations that are key to the series’ appeal. Either they’ve put more of a budget into the CGI or they’ve just gotten better at the shots. But the morphing work looks much better this year and the seams really don’t show like they did during the first season. I have to give these guys credit. I wasn’t sold on this series a year ago. This year, they’ve upped their game and made something I really can recommend to genre fans.The Blu-ray set includes all 22 episodes of the second season in 1080p HD picture and DTS-HD MA 5.1 sound, along with a small selection of extras, almost all of which can be found on the set’s final disc. I should note that the season was released on SD DVD as well. The Blu-ray set has two exclusives – the Grimm Guide to the various creatures introduced this season, and an extended version of the episode “Over My Dead Body” which runs nearly 15 minutes longer than the aired version..The home video release of this set came on September 17, in plenty of time for viewers to watch the episodes before the 3rd Season Premiere on October 25. One gets the idea that they might be timing the premiere to line up with Halloween for some reason…DISC BY DISC:As I regularly do with TV series sets, I will describe what can be found on each disc, in order. The deleted scenes are all presented in high definition picture (VC-1 encoding) and 2.0 sound.There are chapters to each episode, but they are not in any menu, so you wind up needing to jump through the episode blindly to get back to a specific point.DISC ONE:Episodes: Bad Teeth, with deleted scenes (1:19) – The premiere episode immediately pays off the reveal from the end of last season as Mary Elizabeth Mastrantonio’s character is injected into the continuity. Bigger pieces of mythology start running through the story, as more specific developments begin affecting all of the characters outside of the immediate monster. The episode also features a narrated title sequence that rather obviously describes the idea of the series.The Kiss, with deleted scenes (2:42) – The second episode pays off the premiere and lays a lot of groundwork for the story that will run for the rest of this season. This episode also features the narrated title sequence.Bad Moon Rising, with deleted scenes (0:57) – This is the final episode with the narrated title sequence.Quill – As of this episode, the title sequence plays without narration for the rest of the season.The Good Shepherd, with deleted scenes (1:46)Here Comes Treble, with deleted scenes (8:07)DISC TWO:Episodes:Over My Dead Body, televised version (running 43:28)Over My Dead Body, extended cut (running 55:58), with 2.0 sound rather than the 5.1 mix heard on the televised version – BLU-RAY EXCLUSIVEThe Bottle Imp, with deleted scenes (1:12)The Other Side, with deleted scenes (1:04)La LloronaDISC THREE:Episodes:The Hour of DeathTo Protect and Serve ManSeason of the Hexenbiest, with deleted scenes (8:02)Face Off, with deleted scenes (3:01)Natural Born WesenDISC FOUR:Episodes:Mr. SandmanNamelessOne Angry FuchsbauVolcanalis, with deleted scenes (2:49)Endangered, with deleted scenes (2:50)DISC FIVE:Episodes:Kiss of the Muse, with a deleted scene (1:17)The Waking Dead, with deleted scenes (5:55) – And here is where the endgame of the season gets going. I would recommend watching at least this episode before getting into the season finale…Goodnight, Sweet Grimm with deleted scenes (5:29) – The season finale not only pays off several story points that have been building throughout the season, but sets up some interesting, shall we say, “issues” for the characters to deal with in the upcoming 3rd season.

Grimm: Season Two is presented in a 1080p transfer that shows off a clear picture and accurate flesh tones, as well as solid black levels. As we discussed last year, the black levels are almost crucial on a series like this, since much of takes place at night or in the dark. One oddity here is that the picture has VC-1 encoding for discs 1, 2 and 4, but AVC for discs 3 and 5.

Grimm: Season Two is presented in an English DTS-HD Master Audio 5.1 mix (at an average 4.0 mbps) that provides plenty of atmospherics and music throughout the channels. As one would expect from a genre series, the home theater gets a healthy workout from playing these discs. Beware playing episodes at loud volume late at night…

As noted above, all of the discs contain deleted scenes from various episodes. These scenes can be accessed individually per episode or via a "Play All" option for the scenes on each disc.In addition, Disc 5 also contains:Gag Reel (5:11, 1080p) – About 5 minutes of blown takes and gags are included here, as part of the regular assembly included on the season sets.Grimm: Myths, Monsters and Legends (10:23, 1080p) – This is actually a quick look back at the story arcs of the second season, with the cast and producers chiming in about the various changes that happen this year.Grimm: Creatures and Chaos (2:59, 1080p) – This is a compilation of the various CGI face-morphs seen during this season. A similar compilation was included last time around with a different name.Bad Hair Day Webisodes (8:39 Total, 1080p) – This is a collection of the four webisodes posted on the NBC website in early 2013. These are quick scenes involving Monroe (Silas Weir Mitchell) and Rosalee (Bree Turner). The webisodes are, in order: “A Sore Subject”, “A Helping Hand”, “Friendly Neighborhood Eisbiber” and “Late Night Crisis”.Monroe’s Best Moments (2:18, 1080p) – This is really just a quick compilation of one-liners and takes from Monroe.Grimm Guide – (BLU-RAY EXCLUSIVE) – Just as was done with the Season One set, the new Blu-ray includes an interactive glossary of the various creatures introduced this season. Clicking on a name on the list will bring up a screen containing a summary of that creature’s attributes and a relevant clip of the creature from the episode where it appears.Ultraviolet – An insert in the packaging offers an authorization code for downloading and streaming Ultraviolet copies of the episodes. Collector Cards – Also included in the packaging are a pair of collector cards featuring creatures seen on the series this year.

Grimm: Season Two is a good collection of the second season of the fantasy series. Again, this show has improved a good bit from its beginnings last year. There’s a much stronger story backbone and the CGI looks better. Fantasy fans should enjoy the fine presentation of the picture and sound, as well as the extra features included in the package. And there’s still time to pick up this set and get through the episodes before the new season starts on the 25th.