Greetings and an intro of sorts (1 Viewer)

I'm James and I found your site through Dave's use of one of the addons myself and a friend put out for the xenforo community. Glad to be here, great site.

Any wrestling fans here? Audiophiles? If so I might have a treat for you.

I do digital audio and have been an audio production guy for over 40 years. Over the weekend I got inspired by of all things, an arena anthem that's a pro wrestling entrance. A group posted the arena audience singing which was during the last wrestling PPV before covid and I took their vocals and cleaned them up and isolated them, got them on tempo then combined them with the studio version of the song which I also, sweetened up a bit first.


Here's the live arena singing it before even the music starts:

Please take a listen and let me know what you think!
Last edited: Jan 1, 2021

Nice work Max. I used to fiddle quite a bit with Fruityloops (now FL Studio) making trance music mixes, but am way out of practice.

Dave Upton said:
Nice work Max. I used to fiddle quite a bit with Fruityloops (now FL Studio) making trance music mixes, but am way out of practice.
Click to expand...

It's a discipline, the equipment available today is much better even than what I use. But even that sure beats the old way, working with audio tape! Probably couldn't even do this, back then. Would have been horrendous to try and impossible to get this tight and clean of an end product. I have this encoded to work well with home theater systems by the way. You get the full effect.

Back when DAT first came out I thought we were moving in a positive direction, but then full blown digital audio hit and I've never looked back. I have tons of stuff I've done, at least two TB of files, it's something that when I get inspired I'm not above spending hours on. Here's my youtube page, some of my work is posted there. I play around with video a little bit too but nothing to talk about. Mainly use something visual just to post the audio on YT. I'll probably make a video for this latest effort as well.

Thanks for the welcome, Dave.

I think you did a fantastic job with it.

Ozzy47 said:
I think you did a fantastic job with it.
Click to expand...

'Preciate the flowers! Had no idea you would even see this much less dig it. I think we talked about wrestling a few weeks ago and I was trying to get you back into it. Tribute show for the late Brodie Lee is on TNT tomorrow night. Must see TV.

When I started this audio project it was Saturday afternoon and I happened to check news online and saw the breaking story that Brodie has suddenly passed and it tore my heart out. I never was a major fan of him but then again he was at WWE which is 98 percent garbage at all times, so really never saw him much.

He comes to AEW where they allow the performers to craft their own gimmick and support them in every way in the story telling and product, and he flourishes and was really coming into his own both creatively and his in-ring performance. As a heel Brute and cult leader type he was getting up there with the greats of the business in that regard. Channeling Bruiser Brody with a touch of Charles Manson, he was oozing intimidation and brutality but mixing it with his fantastic agility and athleticism. And was fun to watch.

Right at the pinnacle of his craft he worked so hard at, he gets sick and dies. Right when everything he deserved was coming his way, his number gets called. It's a gut punch because I was really coming to admire him and his work.

I was going to just scrap this audio project and maybe look at it another time, but I had been planning it in my mind for weeks and then realized that in wrestling, the show goes on regardless. So with quite heavy heart I started work on this and didn't stop until it was finished.

Here's a screengrab of the audio workstation. This was about 8 hours work total. 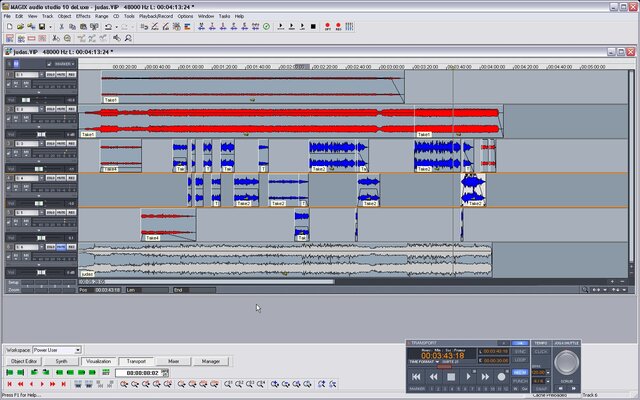 Glad you took the time to listen to the source material and then the final product, allowing you to understand what this is.

I put it out on video tonight. Subtitles explain it.

Tagging in a few members who follow wrestling. This is really cool - but the amateur audio engineer in me cringes at how much effort it must have taken to do all the syncing work.

Dave Upton said:
This is really cool - but the amateur audio engineer in me cringes at how much effort it must have taken to do all the syncing work.
Click to expand...

Thanks Dave. I feel like I really brought the thunder with this one. The breakthrough was, after I downloaded the audio containing all the arena singing and choir voices, I applied the karaoke plugin to them - which is usually used to get rid of vocals. But what it did here was get rid of all the extraneous noise like bleacher rumble, chatter, and the pyro explosions, and so on. Really cleaned up the singing and from that point it was pretty easy to sync them together and with the song itself, getting everything on the same tempo using time stretching/compression where needed. From there it was just a matter of working with sound levels in the mix. But yeah, this was hours. At least 8 hours total plus now a couple of extra hours cobbling together the video for it. Glad someone appreciates it.
You must log in or register to reply here.