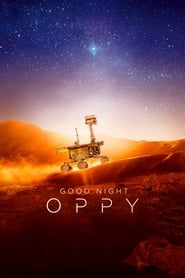 
Tagline: A 90-day mission becomes a 15-year journey of opportunity.

Plot: The inspirational true story of Opportunity, a rover that was sent to Mars for a 90-day mission but ended up surviving for 15 years. Follow Opportunity’s groundbreaking journey on Mars and the remarkable bond forged between a robot and her humans millions of miles away.
One of NASA's greatest achievements was the Mars Exploration Rovers mission that began in 2003 and continued long passed its planned obsolescence. Director Ryan White does a good job capturing the scope of the mission in GOOD NIGHT OPPY. The key element here is that NASA sent up twin rovers in 2003 that landed in different regions of the red planet. Dubbed Spirit and Opportunity, the rovers landed in 2004 and each began to drive and explore. Each craft was designed to last 90 days - they end up remaining functional for 22 YEARS combined! Opportunity ceased communication with earth in 2018 - some 16 years.

Director White gives the basic contours of the mission from inception to landing to the many Martian miles traversed. Angela Bassett provides narration, but, it is never overbearing. The real focus is on the scientists and engineers who planned and operated the twin spaceships. The mission lasted so long, that there was a large turnover in the staff over the years. Perhaps the most remarkable story is of Abigail Fraeman who was invited to Mission Control as a 16 year old student. She would complete school and eventually work on the mission itself.

White does try a bit too hard to anthropomorphize the rovers (to be fair, some of the mission specialists do as well). Sometimes, the Documentary also loses some drama by tying the two separate crafts together at crucial times such as the landings (they were weeks apart). It does maintain interest considering the length of the overall mission -- Opportunity lasted, 16 years after all. The highlight is a selfie the rover took to commemorate its 5,000th Martian day on the planet - perhaps, the greatest selfie ever taken. When mission control say's goodbye to 'Oppy' for the last time, it may not feel like a person's passing, but, certainly the equivalent of a beloved pet. But, Spirit and Opportunity, were much more than that - they were true explorers.

I was going to ask how we can watch this but clicking on the picture reveals it’s available now on Amazon Prime.
J

Tino said:
I was going to ask how we can watch this but clicking on the picture reveals it’s available now on Amazon Prime.
Click to expand...

Yes, it's also in the prefix to my post!

Duh. Missed that.
Movie information in first post provided by The Movie Database
You must log in or register to reply here.

2022 Track the TV Episodes You Watched