Largely flying under the radar, Good Kill is a thoughtful drama from director Andrew Niccol, writer and director of Gattaca, Lord of War and In Time, exploring the gray, ambiguous state that exists between what is right and wrong in the U.S. use of drone warfare. Drone surveillance and strike sequences are handled with expertise, creating an intense atmosphere, almost claustrophobic as the men and women of the Armed Forces, piloting these drones and supporting the missions are packed tight in independent operations rooms, containers almost, lined up on base. Niccol then explores the emotionally challenging dichotomy of taking part in a foreign war while on US soil, and the effects upon even the most seasoned of military personnel.

Check out my exclusive interview with director Andrew Niccol. 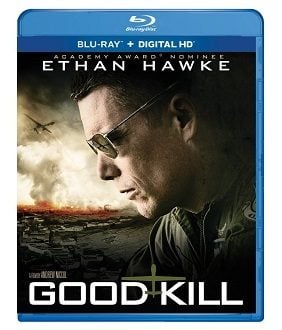 In the unforgiving deserts on the outskirts of Las Vegas sits an unassuming air force base where Major Thomas Egan (Ethan Hawke) is stationed as a drone pilot. For 12 hours a day he pilots an unmanned aerial vehicle over Afghanistan, monitoring and tracking the movements of the Taliban, and when required, executing targeted strikes against compounds, city buildings, and even moving trucks, under the leadership of his commanding officer, Lt. Colonel Jack Johns (Bruce Greenwood). Egan is frustrated. The skills at remote piloting drones is needed far more than a pilot in the cockpit of a plane, where Egan is desperate to return. Day after day, unable to fly a real aircraft, with the strain of delivering strikes and assessing of damage (counting the dead) mounting, Egan begins to whither. When the missions seem based on less certain intelligence increase, the pressure and doubts mount. When his days are over, Egan drives home to his wife (January Jones) and family. Unable or unwilling to talk about the pressures and mission trauma, he crushes inward.

Director Andrew Niccol’s Good Kill is a focused examination of the moral implications of using remotely pilot attack drones on the battlefield. Through a tight script, Niccol weighs the traditional parameters of war against a curious policy allowing non-military entities to dictate battle practices. In other words, authority of the CIA to take advantage of the military group commanding drones in war zones (using their own guarded intelligence to order kills). Niccol, directing from his own script, allows examination of that debate to play out behind the central emphasis on one man, Major Egan, and his struggles under the weight of conducting war from the relative comfort of his home town then driving home to his wife and family.

Bearing the weight of that focus is Ethan Hawke as Major Egan, giving his most understated performance yet. The burden of doubt, the sting of career disappointment, and the challenge of coping with his trials slowly escalates to a boiling point – and through this, Hawke is believable, sympathetic, and consistently excellent. A likeable and talented actor, Hawke has shown since his first two feature starring roles, first in the adventurous Explorers, then Peter Weir’s sublime Dead Poet’s Society, that he can take on interesting and challenging roles. His recent turn in Boyhood and the unsung Predestination prove that his instincts in finding roles that allow him to stretch his performance are on point. Hawke shares the screen with a splendid supporting cast that includes January Jones, Bruce Greenwood, and Zoë Kravitz as the optimistic Airman Vera Suarez.

Good Kill is potent drama. It simmers and unfolds with patience as Niccol’s script focuses on the effects of foreign warfare managed from home. Niccol’s uses Bruce Greenwood’s commanding officer character to distill the arguments over drone warfare succinctly, allowing him to discuss the dangers of this approach while defending its use, and debate the gains with enough doubt and dismay. A critical character in the film portrayed flawlessly by Greenwood.

Where Good Kill struggles is in the precarious balance of ideas and opinions that form the edges of the debate. While Greenwood’s character can serve proxy for the audience, able to exist on both sides of the argument and understand the importance and perils of using drones to strike targets, is a smart choice, there are limits. The question of the reliability of intelligence is nothing new in war. The risks of unintended consequences versus the consequences of not acting, will always be a factor in conflict. But how Good Kill shows the CIA ‘calling the shots,’ something worthy of discussion, seems too shallow. Overall, Good Kill elevates the broader discussion of drone warfare, but doesn’t seem to ask enough questions on the value or purpose of CIA intelligence and involvement.

The film resonates with the most power examining a war conducted from home. With a base set up in the deserts of Nevada, outside Las Vegas (because is resembles the terrain of the Afghanistan battlefield), drone pilots, their commanders and mission support staff, clock in for a day’s work and go to war. Spending their long days conducting surveillance missions, watching over American troops on the ground, and executing on strikes when required, before clocking out and going home for dinner with their families, is a stress unique to the most recent war.

Good Kill demonstrates the complexity of this new theater of war. Highlighting the stresses on American pilots as they watching from near-invisible drones and conduct targeted strikes, Good Kill shows a side of the last war we have not seen examined in film, and raises important questions that exist in the gray, ambiguous state that exists between what is right and wrong.

Shot using the Arri Alexa XT, with rich, involving cinematography by Amir Mokri, Good Kill’s arrival on Blu-ray shows off a fine palette of rich colors contrasted with the bleak, sandy landscapes around the base an in the war zone through the cameras on the drones. Finely executed aerial photography over the sandy war zones (and cleverly paralleled with aerial shots over Las Vegas) show off superb detail. Framed at 2.39:1, flesh tones are natural, brighter, warmer colors positively pop (green grass, Las Vegas lights at night) and there are zero issues with which to be concerned. Flawless.

As is common in Andrew Niccol films, the sound of the film supports a mood rather than punctuates scenes. Supplying the emotional mood for the soundtrack is composer Christophe Franke, underscoring the drone flight sequences electronically with remarkable subtlety and judiciously using strings to support, not overwhelm, moments of emotion. The 5.1 DTS-HD Master Audio helps create a confining feeling during the drone sequences, and intimacy during the majority dialogue-heavy scenes.

A single special feature accompanies this release. A short look at the making of the film

Good Kill: Behind the Scenes.

War will always be complicated. Today’s enemies around the globe, and the nature of the tools and intelligence at the disposal of those fighting those enemies, have revealed even greater complications. Good Kill asks questions about those new complexities, presents the sides of the debate – in particular the CIA’s role in facilitating strikes – but does not make the mistake of presumptuously answering those questions. Nor should it. The best films from the best filmmakers will examine an issue but not make the mistake of answering the most complex of issues.