Once the critical and popular darling of the American airwaves with millions of iTunes downloads, Emmy Award and Golden Globe wins, a cherished Peabody Award, and Program of the Year honors from the Television Critics’ Association, Glee came to the end of its six-year road with a whimper instead of a bang. With the concentration purely on staging elaborate production numbers and its usual dazzling musical sequences with storytelling mostly a mere formality, the final season of Glee was shuffled off into a Friday night timeslot with only a pittance of the audiences it used to command leaving the air almost as quietly as its premiere had been boisterous and mind-blowing. 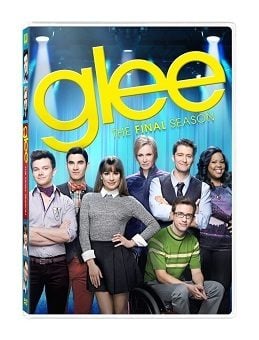 Since focusing on the original glee club members in New York had proved so unappealing to audiences in the previous season, the creators of the show maneuvered the original cast back to Lima for the final thirteen episodes of the series, a situation no matter how well explained couldn’t help but feel shamefully contrived and other-worldly. Because she had left her hit musical revival of Funny Girl for the lead in a live television comedy series which lasted one episode before being canceled, Rachel Berry (Lea Michele) returns home humbled and devastated by her failure. The remainder of the season, no matter how many other subplots the writers manage to concoct, basically revolves around friends, family, and new glee students shaking Rachel out of her doldrums, getting her back on her feet with confidence restored and ready to return to her first love, Broadway. Helping out is best friend Kurt Hummel (Chris Colfer) on a work-study program with his arts college NYADA who along with Rachel now resuscitates the New Directions glee club after it had been completely obliterated by McKinley High School principal Sue Sylvester (Jane Lynch). Former glee advisor Will Schuster (Matthew Morrison) has signed on to direct cutthroat rival glee club Vocal Adrenaline while Kurt’s ex-fiancé Blaine Anderson (Darren Criss) has dropped out of NYADA after his breakup with Kurt and returned to direct the glee club of his old school Dalton Academy. So with the principals all back in Lima within spitting distance of each other, there is plenty of time to mount musical numbers among themselves, their old or new groups, and with the new students who now make up the New Directions.

And the new students are the best reason for tuning into this final season of Glee. Rather than making the mistake the producers made in previous seasons with earlier replacements for the original group resembling in voice and demeanor the original glee members (the new Rachel, the new Finn, the new Puck), these new students are completely unlike any of previous members of the club. All of these new additions offer strong voices and tons of personality; a shame that with all of the other tying up of storylines from previous seasons, they only get occasional moments to shine. Samantha Marie Ware’s Jane Hayward, Noah Guthrie’s Roderick Meeks, Marshall Williams’ Spencer Porter, Billy Lewis Jr. and Laura Dreyfuss as twins Mason and Madison McCarthy, and late in the season tiny JJ Totah as Myron Muskovitz are all sensational in solo and group numbers as the production goes through its usual selection of pop, jazz, rock, rap, and show music standards with the expected theme shows, this year for Carole King and Alanis Morissette and later for Burt Bacharach. With just these thirteen episodes and with the writers unsure when Fox was going to schedule them, there are no holiday-themed shows as in past years nor does the new squad get the usual three big performance programs as in past seasons, the Sectionals competition being all the program has time for this year. There is, however, plenty of time for guest stars old and new with visits from Jim Rash, Brian Stokes Mitchell, Geraldo Rivera, Harry Hamlin, Jennifer Coolidge, Alex Newall, Gina Gershon, Ken Jeong, Carol Burnett, and Jonathan Groff.

That doesn’t mean the show doesn’t try for something fan-appropriate occasionally. There is a double wedding this year during one of the episodes (but it can’t compare to the Burt-Carol union in season two), a character does a surprising but too-rushed transgender realignment, and the final two episodes take an unusual course in showing us heretofore untold stories of the original group from 2009 (using a mixture of old show clips and newly shot footage) and then wrapping things up with the series finale which jumps ahead five years in the lives of many (but not all) of the principals showing the futures achieved through all of this singing. (Sue’s future life, however comic the writers meant it to be, is completely unearned.) But so much of the season offers a deja-vu feeling from past seasons: Sue’s neo-Nazi treatment of everyone and unending vilification of Will Schuster and the glee club (with yet another win-or-die ultimatum hanging over everyone’s heads), Becky Jackson’s (Lauren Potter) relentless tirades against one and all, the spiteful arrogance and maliciousness of Vocal Adrenaline, individual members fighting for solos. There are some musical highlights this year: Lea Michele’s rendition of the Oscar-winning “Let It Go!” and later her Broadway audition with “Promises, Promises,” Chris Colfer and Darren Criss’ “It’s Too Late," Alex Newall’s roof-raising “I Know Where I’m Going,” Colfer and Michele’s second Wicked song together “Popular,” and Michele’s climactic “This Time” penned by long-time co-star Darren Criss.

Here are the thirteen episodes contained on four DVDs in the case:

After being spoiled for four seasons on Blu-ray with video quality that surpassed the broadcast quality of the show, these 1.78:1 standard definition DVD transfers (anamorphically enhanced for widescreen televisions) aren’t bad, but certainly a letdown in terms of sharpness and detail. Color is generally very good, and flesh tones appear natural. Black levels are good though contrast sometimes seems irregularly applied. Each episode has been divided into 12 chapters.

The Dolby Digital 5.1 sound mix is pretty much identical to the quality of the broadcast versions with excellent fidelity through the soundstage during the musical sequences. Dialogue is also well recorded and has been placed in the center channel along with the singing voices. There is only occasional use of the surrounds for ambient effects, but the music spread is a great compensation.

Glee Musical Jukebox: Each of the four discs contains an opportunity to go straight to the musical numbers in each episode. Though once again Fox did not include a booklet inside the case to detail which numbers are present and who’s doing the singing in each episode, this feature does offer a list of songs for each episode.

Glee: The Final Curtain (11:21): co-creators Ian Brennan and Brad Falchuk along with many members of the cast recall highlights from this last season.

Looking Back Video Yearbook (23:31): cast and crew look back over the six years of the show’s production with many behind-the-scenes views of backstage camaraderie, clips from various episodes, and recollections of favorite songs and storylines from the many memorable years on the air.

For fans who have stuck through the many ups and (most recently) downs of Glee over its six years on the air, the sixth year of the show is certainly no worse than the previous two seasons, and in many ways it offers some excellent compensations with talented new cast members, outstanding production numbers, and fewer annoying episodes. While it’s a pity Fox isn’t offering the show once again on Blu-ray, the DVDs offer reasonable quality in picture and sound.

This Time was written by Darren Criss (Blaine), not Jonathan Groff. Darren also wrote the song "Rise" from The Rise and Fall of Sue Sylvester.

You're so right, and he even talks about writing it in one of the featurettes. I'll change the review to reflect that. Thanks so much.
You must log in or register to reply here.