When Fox's Glee came to the end of its fourth season, there was some speculation that this might be the end of the road for the formerly celebrated series. Ratings were down, and the show had lost both its critical and popular buzz. So, quite a few eyebrows were raised when Fox not only renewed the series but renewed it for two additional seasons. The plan seemed to be that the first half of the season would wrap things up with the high schoolers in Lima and then the show would reboot with many of its original stars plus a few new additions to take place solely in New York City to finish out its run. That's exactly what takes place in season five of Glee, but the storylines continued their erratic, dyspeptic decline, and the ratings continued to subside bringing about a shortening of season five by two episodes and making its contracted sixth season swan song one of only thirteen episodes. What had once been the talk of the town was now hardly an afterthought. 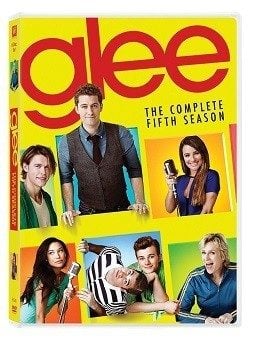 With the shocking death of cast member Cory Monteith weeks before the start of production for season five, the writers had a titanic task of coming up with new and different story arcs for characters who were to have been involved with Monteith’s Finn Hudson. The show did a tribute episode to him (“The Quarterback”), and he’s referenced constantly throughout the season both in the Lima and New York storylines, but sadly the jiggering of already planned stories didn’t really result in anything monumentally wonderful during the season. The Lima stories for the new members of the club continued to recycle plots from previous seasons (the continuing stream of mean girls including new head cheerleader Bree - Erinn Westbrook, bullying, pregnancy scares, jockeying for solos and for prom recognition, Sue Sylvester’s continuing war against the glee club with the usual ultimatum: win the national championship or the club will be terminated). Once nationals and graduation are over (which coincided with episodes 100 and 101 allowing many former cast members to return and relive some of the show’s most familiar songs in fresh arrangements), the show switched completely to New York to pursue the new and continuing storylines for those characters: Rachel (Lea Michele) landing the lead in the revival of Funny Girl with all of the resultant pressures and traumas, Kurt (Chris Colfer) beginning his own band (which allowed guest stars Demi Lovato and especially Adam Lambert to raise the roof in a couple of episodes), Artie (Kevin McHale) attending film school, Blaine (Darren Criss) adjusting to a new life in the Big Apple but coming under the sponsorship of a city diva (Shirley MacLaine) who has plans for showcasing his talents, Sam (Chord Overstreet) ready to become the next hot male model, and Mercedes (Amber Riley) who’s transferred from Los Angeles to New York to complete her first album. Sadly, though, the potential for fresh and exciting stories with a new locale and new possibilities for interaction with people other than their high school friends pretty much fades away, and we’re instead constantly disappointed by continual squabbling and making up between the various friends and unimaginative plots involving hate crimes, sexually transmitted diseases, and sexual abstinence. In addition to Lambert, Lovato, and MacLaine, the season offers some bracing guest star turns for returning stars Kristin Chenoweth and Gwyneth Paltrow as well as Jim Rash, Eric Roberts, June Squibb, Billy Dee Williams, and Tim Conway.

As has been the case in all of the seasons, however, where the show hasn’t let down is in its musical sequences. Yes, we get the requisite tribute shows again this year: the opening two shows of the season offering a Beatles tribute (featuring an exquisite rendering of “Yesterday” by Lea Michele and an uncanny facsimile of the Fab Four by Blaine, Sam, Jake (the wonderful Jacob Artist, by far the best of the added new glee members from the previous season), and Ryder (Blake Jenner) doing “I Saw Her Standing There”) as well as tribute shows to Lady Gaga, Katy Perry, and Billy Joel. Among the other really impressive numbers sprinkled through the season were the cast singing a gorgeous “Seasons of Love” and Amber Riley doing a poignant “I’ll Stand by You” during the Finn tribute episode, Adam Lambert tearing the joint apart with “I’m Gonna Marry the Night” and pairing with Chris Colfer on “I Believe in a Thing Called Love,” Darren Criss’ charming puppet-based “You’re My Best Friend” as he imagines the glee club as Muppets, Chris and Amber dueting sensationally on “I Am Changing,” and two Petula Clark songs that get the New York-based episodes off to a flying start “Downtown” and “Don’t Sleep in the Subway.” When (ridiculously and unbelievably) Santana Lopez (Naya Rivera) is made Rachel’s understudy at Funny Girl, it’s because of a roof raising audition of “Don’t Rain on My Parade” that she offers (even though the original keys have been substantially lowered to accommodate her range thus losing some of the thrill of the song), guest star Ioan Gruffudd playing Nick Arnstein joins with Lea Michele in “You Are Woman/I Am Man,” and Lea herself sings the show’s poignant “Who Are You Now?” (though it’s not, as erroneously stated in the episode, the last song in the show).

Here are the twenty episodes contained on six DVDs in this fifth season set:

After being spoiled for four seasons on Blu-ray with video quality that surpassed the broadcast quality of the show, these 1.78:1 standard definition DVD transfers (anamorphically enhanced for widescreen televisions) aren’t bad, but certainly a letdown in terms of sharpness and detail. Color is generally very good, and flesh tones appear natural. Black levels are good though contrast sometimes seems irregularly applied. Each episode has been divided into 12 chapters.

The Dolby Digital 5.1 sound mix is pretty much identical to the quality of the broadcast versions with excellent fidelity through the soundstage during the musical sequences. Dialogue is also well recorded and has been placed in the center channel along with the singing voices. The sound mix doesn’t quite capture the ambience of New York during the scenes shot on location nor is there much surround activity in settings like the Spotlight Diner (where the New York-based gang work and perform many of their musical sequences).

Glee Musical Jukebox: Each of the six discs contains an opportunity to go straight to the musical numbers in each episode. Though once again Fox did not include a booklet inside the case to detail which numbers are present and who’s doing the singing in each episode, this feature does offer a list of songs for each episode.

Gleeful: Celebrating 100 Episodes of Glee (8:31) Matthew Morrison (Will Shuester) and other cast members reminisce about the making of the 100th episode commenting on the songs the fans voted that they wanted the cast to perform again.

Glee in the City (13:34): producer/director Ian Brennan. Kevin McHale, Darren Criss, Amber Riley, Chris Colfer, Chord Overstreet, Adam Lambert, and Lea Michele discuss the exciting new directions of the New York-set Glee and the thrill of filming some of it on location in New York City.

Promo Trailers: Fox-produced dramas, New Girl, Beyond the Lights, The Fault in Our Stars.

As Glee staggers to its sixth and last season, there’s a bit of sadness watching season five that so much potential has not been exploited dramatically with the poor, predictable writing making character behaviors and actions ever more ridiculous and unbelievably otherworldly. The production numbers maintain their superior quality in the choice and execution of material, but the narrative structures that tie these songs and dances together are often unbearably arch and off-putting.

Heard this did get released on Blu-Ray in Japan- I have the first 4 seasons on Blu-Ray but haven't gotten through all of them yet, will order the Blu from Japan rather than settle for lousy standard DVD.
You must log in or register to reply here.