It’s back to the Delos Resort in the sequel to the popular sci-fi film Westworld, but sadly this second journey fails to generate the same cinematic thrills and excitement, much less fond memories. The movie’s debut on Blu-ray is similarly lackluster, no thanks to its frequently soft picture quality and slim collection of bonus material. 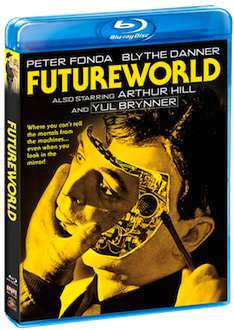 It’s been two years since androids populating the Delos fantasy resort went haywire and killed over 50 of its guests. Looking to recover from the disaster, the company has retooled the entire operation and promises guests can freely visit its medieval, Roman and future-themed environments without any fear for their lives. To get the word out about the new and improved experience (which naturally still includes killing and/or having sex with robots), the resort invites newspaper man Chuck Browning (Peter Fonda) and TV reporter Tracy Ballard (Blythe Danner) to the facility, giving them a chance to see the delights of Delos firsthand, as well as get a glimpse behind the scenes. As the pair embarks on its adventure in Futureworld, things do appear markedly improved, but Browning also has a tip that Delos may be hiding something sinister behind the welcoming demeanor. As the two reporters begin snooping around, they uncover information suggesting things are much worse than just androids getting their wires crossed.If the producers behind Futureworld wanted the same success as Westworld, the Michael Crichton written-and-directed sci-fi flick that gave Yul Brynner a whole other level of menace, they should have looked to replicate its predecessor’s confidence in storytelling. Instead, the sequel comes off as unsure of itself as it draws on various influences, namely The Manchurian Candidate, The Invasion of the Body Snatchers, and of course Westworld itself. Though the film does take a more lighthearted approach, the strategy also forges a double-edged sword that minimizes scrutiny of the story and characters, but then makes the film easy to write off as just plain dumb. No offense to TV shows The Six Million Dollar Man or The Bionic Woman, but I couldn’t help thinking the plot would have worked just fine for one of their episodes (or even one of their team-up, made-for-TV movies). At least in the World of Bionics we’d have an epic cyborg vs. android smackdown to look forward to.

Framed at 1.85:1, the 1080p, AVC-encoded transfer features all-around solid black levels, contrast and color depth. Sharpness, however, is another thing, as the first half of the film looks notably soft and indistinct regardless of close up or establishing shot. For whatever reason, things noticeably improve in the movie’s second half, but even then it has more than its fair share of slightly fuzzy images. Flecks of dirt are also sprinkled throughout the film, though the variable sharpness is ultimately the transfer’s greatest offender.

Dialogue in the English language 2.0 DTS-HD Master Audio track is consistently crisp, detailed, and intelligible. Surround activity is practically non-existent, as is LFE, but it’s a more than serviceable track with a decently wide sound stage.

Shout! Factory delivers a middling high definition presentation for Westworld’s similarly lackluster sequel, Futureworld. The special features, made up entirely of archival promotional materials, offers a glimpse at the film’s original marketing campaign, but overall it makes for a rather mediocre release for a hard-to-recommend film.

I enjoyed this, mostly because I was a kid when I saw it in the theater. The blu-ray is cheap, and I don't own the DVD, so this is a bit of a no-brainer for me.

Terrible movie. Watched on cable in HD. Few months ago and was reminded of how bad it was.
G

In my mind I had this confused with a movie I can't remember the name of. It's in a space station and one of the early scenes is someone floating in space and then getting sliced up by some kind of netting or wires.

WESTWORLD is one of my all-time favorite movies, but FUTUREWORLD was a real misfire, a dull and TV-like affair. Blythe Danner and Peter Fonda are extremely ineffective leads. The return of Yul Brynner's gunslinger robot here has got to be the most pathetic excuse for a return cameo EVER.

That said, I do own the R2 DVD anyway, and was thinking of an excuse NOT to "upgrade" to the Blu-ray when I didn't really like the movie all that much. I thank you for saving me the concern with your less than inspiring review of such a mediocre release!

Yep, I reviewed the MGM MOD release of Futureworld, and it was as lackluster as this release seems to be (only in DVD terms, of course).

And here it is!

A bit of personal history here.

My father was an assistant director on Futureworld. My earliest memory of visiting a movie set was the day that they shot the Chess Game. It was set up on a soundstage where the board was life size and set up in the middle of the stage floor. The camera was way up on a crane so they could get the overhead view from where the players would be. While we were there, they got the shots of the knight on horseback moving from one position to another. (And regularly someone had to clean up after the horse!)

The thing with the Blu-ray, which I was happy to pick up for nostalgia's sake, is that the picture quality is definitely a big step up from the MOD DVD. It may well be the same source, and probably is. But there's a lot more details you can see. As one simple example, the coverage of the Chess Game when they get down to the eye level of the chess pieces: In the earlier DVD and in earlier video releases like the laserdisc, the backdrop was an indistinct black void, which is how I recall seeing it in the theater. But on the Blu-ray, you can now see the folds of the black curtains hanging back there. Probably not something the filmmakers wanted you to see (like the wire holding the Cowardly Lion's tail in The Wizard of Oz) but fascinating to me nonetheless.

Not a particularly good movie, but it holds a place in my heart in spite of all of its shortcomings. (Apologies to card cheat robot "Clark"...) And it's an opportunity to see Blythe Danner around the time that the world received Gwyneth. (And yes, you are that old) BTW I did always like the nickname of Danner's character - "Socks".

I agree with what others are saying though still like it. Fonda seems to be having a good time in it. the ideas are actually kind of neat, but the movie doesn't really capture it too well. But I'd quite like to go to any of the "worlds" featured. Like the feeling you are actually going into space...

A shame they didn't just include this in a double feature with the first film. $20 amazon.com price. I'll wait until I can get both for about that.

I blind bought it for $10 on amazon.ca along with Westworld mainly because it had Fonda. I mean, how bad can a Peter Fonda film be?

I guess I'll find out!