The original voice actors are coming back! Only John DiMaggio's contract hasn't been finalised yet. 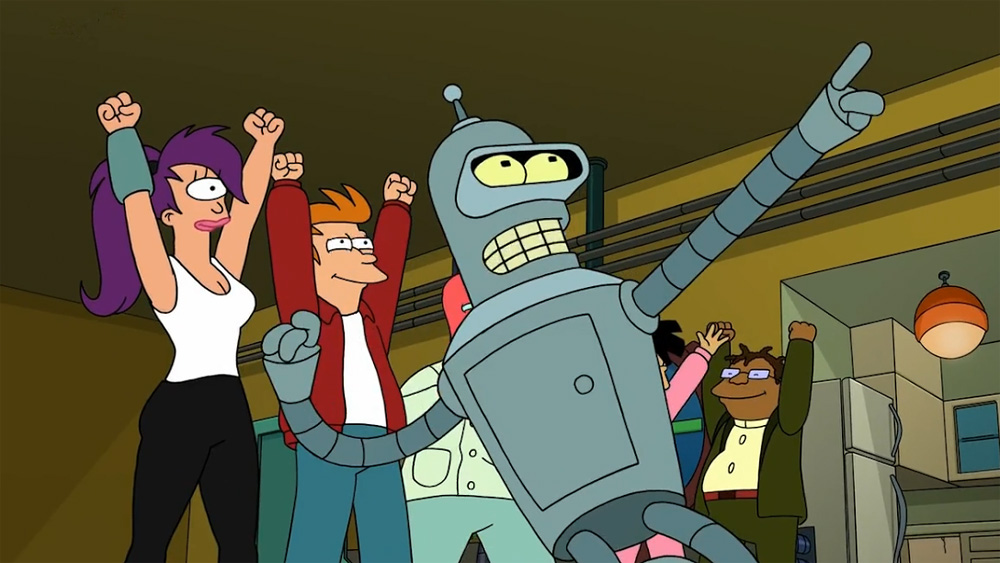 Good news, everyone! “Futurama” is being revived at Hulu. Variety has learned that the streaming service has ordered 20 new episodes of the adult animated sci-fi comedy series. The revi…

But then again, they copied all the ICE AGE voices for Disney... Kinda like REN and STIMPY.

Though I hope they can get DiMaggio back.

I’m in my fourth watch of Futurama, somewhere in the sixth season (been watching intermittently the past 18 months). It would be great to have a whole new season to start when I finish!

Is this really good news? The last revival was pretty subpar all things considered.

Great news! I hope that DiMaggio will come onboard.

Lord Dalek said:
Is this really good news? The last revival was pretty subpar all things considered.
Click to expand...

It’s about impossible to top Seasons 4 and 5. But the Season 7+ reboot brought some great episodes like The Late Philip J Fry and Lethal Inspection. I’m enjoying the rewatch. I don’t know what to expect of yet another reboot, but I’m hopeful it’s got some solid stories to tell again.

I’m in. Whatever new Futurama there is, I’m in.

I’m totally behind on the Futurama train! I watched it on and off during its original run and loved it, but had to catch everything I missed around 2003 when Cartoon Network started showing the reruns. I saw those 4 straight to DVD specials that started with Bender’s Big Score in 2007, but haven’t really seen anything since. I’m gonna have to catch up and maybe just start from the beginning again, because those specials are a little fuzzy after Bender’s Big Score. I remember the last one was called Into the Wild Yonder or something, and can’t say a thing about what happened in it.

I'll skip it if they don't get Dimaggio to reprise Bender. He is the voice of that character and to have anyone else do it is just wrong. It would be better to have Bender "dying" and introduce a new character than to try to replace his voice.

i will give it a chance regardless of casting.

DaveF said:
i will give it a chance regardless of casting.
Click to expand...

Me too but it will be really, really disappointing if they can't get John DiMaggio back.

I'm cautiously optimistic. It seems like Futurama declines in quality with every reboot, and I like the way they ended things last time, but who knows. I don't want it to become another Simpsons.
W

CAlford said:
I'm cautiously optimistic. It seems like Futurama declines in quality with every reboot, and I like the way they ended things last time, but who knows. I don't want it to become another Simpsons.
Click to expand...

Well, the good news is that Futurama didn’t exist long enough in both incarnations to be run into the ground, and there’s been a lot of time to come up with new ideas. What I would be worried about is if they went the way of the Simpsons (Family Guy too) and got too political. The show got insufferable when every other episode was a Lisa episode, taking on x
Last edited: Mar 4, 2022

Futurama never shied away from political or hot button topics, and often handled them more deftly than the Simpsons. The show was at its best when it highlighted the diverse cast of supporting characters (creatures?) it created over the years.

BTW I’d love to see the first four seasons released on Blu-ray.
You must log in or register to reply here.