When I was a youngster I loved to read comic books about World War II, such as "All American Men of War" and "Star Spangled War Stories." I remember thinking that if I ever had to go to war I would like to be in a tank, somehow believing that a tank would protect me from enemy bullets. I surely would have thought differently if I had seen Fury, a gritty, intense, realistic, and very violent film about tank warfare during World War II. Written and directed by David Ayer, Fury features exceptional production values and a fine ensemble cast headed by Brad Pitt. 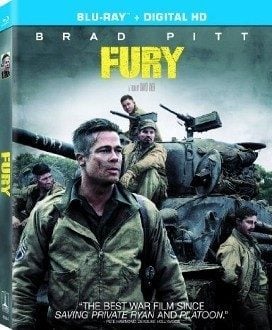 The action takes place in Germany during April, 1945, the final month of the war in Europe. The handwriting has been on the wall for the Nazis since the German counterattack during the Battle of the Bulge was repulsed, but the German Army fights on. A smoke-filled battlefield is littered with heavily damaged American Sherman tanks, but one has survived the fight with its crew intact. This particular tank is nicknamed "Fury," and the crew is headed by the tough-as-nails Sergeant Don Collier (Brad Pitt). Collier and his men have been together since Northern Africa, but one of the soldiers did not survive the latest battle. The others are "Bible" (Shia LaBeouf), who occasionally annoys his companions by reciting scripture and singing hymns; "Gordo" (Michael Peña), a Mexican-American; and Grady (Jon Bernthal), a profane redneck.

The crew effects repairs to the tank and they make their way back to the American lines. There Collier gets the unwelcome news that the replacement for his dead crew member is a green young soldier named Norman (Logan Lerman). Norman has had no training in manning a tank. In fact, he is a clerk-typist whose only training was learning to type 60 words per minute. He was chosen at random to fill out the crew of Fury.

Three years of war have hardened the rest of the men to the horrors of war, but Norman is totally unprepared for what he is about to experience. Assigned to man a machine gun, he freezes when a convoy of tanks is ambushed by young boys who have been conscripted into the depleted German Army. Collier holds Norman responsible for the losses incurred during the ambush, and he then tries to teach the young solider a lesson in a rather horrific way. That lesson seems to work, however, and when the convoy moves into a German town Norman acquits himself well as they rid the town of Nazi soldiers. The film then takes an extended pause from battle when Collier and Norman enter the apartment of two women and decide to stay with them for a while. We discover that Collier, for all of the toughness he has built up after three years of war, still has a strong streak of decency in him.

To a certain extent Fury is reminiscent of Lebanon, the 2010 film about an Israeli tank crew. Both films do any amazing job of depicting the claustrophobic conditions under which tank personnel operate. The crewmembers of the tank have their differences, which they are not reluctant to put on display, but when push comes to shove they act as a team and look out for one another. They know that the war in Europe is nearly ended, and to a man they are convinced that Sgt. Collier will get them home alive, even as the German soldiers show that they intend to fight to the bitter end.

Brad Pitt is excellent as Collier, who initially is disgusted by Norman but soon is calling him "Son." The young actor Logan Lerman does a fine job as the misplaced Norman, making viewers believe that a timid clerk-typist could be turned into a killing machine in a matter of days. The battle scenes are beautifully choreographed, in particular a very exciting contest between three Sherman tanks and a technically superior German Tiger tank.

Fury is not an entirely new take on World War II, and its exciting climactic battle scene strikes me as being somewhat implausible, but it certainly reinforces the message of General William Tecumseh Sherman that "War is Hell."

The 2.40:1 1080p picture is beautifully rendered via the AVC codec. Sony has delivered a typically superior Blu-ray transfer. In the opening film I was a bit concerned by the lack of shadow detail, but as the film progressed I decided that the opening scenes were deliberately filmed very dark in order to convey the close quarters in which the five-man crew has to live and work. There is very little sunshine in Fury, as nearly every day seems to be overcast and the tanks are forever sloshing through mud, but the muted colors are accurate and appropriate. The overall picture quality is very sharp, with excellent detail throughout.

The audio quality is in every respect the equal of the video. The dialogue is generally clear and understandable. The German characters speak in German (and Collier is fluent in German), so German subtitles helpfully pop up to let viewers know what is being said. The battle scenes will give your audio system a real workout, what with bullets flying, artillery blasting away, and bombs being dropped from the sky. There also is an evocative music score by Steven Price, who won an Academy Award for his work on Gravity.

This Blu-ray disc has a nice array of extras.

First up are 16 deleted and/or extended scenes, which have a combined running time of approximately 50 minutes.

"Blood Brothers" is a featurette in which cast members talk about their experiences while making Fury. It has a running time of 11 minutes.

"Director's Combat Journal" is a 17-minute featurette in which write/director David Ayer demonstrates how the combat scenes were set up and filmed and also shows his interactions with various members of the crew.

"Armed Warriors: The Real Men Inside the Shermans" includes the reminiscences of four World War II veterans who were tank crewmen when they were 21 or 22 years old. It is a fascinating featurette which has a running time of 12 minutes.

If you want to learn more about World War II tanks, "Taming the Beasts" is the featurette for you. The producers actually used real, working Sherman tanks in the film. They even were able to borrow the only working German Tiger tank in the world from the Bovington Tank Museum in the U.K. This featurette has a running time of 13 minutes.

Also included is a still photo gallery and trailers for The Equalizer, Whiplash, Foxcatcher, and Predestination.

Fury is in many respects and old-fashioned, straightforward war film about how men bond together when fate places them in unthinkable circumstances, a bonding which allows each of them to say that being a member of Fury's crew is the "best job I ever had." However, Fury is is more in tune with 21st Century sensibilities in its realistic and oftentimes horrifying depictions of wartime carnage. It is not for the faint of heart, but anyone who was able to watch Saving Private Ryan will certainly appreciate the many strengths of Fury.

Sony has provided us with links to various clips from the film. I have not reviewed these for spoilers, so proceed at our own risk!

Awesome Richard, I have been waiting for this one to come to Blu. Ordering now via the HTF link!

This is a blind buy for me. Should be at my door tonight and hopefully might get a chance to watch this weekend.

I watched it last night. I never saw it in the theater

being a old armored vehicle crewman, this movie was very well done. I really liked it.

I also watched this last night. Fantastic, gritty, realistic and brutal. The final act is amazing.

I watched it in a movie theater and I'm looking forward to watching it again in 1080p. IMO, an underrated film from 2014.

Saw this with my son, a tank fanatic most of his childhood life, at the theater and am in for the BD. Excited to watch the featurette on the real tanks used. Glad to hear they had a real Tiger. The only other film I know of that used a real Tiger was Kelly's Heroes, a classic.

Great film, reminds me of Saving Private Ryan in its pace and narrative. Will defintely pick this up. Terrific movie-making.

I know it is a long film as it is, but after watching the deleted scenes, I felt that some of them should have been left in. Some of the scenes fleshed out the characters a bit more.

Saw it opening weekend when it debuted and I will be purchasing it. Great flick and I can't wait to see it again in my newly remodeled home theater.

I picked this up yesterday on sort of a blind buy (it seemed like the kind of film I would like ). I planned to watch it this weekend but after reading this excellent review I think I'll give it a go tonight.

OK - That was worth it. I"m glad I chose to watch it tonight.

I finally watched this film. I was ambivalent toward it. On one hand, I thought it wasn't too bad. On the other hand I thought it was terrible. The further I get from it, the more I think it was terrible. The only part where a person felt involved in the film was during the battle with the Tiger. The rest of the film felt like it was trying to out do "Saving Private Ryan" and kept coming up short. Then the film completely fell apart at the end with a battle sequence that ended looking like I was watching an arcade game.
K

I think this speaks for itself, that this is one of the problematic releases:

If these are true, it seems that Sony "heard" the people, and corrected the black crush error of their US bluray, in their upcoming German release!


Hope all the other affected titles are corrected too, in their European releases.
You must log in or register to reply here.