With the twenty-fourth James Bond picture SPECTRE just around the corner, MGM is dusting off previous transfers of its 007 movies and packing them into attractive steelbook cases with an Ultraviolet code inside. While From Russia With Love wasn’t the first Bond film that mentioned the nefarious criminal organization, it’s the first one that makes it an important part of the plot, introduces the faceless (for now) Blofeld, and sets up precedents for Bond films that would be followed through many subsequent movies. It’s also one of the very best James Bond movies ever made. 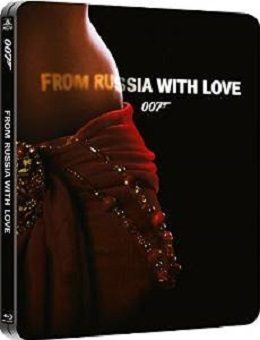 SPECTRE (the Special Executor for Counter-intelligence, Terrorism, Revenge, and Extortion) has tasked genius chess grand master Kronsteen (Vladek Sheybal) to come up with a scheme to bring down secret agent James Bond (Sean Connery) while tantalizing him with the possibility of acquiring a Soviet decoding machine, the Lector, through a renegade Soviet operative Tatiana (Daniela Bianchi) who has supposedly fallen in love with him from his photograph. Though MI-6 suspects some kind of trap, M (Bernard Lee) nevertheless lets Bond pursue the matter, armed for the first time with some of Q’s (Desmond Llewelyn) field equipment and sets him off to Istanbul. What Bond doesn’t know is that a nasty assassin Red Grant (Robert Shaw), selected for the assignment by brittle Smersh double agent Rosa Klebb (Lotte Lenya), has orders to kill him as soon as Bond has the Lector. Until then, he serves as a guardian angel of sorts for the spy since Bond has Russians after him and his Turkish power broker/host Kerim Bey (Pedro Armendariz).

With a pre-credit sequence that ranks as one of the best in the series (Bond appears to be killed by Red Grant), a memorable theme song (not sung, however, until eighteen minutes into the film), main title credits that celebrate the female form, and the first appearances of Blofeld and Q, From Russia With Love establishes many Bond firsts. But director Terence Young, after doing a smashing job with Dr. No, fashions an even more complex and entertaining follow-up thanks to an intricate screenplay by Richard Maibaum and Joanna Harwood that requires attention to catch all of its multifaceted components. The set pieces are pretty dazzling for a film that was still operating with only a decent-sized budget: the attack on the gypsy camp, the underground reservoir, and three magnificent action scenes practically back-to-back at the climax: the brutal fight between Grant and Bond in a tight Orient Express train cabin, a helicopter ambush on 007, and a motorboat blockade which seems at first hopeless for Bond and his lady. And there is still one more action scene to come! Yes, for its male audience there is a girl-on-girl fight, and Daniela Bianchi is one of the most captivating Bond girls (Eunice Gayson also makes a brief appearance early on as does the always reliable Lois Maxwell as Miss Moneypenny).

Sean Connery continues to impress with his ease, charm, and charisma in the role of 007. Robert Shaw though only on screen in fits and spurts through much of the movie nevertheless portrays expertly a menacing killer without having to make a single verbal threat until the mask finally comes off and he gets the upper hand on his nemesis. Pedro Armendariz who was in very frail health throughout the shooting and died before filming was completed certainly comes across as a man of action through a polished demeanor that’s very appealing. Lotte Lenya is a great villainess, again disappearing for large chunks of the movie but being positively lethal any time she enters the frame. Daniela Bianchi, a first-runner up for Miss Universe, may not have great acting chops here, but she does well with her role and wears a succession of wonderful outfits to stunning effect.

The film is framed at 1.66:1 and is presented in 1080p resolution using the AVC codec. Though there are a few long shots where sharpness is questionable, most of the film is crisp and detailed with expert clean-up that makes the film appear almost as if it were a new release. Color is vivacious throughout with very appealing skin tones. Black levels are good rather than great, but contrast has been consistently applied. The movie has been divided into 32 chapters.

The disc offers sound designs in both DTS-HD Master Audio 5.1 and Dolby Digital 2.0 mono. The mono is louder and more brittle though this lossy track may be the one preferred by purists. The lossless audio track lets John Barry’s background music score (with Lionel Bart’s haunting theme song) be the primary inhabitant of the surround channels. There are some atmospheric split effects, but they hasn’t been overdone. Dialogue has been nicely recorded (with some obvious looping, of course) and has been placed in the center channel. Any traces of hiss or other age-related artifacts are long gone.

Since the disc itself is identical to the previously released Blu-ray, there are no additional bonus features. Thanks to Cameron Yee who has allowed me to use his outstanding summaries of the bonus features from his earlier critique for this review.

Audio Commentary with Director Terence Young and Members of the Cast and Crew: John Cork of the Ian Fleming Foundation serves as the moderator/narrator for this collection of trivia and pre-recorded interview clips with cast and crew. It is tightly scripted and Cork is clearly reading, but the information is interesting and well chosen, with the interviews enhancing it. The only criticism is the commentary packs in so much information that it is sometimes hard to keep up, but this is usually alleviated by the pre-recorded interviews.

Ian Fleming: The CBC Interview (7:42, SD): Black-and-white television Canadian news interview with Fleming, produced on the event of Fleming's death in 1964. The opening shot provides a bit of interesting trivia related to GoldenEye.

Ian Fleming and Raymond Chandler Featurette (5:11, SD): Fleming's audio interview of Chandler for the BBC, set to a slideshow of archival photos of the two authors.

Ian Fleming on Desert Island Discs (5:11, SD): BBC audio interview with Fleming, discussing his time in the British Navy, working as a journalist, and his writing routine. Set to a slideshow of archival photos.

Animated Storyboard Sequence (1:27, SD): Original storyboard sequence of the boat chase scene, with the actual scene edited in for comparison.

007 Mission Control: An interesting feature, giving random access to scenes around a particular character or theme, all in 5.1 DTS HD Master Audio and 1080p high definition 16x9 1.66:1 video. Better than skipping through the feature disc? It depends. For fans of the opening title sequence, this is an easy way to access it. And obviously users aren't meant to watch all the clips, but only access their favorites; otherwise, why not just watch the feature? The one departure from simple clips from the film is the "Exotic Locations" item, which is a montage of film locales with narration by Maude Adams. In high definition video and stereo audio.

Inside From Russia With Love (33:43, HD): History of the film, featuring interviews with cast and crew and archival photos. Not an exhaustive treatment, but nicely produced and a good catch up with surviving contributors to the film. Daniela Bianchi receives a good share of interview time, while Sean Connery provides only a brief soundbite.

Theatrical Archive: (7:31, HD) Three theatrical trailers. The second trailer, "Bond Back to Back," promotes a double feature of the film with Dr. No and the third, "Bond Sale," a double feature with Thunderball.

Still one of all-time best of the James Bond pictures with a plot that’s complex enough to completely hold one’s attention, gorgeous locations, and exciting action scenes, From Russia With Love is a Bond film that pretty much has it all. The disc itself is exactly the same as previous Blu-ray releases, right down to the studio logos, artwork, and menus. The steelbook is at present an exclusive for Best Buy, but Amazon is taking orders for an eventual release through them, and marketplace sellers are also selling it for fairly outrageous prices. For those who don’t have the movie already, highly recommended!

Thanks for the review. I have the bond 50 set and this is a great title.
I'm looking forward to seeing the 4K blu Rays in a few years. This is the same disc included in the bond 50 set

and Daniela Bianchi is one of the most captivating Bond girls
Click to expand...

She is probably my favorite from the Connery era.

Some great vintage radio spots for from Russia here:

One of my favorites and maybe the best use of the opening credits for the steelbook art. I wish that they did more titles

in steelbooks beyond the few released.

albert_m2 said:
One of my favorites and maybe the best use of the opening credits for the steelbook art. I wish that they did more titles
in steelbooks beyond the few released.
Click to expand...

Agreed. New extras or transfers would've been great too. I think a 30th anniversary version for a few to a kill and one for moonraker would be great.
Now if you will excuse me, I'm off to watch my bond 50 set!
You must log in or register to reply here.