For Your Eyes Only Steelbook Blu-ray Review

After the outrageous over-the-top space shenanigans of Moonraker, the James Bond producers wanted to bring the franchise back to Earth and back to basics, and they accomplished their aim rather splendidly in For Your Eyes Only, arguably the second best of all the Roger Moore-Bond adventures. MGM has reissued its original Blu-ray release of the film in new steelbook casing and made it a Best Buy exclusive (for now). Everything is the same as before, so the very good picture and sound quality should please those new to the film or those who wish to collect the steelbooks. 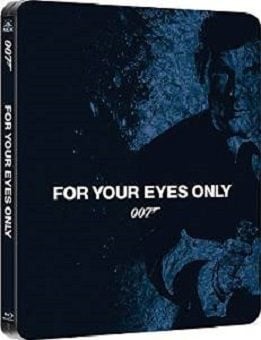 When one of Britain’s vital marine transmitters the ATAC goes down in a ship explosion, James Bond (Roger Moore) is tasked to recover it before Russia or agents operating in their interests can retrieve it from the bottom of the ocean. Bond finds himself trying to determine who the middle man is who is trying to negotiate with the Russians for the ATAC: Aristotle Kristatos (Julian Glover) or Milos Columbo (Topol). Both men have shady henchmen in their employ, but the villain doesn’t show his hand for quite a long time. In the meantime, beautiful Melina Havelock (Carole Bouquet) is out for revenge against whichever of the two villains ordered her parents killed, the couple working for the British government in searching for the ATAC, and it takes all of Bond’s charm and persuasive tactics to keep her from going rogue amid very dangerous company.

Bringing experienced writer Richard Maibaum back to co-write the script with producer Michael Wilson and promoting second unit director John Glen to his first feature assignment, the producers started off with a strong hand all around, one of the reasons this film stands out among the very erratic Roger Moore output of the 1970s and 1980s. Things get off to a smashing start with a very entertaining remote-controlled helicopter sequence which combines the thrills and hilarity that are hallmarks of all the best Bond films. There are plenty of chases: an early romp down a mountainside and a later three-act chase with Bond on skis where he maneuvers mountain slopes, a ski jump, and a bobsled run, all magnificently staged and shot. The underwater scenes in this film are also gloriously filmed and quite arresting (yep, there are plenty of sharks around) and much less tediously extended than those in Thunderball while a mountain climbing climax certainly has its hair-raising moments. This movie is distinguished by a longer list of villains than usual: assassin Gonzalez, lethal biathlon champion Erich Kriegler, the corrupt Locque, a mysterious countess, and, of course, the two enigmatic men whom the screenwriters do a magnificent job hiding the true villain for at least half of the film. There is less romance this time out, however, as Bond has a quick rendezvous with the countess (Cassandra Harris, real-life wife of Bond-to-be Pierce Brosnan) and doesn’t actually hook up with hauntingly beautiful leading lady Carole Bouquet until the end of the film.

Not relying much on Q’s gadgets in the field this time out (even his Lotus car gets blown up early), Roger Moore returns to a more grounded and serious Bond in this film, and it suits him. Carole Bouquet is not only lovely but also emits real sorrow on the murder of her parents and a dedicated vengeance that seems quite real. Julian Glover and Topol are both charming if shady businessmen (and then when the real villain is unmasked, turns that charm into lethal bile) while both Michael Gothard as Loque and especially John Wyman as Erich Kriegler make excellent henchmen for the big boss. Real-life figure skater Lynn-Holly Johnson plays promising skating star Bibi Dahl but is smoother on the ice than she is delivering lines. Because Bernard Lee had died, Geoffrey Keen takes over, not as M but as the British Minister of Defense. Walter Gotell is his Russian counterpart eager to get the transmitter.

The Panavision 2.35:1 theatrical aspect ratio is faithfully delivered in a 1080p transfer using the AVC codec. Sharpness is rather erratic throughout the presentation. Close-ups of the stars sometimes go soft (obviously deliberately), and long shots aren’t very razor-edged or detailed while other scenes are all one would wish. Color is nicely presented, however, and skin tones are realistic throughout. Contrast also seems to be consistently applied resulting in good but not great black levels. The movie has been divided into 32 chapters.

The DTS-HD Master Audio 5.1 sound mix delivers a robust audio experience filled with panning effects through the soundstage and explosions and crashes with some real heft to them. Bill Conti’s electronic synthesized score is very early 1980s and sounds dated now (though that gorgeous title song featuring Sheena Easton is among the very best ever written for a Bond movie), but it does get a full outlay in the fronts and rears. Dialogue has been well recorded and has been placed in the center channel. There is also a Dolby Digital 2.0 stereo surround mix which sounds more than adequate for those interested.

Thanks to Cameron Yee for allowing me to use his research for the bonus features from his original critique of the Blu-ray release for my review of this Blu-ray Steelbook reissue.

Audio Commentary with Sir Roger Moore: A few interesting stories spread over two hours make the commentary difficult to recommend, especially with the frequent moments of dead air and Moore's tendency toward mere description/reaction to scenes. There also doesn't seem to be much information offered that can't be learned on the other special features.

Audio Commentary Featuring John Glen and Actors: John Cork of the Ian Fleming Foundation returns, but this time to introduce the commentary track ported from the previous release (not sure of the point there). The commentary follows the same scripted format as the others, combining pre-recorded audio interviews with bits of movie history and trivia, which gives the listener plenty to take in.

Audio Commentary Featuring Michael G. Wilson and Crew: Cork introduces another ported commentary track, this time centering on the experiences and memories of the crew. Once again the scripted commentary and inclusion of pre-recorded interviews make for an overall more interesting and consistent experience.

Deleted Scenes and Expanded Angles: Deleted scenes include one from the hockey scene (2:05, HD), in which Bond dumps a load of snow on his opponents, and the other a shortened bit of dialogue between Bond and Melina (1:07, HD). The "Expanded Angle" segment makes use of the multi-angle feature, allowing the user to switch between the original cut and unused footage of the same scene. A third video track puts the two side-by-side for comparison.
Bond in Greece (5:56, SD): producer Michael Wilson comments on behind-the-scenes footage from the shoot in Greece.

Bond in Cortina (4:19, SD): Wilson comments on behind-the-scenes footage from the shoot in Cortina, Spain.

Neptune's Journey (3:33, SD): Wilson comments on behind-the-scenes footage from the underwater shoots, which were directed by Al Giddings. Turns out the sub built for the film was the catalyst for the formation of the Ian Fleming Foundation.

007 Mission Control: An interesting feature, giving random access to scenes around a particular character or theme, all in 5.1 DTS HD Master Audio and 1080p high definition 16x9 2.35:1 video. Better than skipping through the feature disc? It depends. For fans of the opening title sequence (with and without text), this is an easy way to access it. And obviously users aren't meant to watch all the clips, but only access their favorites; otherwise, why not just watch the feature disc? The one departure from simple clips from the film is the "Exotic Locations" item, which is a montage of film locales with narration by Maude Adams, presented in high definition with stereo audio.

Inside For Your Eyes Only (29:46, HD): Brief history of the film, featuring interviews with cast and crew and archival photos and film. Spends time on the filmmakers bringing Bond "back down to earth" after the outlandishness of Moonraker and the various stunt sequences. Nicely produced, entertaining, with interesting archival footage.

For Your Eyes Only is one of the best of the Roger Moore Bond films, and it gets a very good (but sadly not great) Blu-ray re-release in the new steelbook case. Best Buy has the exclusive rights presently for the steelbook series, but Amazon has a page set up for it and is taking orders for a future date. Marketplace sellers are offering it now but at sometimes outrageous prices. Recommended!

The best James Bond actor! 7 bond films! He is an all time high!!
I recall watching fyeo on VHS many times in the 80s. The blu Rays is awesome. I like the art for the steelbooks in this one but go with the bond 50 set!!
I am enjoying these new film reviews!!!

I love the vintage radio spots for this film!!