International FLIGHT OF THE PHOENIX (1 Viewer)

Flight of the Phoenix has been released by Masters of the Cinema Series with a new HD 1080P transfer. The story is about a group of passengers on a cargo plane that crashes in the Sahara Desert during a sandstorm. The movie stars James Stewart, Richard Attenborough, Hardy Kruger, Ernest Borgnine and was directed by Robert Aldrich. Included with the Blu-ray is a 20 page booklet describing the history of the film, director and actors. 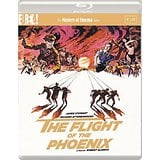 My copy is due to arrive any day now - really looking forward to watching it again when it does!

I'm going to wait on the USA release.

Watched it last night. Really disappointed...Does not look like a new scan. The 1.85 framing somehow looks wrong. Hoping it will be released in the US and will be a 4K.

I would be very pleasantly surprised if a new scan is produced (even better if it's 4K) - slow burn of a movie that is probably not in keeping with the pace desired by modern audiences => costs would probably not be recouped so unlikely to happen. Sad.

The Blu-ray looked good to me certainly much better than the DVD.
T

It looked quite good to me. Very deep blacks ,important since many scenes take place at night. Flesh tones are very good. Very sharp for the most part except for a few moments at the start. Print is in very good shape. Music can sound a little flat at times but it's mono. Recommended

trajan007 said:
It looked quite good to me. Very deep blacks ,important since many scenes take place at night. Flesh tones are very good. Very sharp for the most part except for a few moments at the start. Print is in very good shape. Music can sound a little flat at times but it's mono. Recommended
Click to expand...

I agree. I think it looks nice overall.

Hey guys, I stumbled onto this blu ray release on Amazon. I didn’t know about it.

As far as I can tell, this is still a Region B release. after nearly 4 years, maybe it’s not coming to Region A. So I think I’ll pick it up. Just thought I’d check here in case you guys know of any news of a US release. Thanks.

Twilight Time at one point said they were going to do it, but they’re not around anymore. It’s a Fox title and we don’t really know much about what Disney’s licensing policy is going to be with those titles. I’d love to have a copy.

Hey Josh, thanks for chiming in. Well, my guess is this is not going to be picked up by Criterion. Not sure if Kino would do it. This probably isn’t the kind of title Arrow would do. Might have to consider this version then.

It's on Amazon prime in HD to buy or rent.

Nelson Au said:
Thanks, I just looked and I see it’s $9.99 to buy. I also see it on iTunes for the same price to buy. That’s good to know!
Click to expand...

I purchased it from iTunes a couple of years ago for $4.99

That’s cool Robert. I’m probably going for the blu ray and see how that works out.

Nelson Au said:
That’s cool Robert. I’m probably going for the blu ray and see how that works out.
Click to expand...

The original thread is here ...

My general experience is that with older FOX films (eg Enemy Mine and Journey to the Center of The Earth) Eureka blu-rays will give a nag screen stating that Eureka disks are "only licensed for the UK and Ireland" when played in a Region A player and then using the Top Menu trick will play just fine -exepting any PAL based special features.

As DISKNEE has it - a North America Release on any non-digital format is highly unlikely - unless DMC considers issuing it as a club exclusive - which they won't release their own catalog films any more.

Thanks Bryan. That reminds me, I missed the Enemy Mine disc too. . I’ve been looking for a Twilight Time disc. I’m going to try the Masters of the Cinema blu ray of The Flight of the Phoenix.

I received my Region B copy of The Flight of the Phoenix. As I expected, the disc will only display the screen that says this disc is region locked. I tried on my Region A Oppo player. I wasn’t aware of the Top Menu trick before. I tried it and it did not work. Maybe because the player is connected to the Internet via wifi.

But my plan all along was to use MakeMKV to make a copy that plays in Plex so I can stream it in my home, I did that and it worked! I compared the image quality between the blu ray and the old DVD. I saw modest improvement on the blu ray. I only watched a little bit to test the playback. So I’ll watch the film later. From what I can see, the real improvement is sharpness and detail. Audio quality seems on par with the DVD. It’s cool to have a high def copy of this film now.

Disappointing. I was hoping for a Region A release of this one day by Twilight Time. I remember when it was rumored that they were going to release it.
You must log in or register to reply here.