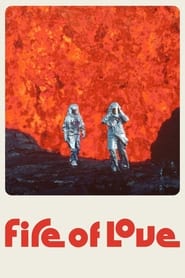 Plot: Katia and Maurice Krafft loved two things — each other, and volcanoes. For two decades, the daring French volcanologist couple were seduced by the thrill and danger of this elemental love triangle. They roamed the planet, chasing eruptions and their aftermath, documenting their discoveries in stunning photographs and breathtaking film to share with an increasingly curious public in media appearances and lecture tours. Ultimately, Katia and Maurice would lose their lives during a 1991 volcanic explosion on Japan’s Mount Unzen, but they would leave a legacy that would forever enrich our knowledge of the natural world.

Has anyone seen this yet?

Neon is doing a platform release. As I write this, according to The Numbers, it has been in 99 theaters so far. I've heard good things about the movie out of Sundance and look forward to its opening in my market. The Rotten Tomatoes score mentioned in the trailer is 100%, although one critic posted a negative one since then, knocking it down to 99%.

Also, I'm not saying this because I have a problem with Neon at all, but it is interesting to me that Neon is releasing this instead of Disney or perhaps Searchlight. It is a National Geographic Films release, and Disney owns National Geographic via its purchase of Fox, which is why National Geographic is one of the main brands on the Disney+ homepage. It isn't like Disney to give away stuff in which they are invested to other studios. So that is a surprise.

I'm hoping this comes to Disney+.

I'm not sure how accurate IMDB is but, on this page it says that Neon only has theatrical distribution rights National Geographic retains all video/VOD rights. Maybe Disney did not want to fund a theatrical run by itself and sought a partner in Neon.

Chris Will said:
I'm hoping this comes to Disney+.
Click to expand...

I think that is very likely. Neon has an output deal where its theatrical features go to Hulu after the fact, which of course is a corporate sibling to Disney+. So even if it went to Hulu after, it would still be within the Disney family.
J

It's very good, and one of those Docs that is worth seeking out on the big screen. Some of the footage is spectacular. Full review to follow

I saw it today.

This would not normally be an obvious choice for me. Science documentaries are not normally my thing. I'm usually just not that interested in science. But I thought this was great and a very pleasant surprise. It was really well-told and was never dry.

You don't really have to know much about volcanos in order to understand the movie because it is put together in such a way as to make sense to a general audience. The Kraffts just seemed like interesting people, which helped make their story investable for me. Watching the journey of their lives made it personal. Focusing on their relationship with each other was a great emotional hook. The science is built on top of that. It was also tightly edited and felt like it was just the right length for itself without wearing out its welcome. And the natural footage that they got is just jaw-dropping. I'm really glad I found this on the biggest screen possible

Fire of Love is getting a limited IMAX release. EXCLUSIVE: One of the most honored documentaries of the year is heading to the very big screen. National Geographic Documentary Films and Neon announced today they are bringing Fire of Love to sele…

I continue to highly recommend the film for those interested.
J

It has had an amazing run for a Documentary. It was originally scheduled to hit streaming back in August!

And, yes, it's a Doc that is worth experiencing on the big screen

Per Disney social media, Fire of Love will debut on Disney+ on November 11. 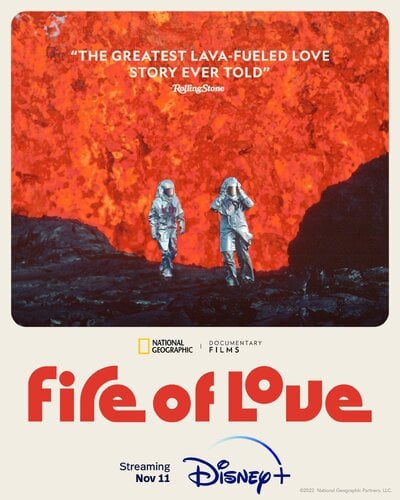 FIRE OF LOVE is now streaming on Disney+.

Katia Krafft and Maurice Krafft were the most famous amateur Volcano scientists for over twenty years - literal (lava) Rock Stars of sorts. That they died doing what they loved seems more apropos than tragic (not a spoiler; it's revealed in the first five minutes and is in all the publicity materials). Their story is well told in Sara Dosa's documentary FIRE OF LOVE.

Fortunately, the Kraffts left behind a treasure trove of materials from films to videos to stills to books and personal notes. Their life was also well covered in the French press and there is ample footage from TV programs. Dosa smartly assembles the information to not only detail their numerous expeditions, but also their personal lives. The Kraftts' devotion to their work truly became their only focus in life at a certain point, and they relied on sales of the films and books to become professionals - in turn, financing all their trips to exotic lands in pursuit of the latest volcanic eruption.

Those expeditions didn't just document the volcanic activity from afar, the Kraffts always dared to get closer and closer and closer. At one point Maurice dubs himself a “kamikaze” - akin to a tornado chaser. It was his life's dream to actually sail down a lava flow on a raft! The immediacy of some of the footage makes some of the scenes look like a “sci-fi movie” as is mentioned here. Even in the shots where neither Krafft is not in the actual frame, one still feels their presence. The images feel both unreal and intimate.

The trickiest balance that Dosa has to weigh is how to cover the lovable couple's demise. It isn't avoided. Indeed, the Kraffts themselves often refer to their own mortality considering how incredibly dangerous their exploits were. The narration (voiced well by Miranda July) is occasionally over-written (when in doubt, let the footage tell the story), but is effective nonetheless. FIRE OF LOVE is an engaging look at a pair of daredevil scientists whose mutual love of volcanoes joined them forever together.