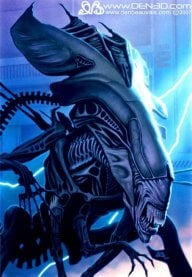 Hello Mr. de Lauzirika,
I run the blog Strange Shapes, which covers the first three Alien movies, and I have been researching the whereabouts of original Alien performer, Bolaji Badejo. According to Dennis Lowe, who worked on Alien, and Les Barany, HR Giger's agent, Mr Badejo is believed to be dead (Mr Barany is currently helping me validate these claims). Post-1979, Bolaji simply disappears - he appears in no Alien interviews or media. I was wondering if you could provide me with any information regarding Bolaji, if you are privy to any. I would imagine that, when piecing together the Quadrilogy material, you too would have searched out Mr Badejo, or may have heard from Ridley Scott or associates as to Bolaji's fate post-Alien.
Thank you very much for your time,
Valaquen.
C


The quote on your site, which comes from an unnamed source (not me), is actually fairly accurate. We tried every way we knew how to locate Mr. Badejo, but to no avail. I do hope that he's still alive and well, wherever he might be.


Sorry I can't be of more help in your search.

Thank you, I would have disclosed the source but was asked not to, but I am confident of their accuracy (I received that particular source from HR Giger's agent himself). I have contacted Screen International, the magazine who allegedly reported the death, but they have not responded. I would only ask two things from you if you have the time to answer these; were death records checked? And secondly, has Ridley Scott or any of your interviewees commented on Bolaji? I have spoken to Jon Sorensen & Dennis Lowe who worked on Alien's SFX, and also Les Barany, and nobody knows a solid thing.
Thank you for your time.
You must log in or register to reply here.
Share:
Facebook Twitter Reddit Pinterest Tumblr WhatsApp Email Link