Based on the first novel in E.L. James’ immensely popular trashy bondage romance trilogy, Fifty Shades of Grey arrives on Blu-ray just under two months after its highly successful theatrical run, even though it was pounced on by critics (currently earning a 25% rating on Rotten Tomatoes). The disc is top notch in terms of its presentation and set of extras, but the movie itself never captured this reviewer's interest. 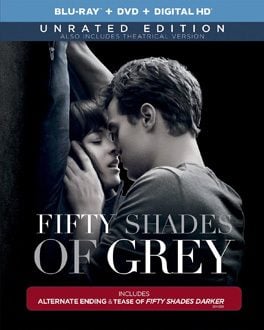 When college senior Anastasia Steele (Dakota Johnson) fills in for her illness-stricken roommate, Kate (Eloise Mumford), at the last minute to interview Christian Grey (Jamie Dornan), a young, wealthy executive, for the college newspaper. Even though the interview is scripted, Ana leaves thinking it went badly, but is surprised when Christian answers all of the questions in an email sent to Kate, and Christian visits her at the hardware store where she works, suggesting a photo shoot for the newspaper article. Christian continues to pursue Ana, inviting her for an awkward coffee date, then showering her with gifts, and eventually inviting her to his apartment in Seattle, offering her a contract as his “submissive” to his “dominant” after introducing her to his “red room” of BDSM toys and devices. This leads the curious but inexperienced Ana to accept Christian’s advances, including moving into his apartment but sleeping in separate quarters, because, as Christian tells Ana over and over again, he doesn’t do romance.

Fifty Shades of Grey is what many may refer to as a critic-proof movie, being able to bring in a worldwide box office take of just under $570 million despite being trampled on by critics. The popularity of the trilogy of novels obviously had a great impact on the initial box office (selling well over 90 million copies worldwide). But as a movie, Fifty Shades of Grey is a complete bore. Contrary to what many may say, this film is not about a romance. If anything, it’s about an abusive relationship with Christian coming off as a stalker who then takes pleasure in causing Ana pain. He shows up unannounced and uninvited several times, hires workers to show up at her apartment to fix/replace her laptop, and even manages to upgrade her airfare from coach to first class without her knowledge. Is it me, or is that just creepy? The leads, Jamie Dornan and Dakota Johnson, have no chemistry whatsoever. Sam Taylor-Johnson’s direction is tepid, so much so that the “love” scenes are boring - there is no shock value, no titillation to them at all. And if Fifty Shades of Grey is supposed to be an erotic drama, that is definitely not a good thing.

Two versions of the film are offered here via seamless branching, the R-rated theatrical cut and an unrated version that runs an additional three minutes. If you are hoping that the additional footage consists of sequences that would have earned the film an NC-17, you will be disappointed. Those three extra minutes are nothing more than a flashback montage tacked on as an alternate ending.

Captured digitally on the Arri Alexa XT by Director of Photography Seamus McGarvey, it should come as no surprise that Fifty Shades of Grey arrives on Blu-ray in a near-reference quality 1080p HD presentation. Preserving the film’s intended theatrical aspect ratio of 2.40:1, the AVC-encoded transfer has consistent colors without appearing over saturated, detail is excellent, and blacks are deep and inky. McGarvey’s cinematography and David Wasco’s production design come across beautifully on this disc. If anything, at the very least Fifty Shades of Grey is a good looking film.

The DTS-HD Master Audio 5.1 track is exceptional, even if it is mostly a dialogue-driven film. All five channels, plus LFE, are well-utilized, providing a 360-degree soundfield throughout. The music montages benefit the most, with added clarity, fidelity, and deep low-end while dialogue is still well-defined and not drowned out.

Behind the Scenes of “Earned It (Fifty Shades of Grey)” Music Video (1080p; 4:49): Director Sam Taylor-Johnson and Abel Tesfaye of The Weekend discuss making the music video.

DVD Copy: The R-rated version of the movie in 480p, trailers for The Boy Next Door, Satisfaction, The Gunman, Maps to the Stars,The Loft, Seventh Son, Unbroken, Heroes Reborn, and a smaller set of Special Features as on the Blu-ray version.

Digital HD Copy: An insert contains a code to redeem a digital copy of the R-rated version through both Ultraviolet partners and iTunes. The code is subject to expiration, but no expiration date was provided.

Fifty Shades of Grey may not be a good film, but it gets the red carpet treatment on Blu-ray, with excellent video and audio and a healthy set of special features sure to please the book and movie’s growing fanbase.

Yeah, this was our Friday night movie last week and I got blasted for saying it was "okay." And really, that's all Fifty Shades is...okay. I assume some of the missing pieces are going to be filled in during the next two movies (when Christian says he's fifty shades of f---- up...all I really wanted was the story about why he think it). I similarly didn't understand Anastasia's reaction at the end. Everything Christian did to her was consentual.


Then again, I was half paying attention to the actual story and using the rest of my brain to figure out why this was such a hit.