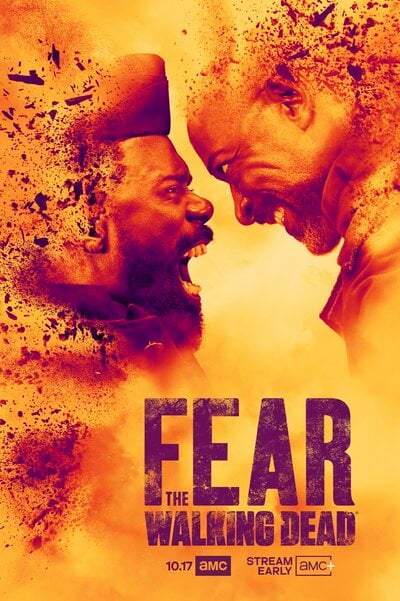 ​
The "Walking Dead" spinoff returns Sunday, October 17 at 9:00 p.m. ET/8c on AMC with all episodes available one week early on AMC+, beginning October 10.

Aisha Tyler, who directed an episode of Fear the Walking Dead in Season 6, is set to appear in front of the camera in the upcoming season. Other casting has not been announced, but Lennie James, Alycia Debnam-Carey, Maggie Grace, Colman Domingo, Danay Garcia, Austin Amelio, Alexa Nisenson, Karen David, Mo Collins, Colby Hollman, Christine Evangelista, Jenna Elfman, and Ruben Blades all appear in the trailer above.

Synopsis: "Teddy (John Glover) brought about his vision of 'The End' when he detonated nuclear warheads across the Texas landscape, but it will be up to those who survived to decide what 'The Beginning' will look like. And they'll have to do it in a world devoid of light and hope, where the outside air is just as deadly as the walkers they face. The survivors will find out who they really are and what they're really made of. Some will rise to the occasion, some will find new purpose, and some will redefine themselves -- even if it comes at a terrible cost to those they once considered family."

I still have 5 or 6 episodes from season six to watch! Had no idea this was coming so soon. I like season six though, so I’ll take this as an excuse to ramp up my watching of it before this new season starts. I really want to get back to watching it week-to-week.

ALL throughout season six, like since episode one, I’ve been seeing the “previews” for the season and this white-haired old man shouting “YOU’VE DESTROYED IT!” but have yet to get to whatever that’s about.

This show is pretty much full-on Mad Max at this point. Now we know why the "World Beyond" group stayed so far north for their cross-country trek.

It's interesting that the co-lead didn't even make an appearance this season until the episode before the midseason finale.

Tonight's episode provided some insight into Strand, who doesn't even really believe his own bullshit.

It took until episode 7 but there was finally a pretty good episode.

That's probably a little harsh but now that the half season is almost over, it feels like there's some momentum and less time for me to think "Why aren't these people completed irradiated at this point?"

After really enjoying the last couple of years, for the first time this year, I have found it an absolute chore to watch FTWD. I am always 2 or 3 episodes behind and have to force myself to watch them. I won't even mention the "World Beyond" series. I have all of them waiting on my PVR. I was not impressed with the first season and only watched because I thought they eventually will link all these series.

TJPC said:
I won't even mention the "World Beyond" series. I have all of them waiting on my PVR.
Click to expand...

For years, I've thought that Fear TWD has had peaks and valleys but I find World Beyond so bad that I feel bad for saying that it's bad. Like it sucks so hard that it doesn't need me piling on too. I haven't seen last night's World Beyond yet but I will say that one good thing about the show is that it does seem headed towards an ending (which makes sense since it was written as a two season series). The characters are now doing things where there's no going back for them.

I haven’t been a fan of the direction they went with this show with the nukes. Teddy’s plan was annoyingly stupid (couldn’t possibly wipe clean the entire planet with one nuclear sub, so what’s the point other than just shitting up a corner of one continent?) but that can be accepted as “insane person logic”. But geeze, the world has already ended with the dead. Now (this area of the world) has double ended. Talk about a hat on a hat.

But this being the situation, no one should be trying to settle or build anything anywhere near this irradiated area. All efforts should be focused on figuring out how to safely move north and/or west.

Sean Bryan said:
But this being the situation, no one should be trying to settle or build anything anywhere near this irradiated area. All efforts should be focused on figuring out how to safely move north and/or west.
Click to expand...

I'm guessing this has been addressed but is Strand's compound totally out of range of the fallout? It seems like if there was a change in the weather, there's a decent chance that the people there may start glowing in the dark. Either way, I'd be heading anywhere but Texas right now.

TravisR said:
I'm guessing this has been addressed but is Strand's compound totally out of range of the fallout? It seems like if there was a change in the weather, there's a decent chance that the people there may start glowing in the dark. Either way, I'd be heading anywhere but Texas right now.
Click to expand...

I think they said something vague about the location turning out to be safe, but he was at the sub not long before they launched and he got there under “normal” traversal. They also saw the blast and felt the shockwave. So I don’t see how they could be far enough away from potential fallout and radiation. Plus, you have characters that are clearly in the thick of it masking up and using Geiger counters, etc… that are in and out of the tower. I’ve enjoyed this show, particularly after the retooling several years ago, but this seems weirdly sloppy.

I'm going to be pissed if the back half of the season ends with Alicia succumbing to her infection. From where I sit, one of two things is true:
I also don't know how interested I am in yet another turf war in the Walking Dead universe, even if this one is elevated by having characters we've invested a lot of time in on both sides of the conflict.

I really enjoy the creepy atmospherics of this show, but I don't need to see another episode of any of the Walking Dead shows built around one of protagonists meeting a peculiar but ultimately benevolent stranger who gets killed by the end of the episode. It's one of the franchise's go-to moves for a filler episode, and I'm bored with it.

Adam Lenhardt said:
It's one of the franchise's go-to moves for a filler episode, and I'm bored with it.
Click to expand...

Especially for Fear. And especially when they knew it was the mid-season premiere. On the plus side, it's Fear The Walking Dead so the next episode or the one after that will be really cool since the quality of this series varies wildly from episode to episode.

Charlie's been an underutilized character since her initial run as a spy for the Vultures back in season four, so it was nice to see her get a chance to shine here. I liked most of the episode except for two things: