Farscape debuted in 1999 on the SciFi Channel and would achieve cult status worldwide during its four-season run, spawning a climactic mini-series, Farscape: The Peacekeeper Wars as a result from fans’ outrage at the series’ premature cancellation. Arriving exactly two years after its initial Blu-ray debut, Farscape: The Complete Series 15th Anniversary Edition is nothing more than a repackaging of that initial release. 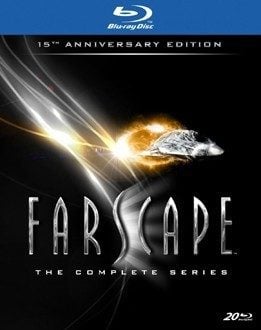 My name is John Crichton, an astronaut. I got shot through a wormhole in some distant part of the universe. I’m trying to stay alive aboard this ship. This living ship of escaped prisoners, my friends. If you can hear me, beware. If I make it back, will they follow? If I open the door, are you ready? Earth is unprepared, helpless, for the nightmares I’ve seen. Or should I stay, protect my home, not show them you exist? But then you will never know the wonders I’ve seen.It is this voice-over from the title sequences for season three that best sum up the main storyline for Farscape, a serialized science fiction drama that ran for four seasons on the SciFi Channel from 1999 through 2003. Ben Browder plays John Crichton, a test pilot who is launched into orbit around Earth and encounters a wormhole, catapulting his module into another galaxy, right smack in the middle of a space fight, and collides with a fighter, killing the pilot. He is picked up by Moya, a Leviathan, a living prisoner transport ship that has been hijacked by its inhabitants. Moya’s crew consists of Ka D’Argo (Anthony Simcoe), a Luxan warrior wrongly accused of killing his mate; Pa’u Zotoh Zhaan (Virgina Hey), a blue-skinned Delvian Priestess who murdered her mate for collaborating with the Peacekeepers; Dominar Rygel XVI (voiced by Jonathan Hardy), a deposed Hynerian ruler; and Pilot (voiced by Lani Tupu), a crustacean-like creature physically and psychically-linked to Moya. Also picked up is a Peacekeeper, Aeryn Sun (Claudia Black), who is eventually exiled to Moya when she is deemed contaminated by her interactions with the other species on Moya.Most of season one concerns Captain Crais (Lani Tupu), the older brother of the pilot accidentally killed in the collision with Crichton, and his vengeful quest to find and kill Crichton. The first season plods along, and it does not help much that these episodes run 50 minutes each. Near the end of the season, though, is when the series begins to get really interesting, with the introduction of Scorpius (Wayne Pygram), a Sebacean/Scarren hybrid obsessed with extracting the secrets of wormhole technology that an alien race implanted inside Crichton’s brain. It is this plot that propels much of the remaining three seasons as well as the mini-series, The Peacekeeper Wars. (Due to rights issues, the miniseries was not included, but rumor has it that Linosgate may be preparing that for an eventual release). Pygram really chews the scenery as Scorpius, and you can sense that he is really enjoying playing this character. Also introduced late in season one is Chiana (Gigi Edgley), a “monochrome” con artist and thief who escaped from her planet to avoid reprogramming.What set Farscape apart from other series on the SciFi Channel at that time was that it was one of the first truly original series on that network. Most of the first-run series on the network were shows that had previously aired on other channels (Sliders came from FOX, Mystery Science Theater 3000 from Comedy Central, and Stargate: SG-1 from Showtime). The series was developed as a showcase for what the Jim Henson Creature Shop was creating for movies and what they could potentially bring to television on a weekly basis. Eventually created by Rockne S. O’Bannon, no stranger to science fiction having written Alien Nation (both the theatrical film and television series) as well as creator of SeaQuest and a contributing writer to CBS’ 1985-1986 revival of The Twilight Zone, Farscape had more drama and depth than most of the other series on the network at the time, as well as an eventual epic story arc (including the love story between Crichton and Aeryn) that stranded the series in a cliffhanger when SciFi pulled the plug shortly after production on season four ended. It was mostly due to fans’ reaction to the cancellation that allowed Executive Producer Brian Henson to raise the funds to bring closure the the series with the miniseries, The Peacekeeper Wars.

Cinedigm has recycled not only the same upconverted transfers used on the previous A&E release from 2011, but the same encode and disc authoring on each and every disc (even the menus are identical), the only difference being the opening disc logos. This was verified by examining bit rates at key points of certain episodes, as well as comparing the amount of used space on each Blu-ray disc.From my 2011 review:Unfortunately, as Executive Producer Brian Henson has stated publicly, the original source materials for the series have gone missing, with only the original broadcast masters surviving. Since the series was never intended to be broadcast in high definition, the producers have decided to take the PAL 576i masters, clean them up and upconvert to 1080p and compress them with the AVC codec, maintaining the original broadcast aspect ratio. The result is an acceptable image with slightly improved color and detail over the prior DVD releases, but also introduces an overall softness and some occasional black crush, plus some interlacing issues. In addition, along the very far left and right edges of the frame during seasons one through three, there is some occasional artifacting that could have been masked by ever-so-slightly cropping the sides of the image. It is only mildly distracting if you are looking for it.

From my 2011 review:While the set lacks a true high definition image, it makes up for it with its DTS-HD Master Audio 5.1 mix. This is a very aggressive mix for a television series, and never sounds like a simple upmix from 2.0 surround to 5.1. Dialogue is clear and centered. Discrete effects and LFE are used where appropriate, and Subvision and Guy Gross’s scores envelope the soundstage.

The set is nothing more than a double-dip, recycling everything we’ve seen before, and adding nothing new. Fans of the series who own the previous DVD and Blu-ray releases will likely find themselves on the fence regarding this 15th anniversary repackaging, having to decide if the comic book insert makes this set worthy of an upgrade. Overall, 4 out of 5 if you do not own the prior release, 2 out of 5 if you purchased the set in 2011.

Thanks for the review. I've been meaning to check this out.I think you've got a typo in your audio rating (1/5 seems very low from how you describe it)

DaveF said:
I think you've got a typo in your audio rating (1/5 seems very low from how you describe it)
Click to expand...

Thanks - I've fixed the review.

One on my wishlist. I'll upgrade it to this version and wait for a sale. I'm finishing up the new Battlestar Galactica ... about to watch that final 3 parter, then The Plan and I'll have to buy the most recent movie release (releases?). This would be a great one to follow it up. ... come oooon sale!

Awesome series. Definitely worth checking out.