Far From the Madding Crowd, Director John Schlesinger's sumptuous film adaptation of Thomas Hardy's novel, has come to Blu-ray in all of its roadshow glory courtesy of the Warner Archive. 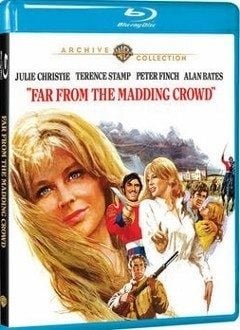 Far From the Madding Crowd takes place in Dorset, on the southwest coast on England, during the latter part of the 19th Century. Gabriel Oak (Alan Bates) is a poor shepherd who is raising his flock on land high above the beaches below. Bathsheba Everdene (Julie Christie), a beautiful young woman who lives nearby with her aunt, has caught Gabriel's eye. He brings her a young lamb to rear, but Bathsheba stays out of sight until he begins to return to his home. She then runs to catch up to him, giving him the opportunity to say that he wants to marry her. "And at home by the fire, whenever I look up, there you will be," he says. "And whenever you look up, there I shall be." Bathsheba is flattered, but she tells Gabriel that it is impossible "Because I don't love you."

Gabriel's plans go awry when tragedy strikes his herd of sheep, and he packs up and heads off to town to find work. In the meantime, Bathsheba has been called away due to the illness of her uncle. Unbeknownst to Gabriel, Bathsheba's uncle dies and she is the sole heir to his estate. There she catches the eye of another man, William Boldwood (Peter Finch), a wealthy farmer who is her neighbor. When Bathsheba asks her female servants about him, they warn her "There's no woman can touch him, miss. 'Tis said he has no passionate parts." A fire breaks out on Bathsheba's farm while Gabriel is riding by in a wagon. He jumps off to help, not knowing that he is about to be reunited with her. After he plays a large role in putting out the fire she offers him a position on the farm, which he accepts.

One of Bathsheba's housemaids is Fanny (Prunella Ransome), who has fallen in love with a handsome and dashing soldier, Frank Troy (Terence Stamp). Frank has promised to marry Fanny and she has been pressing him to set a date. When he finally agrees she show up at the wrong church on what was to be their wedding day, and he spitefully casts her off because he feels that she has humiliated him.

Boldwood, a lifelong bachelor, decides to propose marriage to Bathsheba. From a purely economic standpoint their marriage would make a great deal of sense, as they would be able to merge the two farms into one. The stumbling block, however, is that she does not love him. She promises to give him an answer by the harvest season. Then one day she meets Frank Troy, and almost immediately she is beguiled by him. Bathsheba now has three men in her life, all of whom would like to marry her. How this plays out is the subject of the rest of the film.

Julie Christie's career was on a roll when Far From the Madding Crowd was filmed. During the previous two years she had appeared in Young Cassidy, Darling, Doctor Zhivago, and Farenheit 451. Here she does a remarkable job as Bathsheba, a woman who is assertive and naive, self-assured and impetuous. Alan Bates is handsome and likeable as Gabriel, a hard-working, devoted employee who loves Bathsheba but who seemingly has no chance of ever winning her. Peter Finch is excellent as Boldwood, who is willing to wait for years if only Bathsheba will say "Yes." Terence Stamp, who was Julie Christie's lover at the time, gives a wonderful performance as the roguish Sergeant Troy. It is easy to see why Bathsheba falls for him, but is he any good for her?

Far From the Madding Crowd is beautifully photographed by Nicolas Roeg and boasts an outstanding score by Richard Rodney Bennett. Director Schlesinger does a fine job of condensing a lengthy novel into a film without compromising the story. This is the roadshow version of the film, complete with Overture and Entr'acte. It is yet another excellent Blu-ray which has been added to the Warner Archive library.

Far From the Madding Crowd is properly framed in 1080p at 2.40:1. The AVC codec has been utilized. The image is slightly soft at times, but that appears to be deliberate as it accentuates the pastoral look of the countryside. Primary colors are vivid and accurate, and the bright red uniforms of the soldiers demonstrate no bleeding whatsoever. The transfer is free of dirt and damage. This was an M-G-M production which is now owned by Warner, but thankfully the film still opens with the M-G-M lion.

The running time of 171 minutes reportedly includes three minutes of footage which were not included when the film was released in North America, but those three minutes are not identified.

The film's audio is presented in 5.1 DTS HD-MA English, with English subtitles. The audio is clean and crisp, with no age-related anomalies. There is some nice directionality, and the superb score by Richard Rodney Bennett is both sweeping and evocative.

There are just two extras on this Blu-ray disc.

A ten-minute featurette, "Location: Far From the Madding Crowd" is shown in standard definition at 16:9. I do not advise watching it before seeing the film because it contains many spoilers.

The film's theatrical trailer is shown in standard definition at what appears to be 2.35:1. It has not been restored but it is in fairly good shape.

Far From the Madding Crowd is a wonderful film which keeps the viewer's attention for all of its nearly three-hour running time. The Warner Archive has been developing a reputation for turning out superb Blu-rays, and this is no exception.

Readers who are interested in purchasing it should go to the Warner Archive website to order it.

It will be released in UK on April 27 by Studio Canal with the restoration done by them in collaboration with the BFI's Unlocking British Film Heritage project. At 22 pounds before shipping the cost on Blu Ray is a little high there.

I am intrigued to find out whether the British Blu will be significantly different in picture quality. There doesn't appear to be any indication that Warner Archive have used a fresher master than the one that they utilised for their 2009 DVD. Whereas Studio Canal/BFI last year co-funded a 4K scan/2K restoration of the original negs, overseen by the cinematographer Nicolas Roeg.
How much more sublime can it get?

moviepas said:
It will be released in UK on April 27 by Studio Canal with the restoration done by them in collaboration with the BFI's Unlocking British Film Heritage project. At 22 pounds before shipping the cost on Blu Ray is a little high there.
Click to expand...

Amazon.uk is now saying that the release date is June 1. The price is nearly twice that of the Warner Archive Blu-ray, $32 and change at the current exchange rate, but it may come down.

Thanks for the review, Rich. I've always been fond of the works of Thomas Hardy, primarily because my late grandfather was a dedicated fan. He moved to Yeovil (borders Dorset County,) in 1990 I believe to support his research into Thomas Hardy (where he found work as a researcher for a television station.)


I read Hardy's books and poetry from my grandfather's bookshelves (his poem, "The Going," is perhaps the greatest poem I have ever read,) and cannot read his work or see film or television adaptations of his writing without thinking fondly of my grandfather. So, for that reason alone I will be picking this up.


But your superb review helps

Do you suppose Thomas Hardy committed words to paper the way he did because his spoken words were so hard for people to understand?!? 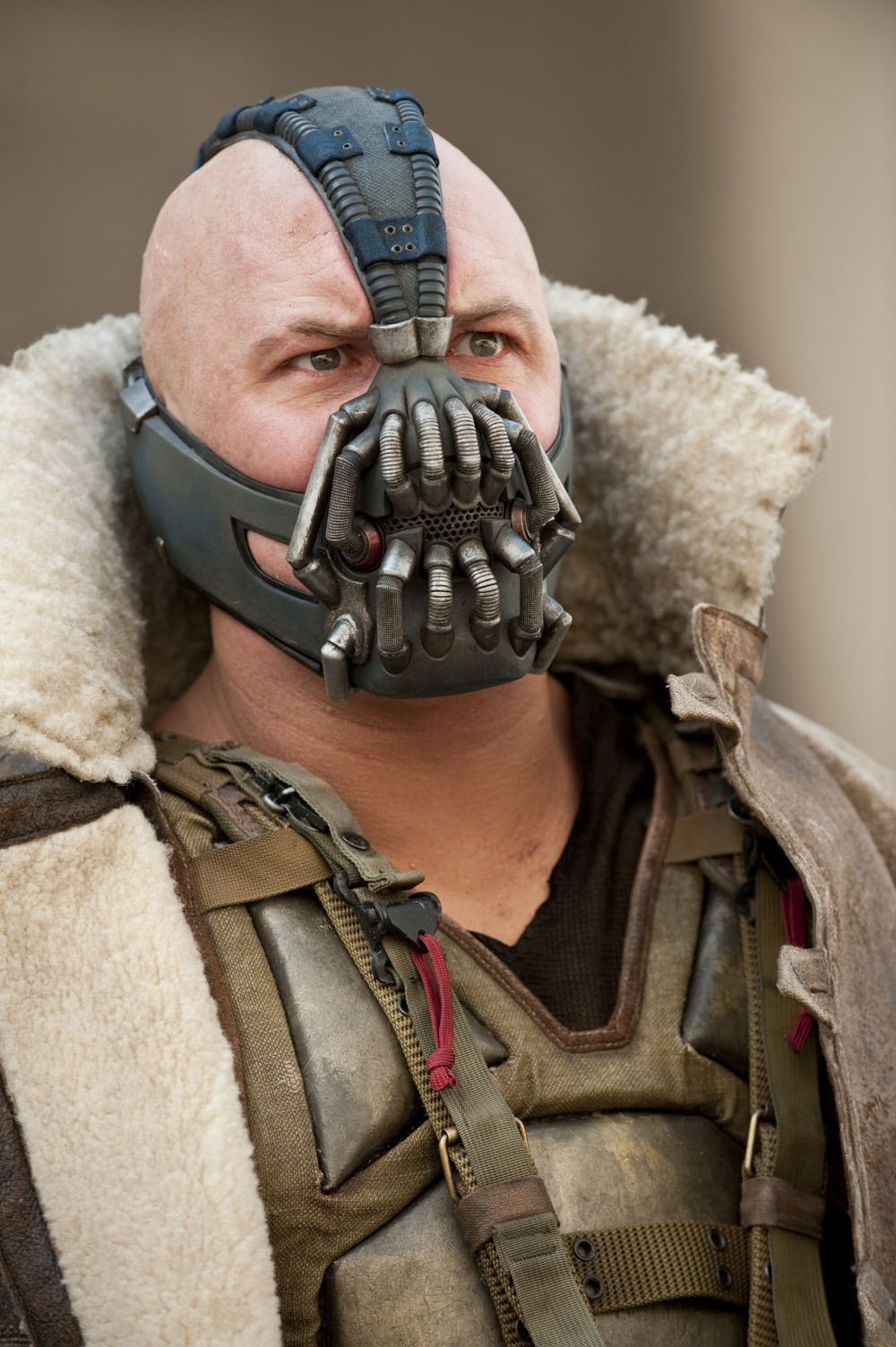 Seriously, though...thanks for the review, Rich. When I heard this was coming from the Archive, I was intrigued. I have heard of the title all my life but have never seen any part of the film. Sounds like it might be just the thing for my wife and I to take in on a cold winter's evening.

Unfortunately, I'm still waiting on my preorder to ship from Amazon.

I was surprised to see that it is listed as temporarily out of stock at Amazon.

My pre-order hasn't shipped either. I'm tempted to cancel and go for the Roeg-supervised UK version.

I have stock in the UK £21 delivered
T

I'd personally wait for the UK disc if you have the option of playing it. Warner's source used has faded colors and I'm wagering a properly restored scan is going to best this disc. It's very good -- but it could be better.


The other element is the sound -- I did not hear much, if any, "directionality" in the audio. It seems to be a flat mono track mixed in 5.1. Even the opening Overture sounds scratchy and pinched -- and it's definitely not in stereo. Is the audio going to be restored as well for the UK release?
C

So did mine. I was thoroughly impressed with the presentation and I am very grateful to have this film in my Blu-ray library.

I canceled my Amazon order of this and ordered the British version from the UK. I guess it's actually a good thing that my order didn't ship. If I'd received this Warner Archive version I doubt I would have ordered the UK version.

Whew! A few times the past year, I nearly pulled the trigger for the DVD. Patience paid off for the bluray. It's been ordered from Warner.
C

gruagach said:
Whew! A few times the past year, I nearly pulled the trigger for the DVD. Patience paid off for the bluray. It's been ordered from Warner.
Click to expand...

You won't regret it. The disc is gorgeous.

Comparison of Blu-ray to DVD

If you're thinking about getting this and haven't yet, hold out for the UK restoration. The MGM release is a bit washed out and you can just tell it could look a lot richer. It's okay, but you just know the restoration version will be a lot better.
C

CULTMAN1 said:
The UK release has been put back to June 1 and May fet shunted again
The WB Archive is first class great picture and sound
Click to expand...

Agree the Warner release is first class all the way,
You must log in or register to reply here.