There is less the feel of an epic and more a feel of immediacy in Thomas Vinterberg's 2015 version of Thomas Hardy's Far from the Madding Crowd, even if the action does take place in 19th century western England. Camerawork, staging, performances, and locations all join forces to make this, like the most entertaining 2005 remake of Pride and Prejudice, a fine if truncated version of a classic novel, but not everyone is going to find this abbreviated adaptation to their liking. 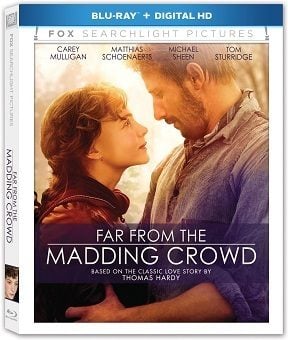 Strong willed and independent Bathsheba Everdene (Carey Mulligan) turns down a marriage proposal from neighboring sheepherder Gabriel Oak (Matthias Schoenaerts) not wishing to become a man’s property or willing to give up her freedom for wifely duties at such a young age. Soon afterwards, their roles change when Bathsheba inherits a nice farm from her deceased uncle and Oak catastrophically loses his herd in a freak accident. He comes to work for Bathsheba as her bailiff supervising her farm with a sure hand, but his lower station prevents him from pursuing her again as a wife. Her new neighbor William Boldwood (Michael Sheen) admires Bathsheba’s tenacity but having nursed an earlier broken heart is hesitant to try to combine their two farms via marriage. Then Bathsheba meets cocky, magnetic Sergeant Francis Troy (Tom Sturridge), himself having been left at the altar, and his looks and manner sweep her off her feet, and the two are married. But married life isn’t at all what Bathsheba expected it to be nor is her husband at all what he had seemed on the surface plunging her into despair and the other men in her life being rather helpless to do anything to alleviate her dilemma.

David Nicholls’s screenplay has boiled down Thomas Hardy’s classic melodrama to its essentials, but he’s basically given us a scenario of climaxes with the film lurching from one significant exploit to the next with little in between for establishing clear motivations. What’s missing, unfortunately, are the juicy guts of the piece: any sweeping sense of time or place that would enrich the characterizations as folk bound to this time and region (the wedding feast and a Christmas party are about it). Much of the humor has gone as well (there’s a delightful moment when Bathsheba jumps into a pond to wash her sheep right along with her workers, but there are few character-inclusive moments like this) along with making some of the secondary characters like the pitiable Fanny Robbin (Juno Temple), the pregnant fiancé who left Troy waiting in the church, or Bathsheba’s delightful girl Friday Liddy (Jessica Barden) little more than cameo performers. The western area of England utilized for location filming is certainly striking, and director Thomas Vinterberg gets some breathtaking shots of the fields being tended and the sheep grazing that does a great deal to show that Bathsheba is no prima donna but a working woman doing all she can to make her farm profitable. The writing and performances, however, don’t do a convincing job trying to persuade us that a sensible and determined girl like our heroine would succumb to the unctuous charms of such a strutting, empty peacock as Troy especially with the ever-reliable and infinitely more appealing Gabriel always at the ready. In fact, some viewers will likely be antsy at the prospect of waiting almost two hours to see unfold something that’s rather obvious in the film’s first five minutes (much more obvious than the tangled, psychologically more complex love-hate relationship between Elizabeth and Darcy in Pride and Prejudice).

Carey Mulligan is plucky and full of fight for much of the film though her descent into self-pity and helplessness at the hands of her abusive husband seems out of character for the woman she had shown herself to be earlier regardless of the expected behavior of women of that era. Matthias Schoenaerts has charisma to spare as Gabriel Oak, a good thing, too, since he has less to say during the film than any of the other major characters. Michael Sheen gives a solid and effective performance as the middle-aged William Boldwood though he misses perhaps that last little bit of poignancy which someone like Alan Rickman brought to a similar character in Sense and Sensibility. Tom Sturridge is handsomely cagey as the preening but malevolent Francis Troy, but the strong sense of sexual allure seems missing which would be the only reason someone as sensible as Bathsheba would have been bewitched by this foxy villain. Jessica Barden is delightful as Liddy whenever she gets to be the center of attention.

The film’s 2.40:1 theatrical aspect ratio is faithfully maintained in this 1080p transfer using the AVC codec. Sharpness is top of the heap (though one might spot some slight sharpening on occasion), all the better to enjoy the period costumes and beautiful layout of the western countryside of England. Color is nicely controlled and vivid when it needs to be (Troy’s bright red and gold uniform blazes forth without any blooming) with accurate skin tones. Contrast has been consistently maintained, and black levels vary only from very good to quite terrific. The movie has been divided into 32 chapters.

The DTS-HD Master Audio 5.1 mix offers a beautifully rich and full audio encode. Dialogue has been superbly recorded and has been placed in the center channel. Craig Armstrong’s background score gets a full sweep into the front and rear soundstages. Split effects make for interesting immersive audio throughout. A horrific storm which springs up from nowhere includes a crack of thunder that will lift one out of his seat.

Deleted Scenes/Alternate Ending (17:54, HD): eight scenes plus the alternate ending may be watched together in montage or selected separately from the menu.

The Suitors (3:56, HD): the three actors who play Bathsheba’s suitors each comment on their characters, and they’re joined by comments from director Thomas Vinterberg, producers Allon Reich and Andrew Macdonald, and star Carey Mulligan.

The Look of Far From the Madding Crowd (5:08, HD): the period wardrobe and west England locations are discussed by costume designer Janet Patterson and her assistant, the film’s makeup designer, director Thomas Vinterberg, and actors Carey Mulligan and Juno Temple.

William Boldwood (2:34, HD): Michael Sheen and Carey Mulligan describe his character and then is praised by director Thomas Vinterberg and producers Andrew Macdonald, and Allon Reich.

Thomas Vinterberg (4:07, HD): the actors and producers lay high praise on the head of their director who without reading the book or seeing the 1967 film version knew what he wanted to bring to the project and, in their opinions, wildly succeeded.

Gallery (HD): twenty-nine behind-the-scenes color shots which the viewer can step through.

A handsome if somewhat superficial adaptation of Thomas Hardy’s Far from the Madding Crowd, the film looks beautiful and offers an easy-to-follow condensation of the dense Victorian novel. The Blu-ray offers beautiful picture and impressive sound for fans of the movie or genre.

For me, nothing can touch John Schlesinger's 1968 masterpiece costarring Terrance Stamp, Julie Christie, Alan Bates and Peter Finch. It's pretty hard, if not impossible to top the cast, and the '68 just has the sweep and stark pageantry of Thomas Hardy's England that the remake seems to lack in spades.


Your quote "David Nicholls’s screenplay has boiled down Thomas Hardy’s classic melodrama to its essentials, but he’s basically given us a scenario of climaxes with the film lurching from one significant exploit to the next with little in between for establishing clear motivations" says it all. Today's film makers have forgotten that story-telling is a series of events building to a crescendo, not a series of crescendos built into a frenzied climax. What I love about the '68 is that it takes its time to evolve and develop every character's motivation. There's nothing of that in the remake, just a lot of superfluous noise, or as Shakespeare might have coined "...a tale told by an idiot, full of sound and fury...signifying nothing!"

There's nothing particularly thunderous or heavy breathing or idiotic about the new version, it's just more concise, and is a lovely film that, like the Schlesinger, found too few audiences at the boxoffice.

Watching this again now. I like it a lot. I like the version from the 1960s a lot too.

The 1968 film has more of 'everything' as it is too long. This newer shorter version is more concise and much better. Everything about it is top notch.
You must log in or register to reply here.