Richard Fleischer’s sci-fi trip through the human body Fantastic Voyage was a marvel in its day with its state of the art special effects (which won an Academy Award). Seen today, the effects that were so difficult to achieve then show their age, and yet their quaintness is part now of the film’s charms. It’s not really a great adventure, and the acting is rudimentary at best, but the representations of various parts of a human’s insides remain a novel viewing experience. 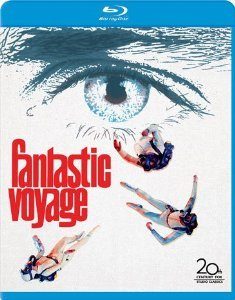 When defecting scientist Dr Jan Benes (Jean Del Val) is attacked by spies and suffers a brain clot that’s too delicate for a traditional brain operation, a group of five people are miniaturized, injected into the man’s body, and undergo a hazardous journey through his bloodstream in order to get to his brain and use a new laser gun to perform the careful surgery that will revive the doctor. Two doctors: Duval (Arthur Kennedy) and Michaels (Donald Pleasence), their assistant (Raquel Welch), the navigator (William Redfield) of the miniaturized ship, and the radio technician (Stephen Boyd) make up the team. But one of the five is a mole sent to sabotage the mission and thus kill the doctor before he can reveal any secrets to the Americans.Director Richard Fleischer, who had plenty of experience directing widescreen adventures (he directed 20,000 Leagues Under the Sea), uses his widescreen canvas to utmost advantage not only in showing off the various “universes” of the body that the crew sails through but also in simple set-ups like the group being briefed on their mission where all of the major characters sitting around a table stretch interestingly from edge to edge so we can see all of their reactions to their incredible soon-to-be journey. The Oscar-winning production designers have really outdone themselves in the imaginative picturization of the lungs, the cardiovascular cavity, and the inner ear (after these marvels, the climactic brain sequence seems almost a letdown after what has come before), all of them necessary due to the ongoing efforts of sabotage (air tank leaks, the surgical laser disabled, attacks by antibodies and white corpuscles) which continually drive them to seek alternate routes to the brain. And like High Noon, the movie takes place basically in real time. The movie spends forty minutes on the briefing, the ship prep, and the shrinking of the vessel and its passengers, and since the miniature effects wear off in an hour, that’s the amount of time the team has to accomplish their mission before the movie’s running time expires. This gives an edge to the adventures that Fleischer helms wonderfully. Yes, there are plot holes (we never see how those white corpuscles burrow beneath a glass dome to get to their victim), and there isn’t much mystery to who the saboteur is (early on when one character tells Boyd’s Giani that a certain character’s loyalty is beyond question, it’s a sure sign that we’re being directed toward the guilty party). Additionally, it’s quite obvious that there’s a great hurry to get Raquel Welch out of her bulky coveralls and into her skintight white diving suit (there doesn’t seem much of a reason otherwise for her to be there). But the movie’s imaginative portrayal of a beating heart or a breathing, filtering lung is certainly worth watching even when compared with today’s ultra-sophisticated CGI effects which can make anything seem real.Stephen Boyd gets top billing as the film’s nominal hero, and he’s fine in the fish-out-of-water role, but there is actually more focus on Arthur Kennedy’s gruff surgeon and Donald Pleasence’s claustrophobic mission commander. Longtime character actors Edmond O'Brien (as General Carter) and Arthur O'Connell (as Colonel Reid) are pretty much wasted here as they sit around smoking cigars and drinking coffee full-sized while the miniaturized others do the heavy lifting. But this live action cartoon (the movie actually spawned an animated series after its success) doesn’t really need heavy dramatics: the production design and the special effects are the film’s big draw (along with Miss Welch’s cleavage, of course).

The film’s Cinemascope aspect ratio of 2.35:1 is faithfully reproduced in this 1080p transfer using the AVC codec. At its best, the sharpness is solid (solid enough to allow viewers to see matte lines throughout) and the color reproduction is first-rate, but due to the limitations of the time with the need to hide wires and disguise some of the effects work, portions of the film in the second half especially are soft focused and lacking fine detail. It’s not the fault of the transfer, of course, but it makes for an inconsistent visual experience. Flesh tones sometimes look more natural than at other times when they seem a bit too brown. Black levels can be nicely inky but again are inconsistently reproduced. There are no age-related artifacts present, however. The film has been divided into 24 chapters.

The disc offers DTS-HD Master Audio 1.0 and 5.1 sound mixes. The surround mix doesn’t really do much with the rear channels, but there is marvelous spread across the fronts with the sound effects and Leonard Rosenman’s sometimes lush score that give the listening experience some heft. The mono mix is clean and likely represents the listening experience that most moviegoers had in 1966, but the more opened up 5.1 mix offers a more enjoyable ride. Kudos to Fox for offering both in lossless audio.

Audio Commentaries: Film and music historian Jeff Bond offers a fine analytical discussion of the film’s merits on his solo track. On the isolated score track, he and fellow historians Jon Burlingame and Nick Redman offer a thirty-five minute discussion of Leonard Rosenman’s score along with talk of other notable screen composers of the era and the Fox music department then headed by Lionel Newman. All are worthy audio tracks.Isolated Score Track: Leonard Rosenman’s score is offered in Dolby Digital 2.0 stereo.Lava Lamps and Celluloid (17:40, SD): two special effects specialists offer complimentary (and complementary) views on the Oscar-winning special effects of Art Cruickshank which are featured in the film.Storyboard-to-Scene Comparison (2:22, SD): the viewer is able to toggle between the storyboards and the finished version of the whirlpool scene (and have them both appear in split screen).Promotional Materials (13:07, SD): the theatrical trailer, a feature promo reel, and two TV spots are offered in montage form. They may also be watched individually.

Fantastic Voyage is still an amusing science fiction yarn almost half a century after its original release, and the Blu-ray transfer of the film offers its best-ever home video release even if difficulties with the original production must of necessity be carried over into today’s high definition world.

Its great to see this released on Blu-ray. Fox is going to make for an expensive 4th quarter....

I concur. This is an exceptional film -- one I have seen many times during
my childhood and adult years. So happy to see that it has finally been released
to Blu and that it looks great. Looking forward to my copy.

This release and Violent Saturday from Carlotta (France) has been a good year for those of us who are fans of Richard Fleischer's work. As well as 20,000 Leagues I would really like The Narrow Margin and Armored Car Robbery in 2014.

Fantastic Voyage has been a favorite since I saw it in its opening week at the Gateway (in my avatar). Whatever its weaknesses, story-wise, effects-wise, or any other -wise, I already love this BD in advance.

Screened this last night and it looks really, really good. Lots of nostalgia here for me. Along with The Andromeda Strain, Fantastic Voyage is one of my favorite "hard" science fiction films of the sixties. Thanks Fox!!!

Big improvement compared to DVD and extra info on all four sides.

Received this today based on your review. As I watch, it is everything you said it was. Thanks.
A

Has there been any talk of scanning Fantastic Voyage into 4k and cleaning up the effects digitally to get rid of the grain and shimmer the composite effects cause on the BluRay transfer? Is that feasible?

Matt Hough said:
the production design and the special effects are the film’s big draw (along with Miss Welch’s cleavage
Click to expand...

As the resident dirty ol’ man, I find it unsatisfying that Raquel never wore anything revealing than her wetsuit. Surely they could have also miniaturized a bikini?

Johnny Angell said:
As the resident dirty ol’ man, I find it unsatisfying that Raquel never wore anything revealing than her wetsuit. Surely they could have also miniaturized a bikini?