Wes Anderson, a unique voice in American cinema, chose to adapt Roald Dahl’s early work out of reverence for a book he read as a child. Dahl was himself a singular voice in children’s stories with a distinct wit and sensibility of a gifted writer from the United Kingdom (Dahl was born in Cardiff, Wales). At first glance, Anderson’s simply (but superbly) framed film technique and dabbling of deadpan family dysfunction might seem unsuited to what many would regard as a uniquely English story. But not so. 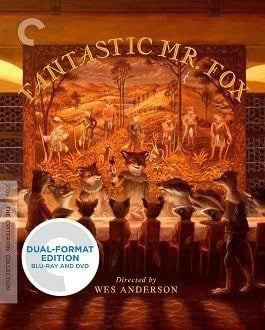 “Honey, I am seven fox years old. My father died at seven and a half. I don't want to live in a hole anymore, and I'm going to do something about it.”

Meet the Fantastic Mr. Fox, a sly, clever, handsome and well-dressed man about town who commits to marry Felicity when she becomes pregnant with their son. He must say goodbye to his expert bird stealing days, settle down to marital normalcy, and bottle his wilder instincts for the sake of family. It doesn’t last nearly as long as it needs to. Unhappy with their underground dwelling, Mr. Fox upgrades their domicile to a luxurious tree, upon a hill, within eyeshot of three successful – and heavily fortified – poultry farms. These farms, owned by the mean and malignant triumvirate of Bean, Boggis and Bunce, prove entirely too tempting for Mr. Fox, who despite offering a promise of forgoing the bird thief life for good, is lured by the challenge. Matters are complicated upon the arrival of the Fox’s nephew, Kristofferson, whose athletic skills cause jealousy and resentment in the son of the Fox’s, Ash. Life in the tree upon the hill is about to change for good.

Director Wes Anderson’s style, through the paradigm of the fine art of stop-motion animation, fits with fated perfection to Roald Dahl’s popular tale. Fantastic Mr. Fox is surprisingly faithful to Dahl’s early work, tinkering around the edges here and there and shrinking the fox family down to a single child and the nephew. The changes simplify the proceedings and help marry the story with this cinematic presentation. The lovable, delightfully wry story of understanding who we are and what’s important to us (and the fight to protect and preserve our family) is aided by a fine voice cast headlined by George Clooney as the titular character. Felicity Fox is given life by the talent of Meryl Streep who, along with Clooney, supplies her character with a droll evenness. Wes Anderson faithful Jason Schwartzman provides the voice for Ash Fox, the insecure and athletically challenges son of the Foxes. Willem Defoe delights as the antagonistic Rat, supplying a sly, uncharacteristically southern dialect to the capable menace. As Bean, Boggis and Bunce are the vocal skills of Michael Gambon, Robin Hurlestone and Hugo Guinness respectively. Each are perfect in their roles though the recognizable and accomplished gruff of Gambon stands out. The remaining voice cast are all highly effective, including Eric Anderson as the nimble and impressive nephew of the Foxes, Kristofferson Silverfox, Wally Wolodarsky as the simple possum, Kylie, and another Anderson faithful, Bill Murray, somewhat underused as Clive Badger, is terrific. And special note should be made of Jarvis Cocker as guitar strumming Petey.

Where Anderson’s work most succeeds is in its sublime script and the joyous embrace and celebration of stop-motion animation. With a lively sense of humor abundant with straight-faced delivery, exploration of themes rampant through Anderson’s work; of children rebelling and challenging; of characters trying to hold on to the façade of normalcy; of challenges overcome by belief that belies probability, and the inexorable inevitability of good and right winning out.

It’s a delightful and unexpectedly inventive film and brings a smiles to ones face with ease.

As the thick accompanying booklet explains, Fantastic Mr. Fox is presented in its original 1.85:1 aspect ratio. Shot with Nikon D3 digital cameras, affixed with Canon lenses, the entire production was completed in a fully digital workflow, producing a sublimely crisp image, replete with exquisite detail. Again, according to the materials supplied, the final color-corrected files were output to Rec. 709 high-definition color space for the Blu-ray and DVD release. The results are very, very good. Autumnal colors dominate every single frame, washing the supposed English countryside (rampant with critters holding North American accents, including some animals that hail from across the pond, like the opossum), creating a warm, rich, splendid tone.

The transfer was supervised by director Wes Anderson.

Choosing to animate at 12 frames per-second rather than the standard 24, calls attention to the stop-motion animated medium, creating a character from the approach, and the use to real animal hair impossible not to rustle as the animators hands patiently move the pieces and characters within the frame, give the film a raw, tacit nod to the audience.

A delightful array of special features have been included by Criterion for this dual format release including an endearing audio commentary by the director. Making-of materials are equally fascinating providing a look, though sometimes brief (relatively), at the production.

Other materials are of moderate wonder such as the included Sony Robots commercial and some of the more standard publicity features.

But there is quite a bit here to digest and the audio of Dahl reading his short story is quite the treat.

Storyboard animatics for the entire film

Footage of the actors voicing their characters, puppet construction, stop-motion setups, and the recording of the score

Interviews with cast and crew

Discussion and analysis of the film

DVD Version of the film

Wes Anderson’s comedy is quite unique in American cinema. A penchant for characters offering straight delivery, families rife with soft dysfunction, and an earnestness expressed by leads all come together with a fanciful whimsy that is impossible not to be carried away by.

Director Wes Anderson, who co-wrote the picture with the gifted Noah Baumbach (The Squid and the Whale, Francis Ha), crafts a beautiful animated tale, with dialogue that snaps with wit, boasting in confidence, filled with creative flair and bathed in the aesthetic equivalent of perpetual cinematic autumn. Fantastic Mr. Fox is exactly as the title describes.

One of the best films i have seen recently and a very funny one too. Have the dvd but this is a easy Criterion purchase.

I already have this movie, but this Criterion edition looks sweet. I might pick up this edition. How does the transfer compare to the original release? Anyone know?

FWIW, DVD Beaver says it's hard to tell the difference.

Thanks muchly. Looks like this is a buy mostly for the extras. Not sure I want to pay Criterion's prices for an extras disc, I'll have to think about it. I agree with Gary Tooze on one point. This is a fantastic film that only gets better with every viewing.

This review convinced me to purchase. (I was on the fence.)

As much as I would love the Criterion release of this, Amazon is currently selling the 3-Disc version for $8.99.


Comments in this thread convinced me it would be impossible to tell the difference in video quality between either.


I ordered it and look forward to seeing this film for the first time.