Eyes Without a Face Blu-ray Review

Call it a horror film; call it “cinema fantastique”: Georges Franju’s Eyes Without a Face is one creepy piece of goods. It takes the mad scientist trope and approaches it from a completely different angle resulting in a film that’s both chilling and poignant almost at the same time. Only the best fright films can make that claim, and this one definitely is a one-of-a-kind achievement. 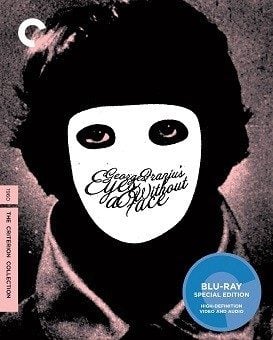 With his daughter Christiane’s (Edith Scob) face burned off in an accident he caused, Professor Genessier (Pierre Brasseur) is determined to take a face from a living girl and graft it onto his daughter’s face (a process known as “heterografting”). Previous attempts have failed and his daughter is forced to wear a mask which hides the agony and apprehension she’s enduring. Genessier’s companion Louise (Alida Valli) finds the local girls whose faces best match Christiane’s features, and the latest one is Edna (Juliette Mayniel). Genessier’s new idea is to take the entire face in one piece rather than in smaller sections, and he assures Christiane that his next operation will be successful. Meanwhile the local police inspector (Alexandre Rignault) is alarmed by the succession of girls who have gone missing in recent months and starts his own investigation.A number of hands are responsible for the screenplay: Jean Redon, Claude Sautet, Pierre Boileau, Thomas Narcejac, and Pierre Gascar (and undoubtedly director Georges Franju likely had a hand in it, too), and yet the film is of a piece, its moody sense of desperation and chilling atmosphere of melancholy solitude weighing heavily on the proceedings. Not only that, but Professor Genessier has a kennel of oversized, vicious dogs in his basement which he uses for skin graft experiments, and the constant yowling of these canines adds another layer of unsettling tension to the film’s already heavily loaded ambiance. Though an American movie like Psycho used quick cutting and brilliant montage to suggest its moments of violence, the major horrific sequence in this French film is done in long, vivid takes as the doctor slices off a woman’s face before our very eyes. The use of black and white takes the gore during that grafting scene from the realistic realm and places it into our imaginations (where it’s infinitely more gruesome – Hitchcock had the same idea in Psycho), and later director Franju cleverly uses a montage of stills to show us the patient’s condition over the succeeding days. But while this sequence and its aftermath are undoubtedly the film’s centerpiece, there are many other moments that give the film its oddball flavor: an introductory body dump in a river, Christiane’s wandering around the mansion in her eerie blank-faced mask while Maurice Jarre’s effectively brittle score jars and jostles on the soundtrack and visiting that foreboding kennel (which also houses a small aviary of doves who symbolically figure into the film’s climax) while calming the unsettled creatures with her obvious, empathetic sensitivities to their entrapment, a beyond creepy night visit to a cemetery with the latest dead body/failed experiment. And yet Franju’s pace is remarkably calm and measured. Nothing here is rushed or forced.And that goes for the performances which are wonderfully controlled throughout. Pierre Brasseur’s mad scientist is the antithesis of the cackling crackpot: he’s completely at ease as he moves through the film either dealing with his daughter’s fears or his own hopes for his experiments. Alida Valli gives a much more emotional performance here than we ever saw in her English language pictures like The Paradine Case or The Third Man, and the emotions that cross her face during her final confrontation with Christiane speak volumes for the character and for Valli as an accomplished actress. Edith Scob achieves as much of her performance through pantomime as she does though emoting, and she’s very effective doing both. Francois Guerin as Christiane’s former boy friend and Alexandre Rignault as the police detective both register strongly in smaller roles.

The film’s 1.66:1 original theatrical aspect ratio is delivered in a faithful 1080p transfer using the AVC codec. Taken from the camera negative, the picture offers very pleasing sharpness (with only the occasional soft shot not done deliberately) and a striking grayscale that offers excellent black levels and impressive shadow detail (much of the film takes place at night). Any age-related problems with the film have been handled astutely, and the transfer has an engaging film-like presence. The white subtitles are always easy to read. The film has been divided into 20 chapters.

The PCM 1.0 (1.1 Mbps) soundtrack mixes dialogue, Maurice Jarre’s unusual score, and sound effects in a typical mono mix of its era. Post synch work is very noticeable when it occurs, but engineers have done a fine job cleaning up the fairly ancient elements and delivering a problem-free uncompressed sound mix.

Blood of the Beasts (22:08, HD): Georges Franju’s first film, a 1949 documentary short detailing the work of French slaughterhouses. Not for the squeamish, the film shows in graphic detail actual slaughters of a horse, some cattle, and sheep noting what various parts of their bodies will be used for.Georges Franju Interview (2:57, HD): the director comments briefly on his first film and why he focused on the graphic elements of the work.Edith Scob Interview (8:39, HD): a 2013 interview in which the actress recalls working on the movie and how she got cast for the part.Le fantastique excerpt (5:31, HD): the director is interviewed on a French television program about Eyes Without a Face as he explains how it’s not meant to be taken as a horror film.Pierre Boileau-Thomas Narcejac Interview (7:10, HD): the two writers discuss separately their thirty-four year partnership and detail their working methods and the kinds of stories that appeal to them.Theatrical Trailers (3:45, 3:25, HD): the French theatrical trailer and the U.S. trailer which changed the name of the film and paired it in a double feature with The Manster.20-Page Booklet: contains the cast and crew lists, a couple of stills from the movie, and two essays on the film and its director’s career by author Patrick McGrath and film historian David Kalat.Timeline: can be pulled up from the menu or by pushing the red button on the remote. It shows you your progress on the disc and the title of the chapter you’re now in. Additionally, two other buttons on the remote can place or remove bookmarks if you decide to stop viewing before reaching the end of the film or want to mark specific places for later reference.

One of the moodiest and most unusual suspense movies you’re likely to see during this Halloween season, Georges Franju’s Eyes Without a Face comes highly recommended.

This movie is just plain good.If you aren't used to this type of movie, You won't sleep well for a week.

One of my all time favorite films - Edith Scob is amazing. I've had the French Blu-ray for about a year and a half now - a wonderful transfer, which I assume is the basis for the Criterion - the French had no subtitles, though, so can't wait to get my little hands on this one.

Love this film and can't wait till my copy is delivered.

Never bought the DVD so this Blu will be mine on the next sale!

Does anybody know if Redon's book has been translated to English?Using my phone is getting me nowhere on this search.

I don't think the book was ever translated. I have the first edition in French.
You must log in or register to reply here.

Friday at 8:26 AM
Ronald Epstein