A more humanistic and less piously reverential retelling of the Moses story, Ridley Scott’s Exodus: Gods and Kings is a most professional piece of work with fine performances, a big budget production that doesn’t scream money from its every crevice, and while long doesn’t particularly drag in relating its narrative. The problem, however, is that the story is overly familiar and while much less candy-colored and campy than Cecil B. DeMille’s The Ten Commandments, doesn’t really present a compelling case for itself for its need to exist. The filmmaking is fine, but one wishes the $140 million budget might have been used for something fresher and more interesting. 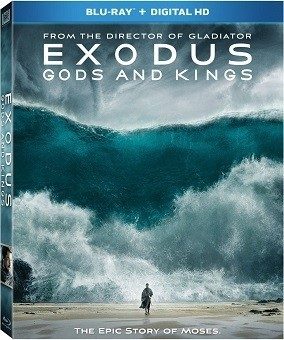 The young adult Moses (Christian Bale) who has been the right hand man for Egyptian heir apparent Ramses (Joel Edgerton) learns while on a fact-finding mission for his godfather Pharaoh Seti (John Turturro) that he is in fact a Hebrew and not an Egyptian. After Seti’s death, Ramses is informed by Viceroy Hegep (Ben Mendelsohn) of Moses’ heritage, and since Ramses has feared that Moses’ popularity and bravery might somehow lift him into the Pharaoh’s chair, he’s exiled into the wilderness and later even set upon by assassins. Eventually Moses comes upon Midian where he meets and marries Zipporah (Maria Valverde), sires a son, and tends to his flocks for nine years. But an encounter with God in the form of a guardian angel named Malak (Isaac Andrews) gives him another purpose and sends him back to Ramses demanding that the hundreds of thousands of Hebrew slaves be released. When Ramses stubbornly refuses, God decides to take matters into his own hands to change the ornery ruler’s mind.

The script composed in part by Adam Cooper, Bill Collage, Jeffrey Caine, and Steven Zaillian offers throughout a reasonable and defiantly non-melodramatic approach to the Moses story, and in our modern era, it’s a reasonable and workmanlike style for the material. Director Ridley Scott certainly gives this tale an epic sweep from the initial battle between the Egyptians and the Hittites all the way through the ten plagues of Egypt (even DeMille didn’t bother showing this many of the ten) and the crossing of the Red Sea with modern-day CGI effects making very realistic representations of the blood-red Nile, the frogs, flies, boils, bestial pestilences, fiery hail, locusts, unending darkness, and the death of Egyptian first borns. Just as DeMille triumphed with his procession out of Egypt with a wide panoramic shot of the multitudes, so, too, does Scott convey the same amount of mass with a grand scope and scale, and the Red Sea sequence is no less impressive though slightly less religiously majestic, a key difference between the two versions that can be glimpsed all the way through this telling. On the other hand, losing the melodrama has also lessened the number of really interesting persons who are a part of the story, and that loss means that motivations for decisions throughout get somewhat of a short shrift (for example, in The Ten Commandments, we’re shown why Ramses changes his mind and goes after the Jews after allowing the slaves to leave, but in this film, he simply does it without any prodding from an angry and jealous Nefertari (Golshifteh Farahani)). Despite its two-and-a-half hour running time, key pieces of character development do seem to be missing. (Allegedly, the rough cut ran four hours.)

Christian Bale is a solid and grounded Moses (even if his accent seems uncertain throughout) with the script emphasizing his frequent mistrust of God and his bafflement at some decisions that are being made and which he must carry out. Joel Edgerton as Ramses is no hissing villain but rather a man who wants power but isn’t entirely sure he’s worthy of it. Ben Mendelsohn makes for a splendidly smarmy Viceroy who comes to loathe Moses after he’s chastised for living on too grand a scale. Ben Kingsley is simple and honest as Nun, the Hebrew who reveals Moses’ past to him while Aaron Paul gains in stature as Joshua as the film runs. Sigourney Weaver is rather wasted as the calculating Tuya, mother of Ramses, but María Valverde stands her ground as Moses’ steadfast wife Zipporah. Isaac Andrews is an interesting choice as Malak, God’s representation on Earth, with this version of God possessing almost childish petulance and retribution seen throughout the telling once he makes his first appearance.

The film’s 2.40:1 theatrical aspect ratio is faithfully preserved in this 1080p transfer using the AVC codec. Sharpness is quite revealing of detail throughout the presentation with hair textures, clothes, and facial features easily discernible and with CGI effects so well done that they can withstand close-up examination. Color is rather warm throughout with hues deftly controlled and skin tones tanned. Black levels are superb, and contrast has been consistently applied to bring forth a very immersive and appealing picture. The movie has been divided into 40 chapters.

The film played engagements in 3D, and there is a 3D version of the movie available in a Blu-ray pack with another separate disc of bonus features. On the reviewed disc here, the deleted scenes are offered with a 3D option which gives some idea what the feature would have been like in 3D offering greater depth and scope.

The DTS-HD Master Audio 7.1 sound mix doesn’t stint one bit on the split effects which make full use of all available channels and which feature panning across and through the soundstage most prominently in battle scenes and crowd-laced encounters. Bass can be thundering on occasion and especially prominent during the booming Red Sea climax near film’s end. Dialogue has been expertly recorded and has been placed in the center channel. Alberto Iglesias energetic score has been given a symphonic spread through the fronts and rears.

Audio Commentary: director Ridley Scott and co-screenwriter Jeffrey Caine have each contributed comments which have been edited together into a commentary track. Scott concentrates on production details especially describing where things were shot, which parts are real and which are green screen, and commenting on working with various cast members. Caine offers contrasts to other cinematic interpretations of the story and describes how events described in The Bible and other religious tracts have been adapted for dramatic purposes.

The Exodus Historical Guide: a pop-up window of real-life history which may be selected from the menu and which makes a marvelous touchstone for the biblical interpretation of the story and the historical one.

Deleted/Extended Scenes (14:57, HD/3D): nine scenes which may be chosen individually or watched in montage. The disc also offers these scenes in either 2D or 3D.

A dramatically controlled and moderately engrossing telling of the Moses story, Exodus: Gods and Kings offers good acting and outstanding production to a tale that’s been told over and over again. Reference video and audio certainly make this new version easy to watch and enjoy, but there’s nothing tremendously compelling about this rendition, and some may even feel that this version isn’t reverential enough though its lack of overriding piety may actually open up a new audience willing to take a chance on it.