A brilliantly conceived sci-fi cat-and-mouse thriller (though the identities of the cat and mice are always in question), Alex Garland’s Ex Machina will keep you guessing until its very surprising conclusion. Made on a low budget but looking like a billion dollars, this film puts many science fiction epics to shame with its beautifully plotted and characterized scenario and its unique look and sound. This is one of the best films of 2015. 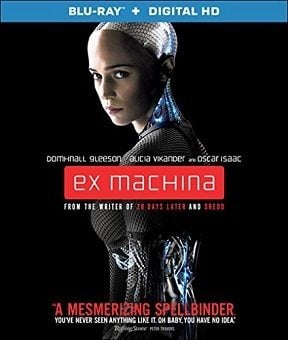 Thrilled to have won a week-long audience with his tech billionaire boss (Oscar Isaac), high level programmer Caleb (Domhnall Gleeson) learns upon arriving at a reclusive, palatial estate built underground in Alaska that the week won’t actually be a carefree vacation but rather a chance for the boss to present to him his latest invention, an artificial intelligence android which he wants Caleb to put through the Turing Test to see if this model meets every specification its inventor had programmed for it. Caleb is thunderstruck by the highly advanced nature of the android named Ava (Alicia Vikander), and as they spend the week together, Caleb begins to undergo a transformation of his own, wondering if perhaps something else is going on here besides his conducting this test on the robot.

Writer-director Alex Garland has written a dense screenplay with multiple levels of discovery keeping the viewer (as well as Caleb) off balance and uncertain almost from the moment of his arrival so that each new revelation when it comes makes one regroup his original thoughts and reset until the next set of surprises occurs. Trust issues are paramount all around (though it does seem rather naïve of Caleb not to imagine that his host would have every square inch of his lair wired for surveillance making any moves he’d make on his own easily and obviously seen), and the game of one-upmanship is similar in tone to the mind games played in Sleuth except that there are more than two players in this game, something that none of the players need ever to forget. Garland’s snooping camera darts around the modern dwelling quite stealthily watching various characters as they proceed through their own agendas (though what we see isn’t always what’s actually happening, something one must always keep in mind while watching the twisty narrative unfold), and when we go outside for a few key moments (and what a great delight it is to escape for a bit from that claustrophobic glass enclosed cage no matter how high tech it is), the landscapes are simply astonishing (exteriors were filmed in Norway). The CG work to create the robotic shell in which Ava lives is also revelatory: so fascinating that you’ll be poised to pause occasionally just to look at its inner workings. It’s truly amazing that this beautiful and sophisticated looking film was allegedly made for $13 million.

The three key players are all terrific, playing their roles by keeping their cards close to their chests while appearing to be completely open and above board. Oscar Isaac’s cocky, somewhat bullying Nathan, Domhnall Gleeson’s sensitive, cerebral Caleb, and Alicia Vikander’s quietly imploring Ava all work sensationally well together and apart and all earn a rooting interest from the viewer for one moment or another (though by the time we get to the end, one may feel torn about his loyalties despite the ending, another sure sign of a brilliant screenplay leaving the viewer in an ambiguous frame of mind). As Nathan’s mute Japanese servant Kyoko, Sonoya Mizuno is also quite expressive despite not saying anything during the film and the disco dance she does with her boss is unfortunately way too short, among the most delightfully unexpected light-hearted moments in a movie that’s otherwise anything but.

The film has been framed at its theatrical 2.40:1 aspect ratio and is presented in 1080p using the AVC codec. Sharpness is the main problem here, occasionally razor-edged and filled with detail and oftentimes softer and gauzier in appearance even in scenes where it doesn’t make sense for there to be such softness. Color is strong and nicely controlled with believable skin tones. Black levels are good, but contrast varies sometimes to the detriment of detail. The movie has been divided into 16 chapters.

The DTS:X audio mix was decoded into DTS-HD Master Audio 7.1 for my system (there is also a DTS-HD Master Audio 5.1 mix available for choosing). For moments where split effects are necessary (a helicopter landing and taking off, for example), the track is wonderfully expressive with effective panning through the soundstage and masterful use of bass throughout. Dialogue has been well recorded and has been placed mostly in the center channel with just a bit of directionalized dialogue. The jolting score by Ben Salisbury and Geoff Barrow gets an effective spread through the fronts and rears.

Through the Looking Glass: Creating Ex Machina (39:59, HD): cast and key members of the production team cover all of the basics of the production from its original narrative structure through the casting process, its unusual production design, the costumes, and the special effects which bring the android to life. Among those speaking are writer-director Alex Garland, producers Andrew McDonald and Allon Reich, production designer Mark Rigby, director of photography Rob Hardy, costume designer Sammy Sheldon Differ, special effects supervisor Andrew Whitehurst, and stars Oscar Isaac, Domhnall Gleeson, Alicia Vikander, and Sonoya Mizuno.

SXSW Q&A (1:00:57, HD): a question and answer panel held at the SXSW Film Festival in 2015. Also included in the session is the presentation of the film’s theatrical trailer (which is otherwise not present on the disc).

Promotional Featurettes (28:40, HD): eight brief behind-the-scenes interviews (used for the production feature above) which cover the topics of Ava’s creation, appearance, and casting, the production design of Nathan’s lair, the new consciousness about artificial intelligence, the writer-director, casting the rest of the film, and Nathan’s God Complex.

Promo Trailers (HD): Maggie, Cut Bark, A Most Violent Year, Under the Skin.

A sci-fi delight with twists and turns that keep a viewer on his toes and on the edge of his seat and featuring wonderful production design that makes the utmost out of a small budget, Ex Machina is an underrated gem fully worthy of a rental or an outright purchase if the subject matter is of any interest. Recommended!

Absolutely LOVED this in the theater, can't wait to see it at home and share it with family and friends. Thanks for the awesome review!


PS, just ordered via the linky!

I missed this in the theater, but day one blind buy from either Target or Best Buy.


...and this is worthy of a blind purchase. I greatly enjoyed it.

The Spanish(haven't checked region A ability) BD has subs.

Will be picking this up Tuesday on my way home from work. Fantastic film (saw it in the theater about a week or so prior to Mad Max), and thrilled to already have the BD release coming out so soon. Can't wait to revisit.

A fantastic sci fi for me, Infact I rather want an an Ex Machina ...!

Thanks Matt. I missed it in the theater and already ordered it from Amazon.

I did a blind buy on this simply because I wanted to try a DTS:X sound track.

Really enjoyed it, and I found the sound design to be outstanding in a 5.1.4 setup with Dolby Enabled height channels.

As a PSA, it appears that the BR is currently only $4 at Best Buy.