Ernest Hemingway’s 1927 short story “The Killers” was made into one of the most stunning and individual films noir ever produced. Directed by Robert Siodmak in 1946, Ernest Hemingway’s The Killers has every attribute the French would later attribute to the noir genre: long, dark shadows inside a murky world of crime and deception, a treacherous femme fatale, rain soaked streets and neon lights garishly beaming down on an ugly world. The new Criterion Blu-ray release of this unmistakable classic has been combined with the 1964 made-for-TV (but released to theaters due to its violence) version directed by Don Siegel. Though it has its moments, it’s worlds away in quality compared to the original. 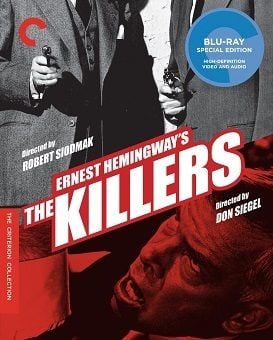 Two hit men (Charles McGraw, William Conrad) rub out a service station attendant known around town as “The Swede” (Burt Lancaster). Insurance company investigator Jim Reardon (Edmond O'Brien) investigates the crime wondering why the man who had been warned ahead of time of their imminent arrival had done nothing to prevent his murder, so he sets out on a lengthy investigation into the man’s past uncovering a $250,000 safe heist he had been a part of by interviewing a former girl friend (Virginia Christine), his former best friend now a cop (Sam Levene), his former cellmate (Vince Barnett), and others suspected of being part of the big robbery (Albert Dekker, Ava Gardner, Jeff Corey, Jack Lambert). Basically, Reardon is looking for the answer to two questions: who paid for the hit and where is the $250,000 that the Swede had absconded with?

Hemingway’s original story covered the film’s first quarter hour. The rest of the story involving the entire sad life of one-time boxer Ole “The Swede” Anderson was a concoction of screenwriter Anthony Veiller who earned an Oscar nomination for one of the most brilliant scripts of the era blending a splintered flashback structure with such surety and strength that following the progression of Swede’s life and loves is not only easy but completely engrossing aided in no small measure by the terrific Oscar-nominated direction by Robert Siodmak who moves the camera through sordid flophouses, a grimy prize ring, and even grand homes which reek of corruption. Burt Lancaster makes a stunning screen debut as the tortured, fatalistic Swede, and Ava Gardner as his lady love gives a riveting performance (one of her few films, she later said, of which she was proud). Edmond O'Brien is the viewer surrogate determined to get to the bottom of the mystery while devoted Sam Levene and oily Albert Dekker stand out in major supporting roles. But there isn’t a weak performance in the bunch from the truly threatening hit men of William Conrad and Charles McGraw to luckless small time crooks like Vince Barnett’s Charleston and Jeff Corey’s Blinky.

Two hitmen (Lee Marvin, Clu Gulager) find it very odd when a teacher for the blind Johnny North (John Cassavetes) doesn’t try to escape their shooting him and so begin to investigate him to possibly learn the reason why. They discover that he was at one time a champion race car driver in Miami, and after landing there, begin to grill all of the people with whom he was close four years earlier: his partner in the race car business Earl Sylvester (Claude Akins) and then three people with whom he allegedly stole a million dollars in a mail heist: Mickey Farmer (Norman Fell), former girl friend Sheila Farr (Angie Dickinson), and building contractor Jack Browning (Ronald Reagan). But where is the million dollars? No one seems to have a clue concerning its whereabouts.

Though the major narrative and character relationships from the original are still present in this adaptation by Gene L. Coon, there’s not a word of Hemingway present in the script, and the movie plays more as a bright, flashy crime drama than a brooding, fatalistic film noir. The relationship between the victim and the femme fatale is focused on much more in this version leaving character exploration for the other people in the story quite lacking, and since every character is a bad guy here (the insurance investigator character is not present), there’s no rooting interest. Don Siegel’s direction tries a couple of askance camera angles to add some mood, but as the film was originally made for television, close-ups reign supreme, and the film always has the feel of a studio-bound production making the movie seem smaller and less vital. As the two hitmen, Lee Marvin gives an effectively menacing performance countered by Clu Gulager’s health conscious psychopath, but the best performance in the film is offered by John Cassavetes whose cocky racer is brought down to earth by the film’s vixen Angie Dickinson playing an all too obvious woman on the make. The film’s final twist is repeated from the original movie, but it has far less impact here due to Ronald Reagan’s less than chilling performance as the film’s dapper villain.

Both films are presented in 1.33:1 with the AVC codec used to present a 1080p transfer. The 1946 version is one of the greats: a gorgeous, reference quality, artifact-free transfer that offers superb sharpness and a grayscale that presents the deep, inky blacks which are absolutely essential for proper film noir presentation. The 1964 color version has tons of head room (meaning it would have had no problem being framed for widescreen theatrical exhibition) but offers a clean, colorful transfer with rich skin tones and lots of detail in hair and facial features. Sometimes second unit work and stock footage is soft and doesn’t mix well with the rest of the original footage, but contrast is outstanding even if black levels are very good but seldom great. The original film has been divided into 21 chapters while the remake has 19 chapters.

Both films are presented with a PCM 1.0 (1.1 Mbps) sound mix. Neither offers the richest, widest-ranging fidelity (the 1964 version is stronger aurally), but both are more than adequate to support the sterling visuals. Dialogue, music, and sound effects have been mixed together with professional expertise with no compromises for any aspect of the presentation. There are also no age-related problems with hiss or crackle to mar the listening experience.

Each film has its own set of bonuses and each has its own enclosed supplemental pamphlet.

Stuart M. Kaminsky Video Analysis (17:46, HD): the writer gives some background about each of the two films’ production histories, offers the history of the film noir theory, and then compares and contrasts the two presentations.

The Killers (20:38, HD): Andrei Tarkovsky’s 1956 adaptation of the short story made when he was a film student. This Russian film short uses white English subtitles.

Robert Siodmak Trailers (10:18, HD): trailers for five films directed by Robert Siodmak. They may viewed separately or in montage. They are for the films Son of Dracula, Cobra Woman, The Killers, Cry of the City, and Criss Cross.

Clu Gulager Interview (18:46, HD): filmed in 2002, the actor reminisces (with a fair amount of profanity) about the making of the film and expresses his pride in what they accomplished.

Don Siegel Autobiography (19:32): excerpts from Don Siegel’s autobiography that deal with the two productions are read by actor Hampton Fancher.

Enclosed Pamphlets: each contains the cast and crew lists, information about the transfers, and an essay on each film. The 1946 pamphlet essay is by novelist Jonathan Lethem while the 1964 piece is by critic Geoffrey O’Brien.

One of the quintessential films noir comes to Blu-ray with Criterion’s double feature release of Ernest Hemingway’s The Killers. Both versions have received sterling video and audio treatment making this a wonderful bargain loaded with interesting bonus material ported over from the original 2002 DVD release. Highly recommended!

Thanks Matt! I bought this at B&N yesterday and hope to watch soon.

Strictly my personal opinion...the 1964 film is an underrated gem. It's not a masterpiece, but it is chock full of great and easily recognizable talent and has an engaging story. Plus Angie in her prime


How can you go wrong?


How can you go wrong?

Universal could have made minor adjustments to clean these features up. Some dot crawl and annoying scratches in the 1946 version; the second to last reel is riddled with distractions and a residual softness. All of this could have AND SHOULD HAVE been corrected digitally. Also, minute hints of edge enhancement in several scenes make for glaring distractions. Not all that impressed, despite the fact it looks considerably better than the tired old DVDs.

I saw an interesting documentary on the BBC yesterday, "Reagan's Last Movie", which is about the Siegel/Reagan version of "The Killers". I think the historian who made the doc is stretching, somewhat, to reach his conclusions, but - again - I did the doc was genuinely interesting. At least I thought about it afterwards, as opposed to so much of TV that is forgotten within seconds of consumption. Pasted below is the BBC description of the doc:

He's Trump's idol - the new President took his 2016 slogan 'Make America Great Again' straight from Ronald Reagan's barnstorming 1980 campaign. But like Trump, Reagan had a long past in entertainment - and one that might have scuppered his political career before it really took off. For BBC World News, historian Adam Smith tells the extraordinary story of Reagan's last movie. In The Killers (1964), Reagan played a criminal for the first time, and portrayed California businessmen as corrupt and violent - just months before real California businessmen launched him into national politics. But why did he do it? And what might have happened if The Killers had been shown on TV as planned?