David Lynch’s curious feature directorial debut is the quintessential cult classic. Misunderstood and even harshly dismissed by noted critics upon its release, it found favor with fans playing as a midnight feature, and a rise in critical appreciation through strong word of mouth and deeper understanding. Eraserhead is a strange creation, a horror film of sorts bound only by the most foundational tenets of traditional narrative, it is a technically masterful experience of surrealist might, both fascinating and inexplicable in the standard sense, wanting of dissection and interpretation. It is, therefore, a must-have piece of cinema for any serious fan of the celluloid art. 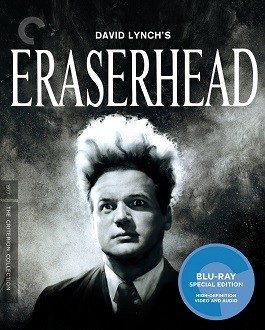 “I thought I heard a stranger. We've got chicken tonight. Strangest damn things. They're man made. Little damn things. Smaller than my fist. But they're new. Hi, I'm Bill.”

Henry Spencer, an unsettled and simple man, struggles with the dourness of industrial life. Shuffling through his life, surrounded by the creeping shadows of his back alley world, he partakes in a peculiarly awkward dinner with his girlfriend and her parents, after which he is told by his girlfriend’s mother that her daughter had given birth…to something. Henry then moves in with his girlfriend, settling to care for the life that they had created. Their offspring cries and whines, consuming the attention of Henry and straining his ability to understand where he has found himself in life.Eraserhead is a film that is not to be assessed on how effectively Lynch conveys his narrative; the purpose or reason for his film, but rather on the technique’s used in how he shows what he shows. Criticism or praise can be thrust or lavished upon the ideas or intent behind the story he’s telling, but I suspect that would rather defeat the intent of the director given his retorts when asked what Eraserheard ‘means,’ (though he does regard it as his “most spiritual.”) Evaluation of Eraserhead, then, lies in the essence of how you feel watching the film, and in the vision of a unique American director in bringing his ideas, whatever they ultimately mean, to life. So, in that regard, Eraserhead is a marvel of mercurial magnificence. An array of bizarreness and unusual moment unfolding, captured with a stunning crispness of technique, blending the bleeding darkness afforded best by shooting in black and white, with a confidence of the quirky that finds 11 minutes of strangeness laid out before the first word of dialogue is uttered.Lynch clearly delights in establishing an unsettling paradigm into which he drops a disconcerting ambiance and a question around every corner. It is easy to see the groundwork being laid for Lynch’s grasp of approaches that would tickle and delight him in future tales like The Elephant Man, Blue Velvet, and Twin Peaks. There’s a meandering quality to Eraserhead that should not be mistaken for listlessness. Rather, the uncomfortable silences, awkward conversations, and bursts of bizarre behavior are all purposeful and matter, even if you’re not sure how or why by the time the final bright moments of the film recede to the credits.The small cast embrace not only the material, but the production, remaining dedicated to the shoot over the five years it took to coral the funds needed to supplement the financing provided by the American Film Institute and finish the film. Jack Nance’s Henry Spencer is an unusual creation. A shifting soul confused and fascinated by the world around him, he was once described by Lynch as a simple man prone to staring into the small things of the world trying to understand them and trying to figure out how he found himself there, at that moment, staring at those things. It’s a revealing description and Nance pulls it off unquestioningly. Judith Anna Roberts appears as the seductive lady across the hall, enticing Henry, and Charlotte Stewart addles between submissive and overbearing as Henry’s girlfriend, Mary X, and is quite good. Mr. and Mrs. X, played by Allen Joseph and Jeanne Bates respectively, are terrific in their brief turns, with Allen Joseph’s odd demeanor and dialogue being among the most memorable of the scenes.To offer too much by way of theories for what Lynch was sharing with Eraserhead risks robbing the uninitiated the chance to walk freshly into the curiosity of the tale, but suffice to say there is genuine pleasure in trying to decode and reason a hypothesis for what Eraserhead ultimately is about. What we bring to the viewing will inform that interpretation – something I imagine delights Lynch to consider. But the kind of surrealist expression found in Eraserhead, informed as much by the influence of Franz Kafka as Lynch’s eye for detail and his early fear of fatherhood, welcomes the audience into the bizarre visual musings of its creator, and what it all represents is clearly a Lynch’s personal view of the themes he’s exploring here.

Lynch’s Eraserhead is presented in its original 1.85:1 aspect ratio and it’s stunning. A dark film that exists in the deep, black shadows on the film canvas, Eraserhead is astonishingly crisp. What we have here is a new transfer created in 4K resolution by director Lynch using a Lasergraphics Director Film scanner from the original camera negative. Par for the course with Criterion supported transfers, thousands of instances of dust, debris, specks, jitter, scratches and such have been carefully removed while grain, etc. were protected.The greatest demonstration of detail and clarity come in the key moment in the film, the eraser shavings dancing in the bright light behind Henry’s gripping stare – it’s magnificent. Eraserhead is a film with black the closes in on the characters, creeping ever more pervasively around them – in the apartment, in the hallway, in the street.

Director David Lynch and sound editor Alan R. Splet used the original monaural mix stems in 1994 to create the stereo soundtrack. With some additional digital restoration performed this year, one of the critical elements to the experience of Eraserhead, the sound, has never been better. The distinctiveness of the ambience is crisp. The pervasive low hum, the occasional grinding of gears, and creepy wailing of the ‘baby,’ mix to produce a unique ambient experience delivered finely here.

The myriad supplements, divided by years (except for the short films) allows a progression of deeper insight into the film from the perspective of various crew and cast. Early interview footage, on video tape, is of generally low quality (and the interviewer clearly a novice,) but Lynch’s view on the production and his early insight into creating (and protecting) the mood, and hiring of Jack Nance, is good to see.The most recent of the interviews, featuring a few cast members and the film’s cinematographer, provides a delicious insight into Lynch’s creative mind and approach; his casting method, and his dedication is revealing.The short films have not been cleaned up/restored, but are excellent chapters in Lynch’s filmography – short, specific art pieces of varying quality – and offer more pieces of the mosaic that is his brain.“Eraserhead” Stories, a 2001 documentary by David Lynch on the making of the film New high-definition restorations of six short films by Lynch, with introductions by the director: -Six Figures Getting Sick (1966), -The Alphabet (1968), -The Grandmother (1970), -The Amputee, Part 1 and Part 2 (1974), and -Premonitions Following an Evil Deed (1996)New and archival interviews with cast and crewTrailerThick booklet including interview excerpts from the book Lynch on Lynch

It’s darn near impossible not to fall in love with the possibilities of Eraserhead; impossible not to be captured by the demure yet striking figure of Jack Nance and his matchlessly alert hairstyle. David Lynch’s incomparable Eraserhead remains captivating. A few years shy of its 40th anniversary, Criterion offers up this important film in staggering quality, with wildly impressive audio and video quality, and with a sublime collection of short films by the director.Highly Recommended.