An animated adventure with a wonderful conception and frustratingly mundane development, Epic is a paint-by-the-numbers CGI escapade. Portraying a miniature world centered on nature and its regenerative magic and inhabited by tiny creatures who use nature’s ordinary miracles in their own unique ways, the film had so many directions in which it could have gone. That it ended up being a good versus evil story (growth versus decay) told through a samurai-style combat narrative might get young boys’ hearts pumping, but it’s a disappointment for anyone else looking for something fresh. 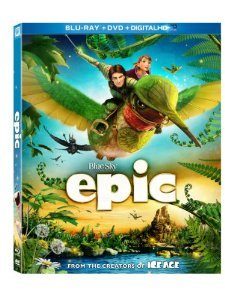 Discouraged by not being able to communicate with her eggheaded father (Jason Sudeikis) whose constant pursuit of proof that his concept of a miniature world existing has put up a wall between them, young M.K. (Amanda Seyfried) finds herself embroiled magically in the war between the Leaf Men who are protecting their queen (Beyoncé Knowles) who represents life in the forest and the Boggans who represent the rot and decay that they hope will wipe out all of the greenery on the planet. Led by Ronin (Colin Farrell), the Leaf Men despite being outnumbered always manage to protect their queen and allow the forest to thrive, but the evil Mandrake (Christoph Waltz), the leader of the Boggans, has been gathering forces for a very specific attack which, if successful, will once and for all rid the world of the queen and her anointed heir and thus destroy the regenerative power that she produces.Based on the children’s book The Leaf Men and the Brave Good Bugs by William Joyce, the screenplay by James V. Hart, William Joyce, Dan Shere, Tom J. Astle, and Matt Ember begins rather haphazardly by showing both the real and miniaturized worlds almost in counterpoint before any of the identities of these people have been established. Ronin and his immature, arrogant apprentice (is there any other kind?) Nod (Josh Hutcherson) zip around while the bumbling, single-minded scientist Bomba (Jason Sudeikis) ignores his daughter’s pleas to talk, and M.K.’s transformation into one of the two-inch leaf people isn’t especially well explained or handled. Once we’re in the thick of battle between the opposing forces, the animators have a field day with several elaborate set pieces: an attack sequence early on with the queen in constant peril, a bird race later on (which gets shortchanged), the frantic escape from the Boggans’ domain (the Leaf Men use hummingbirds as their mode of transportation; the Boggans use bats), and the climactic confrontation between good and evil. It’s all pretty standard narrative stuff with utterly no surprises but only the intricate animation (which is superb) to hold one’s attention. Also around to give the movie a lift are the comic relief characters of Mub (Aziz Ansari) and Grub (Chris O’Dowd), a slug and a snail with extended eyeballs who serve the same basic need in this film that Sid does in the Ice Age movies animated by the same studio: they keep things from getting too scary or too overtly dramatic with their comic interjections at just the right moments.Though one wonders why the head of the Leaf Men has an Irish brogue when none of the other characters possess any British characteristics, Colin Farrell undoubtedly brings a stateliness and nobility to the stoic head combatant Ronin. Amanda Seyfried and Josh Hutcherson portray the impulsiveness and stubborn determination to go their own way that makes their youthful characterizations ring true. Aziz Ansari and Chris O’Dowd do earn their laughs legitimately as the comic relief duo, and Steven Tyler has a surprisingly effortless time as the absent-minded caterpillar Nim Galuu who's the record keeper of Moonhaven (the home of the Leaf people). Double Oscar-winner Christoph Waltz does fine as the evil Mandrake though he hasn’t quite been given enough juicy dialogue to allow his character to ooze with evil in the tradition of the best villains. Less effective is Beyoncé Knowles as Queen Tara whose line readings are a little stiff and self-conscious.

The transfer’s 2.40:1 theatrical aspect ratio is presented in 1080p resolution using the AVC codec. Sharpness is outstanding, and color is spot on throughout with greens (of course) really being handled especially well. But there is something about the image quality that keeps it from leaping off the screen like the best high definition transfers do of CGI animated films. Whether it’s a little lightness of contrast or something else, it just seems to miss being reference quality. The film has been divided into 28 chapters.

The DTS-HD Master Audio 7.1 sound mix begins in a rather subdued fashion, but the all-out assault on the available channels is soon to come and is quite impressive. Split sound effects echo through the entire soundstage with effective pans across and through that keep the mix constantly interesting. Dialogue has been superbly recorded and resides mostly in the center channel with some infrequent but very effective directionalized dialogue on occasion. Danny Elfman’s music (and the song “The Rings of Knowledge’) have outstanding spread through the fronts and rears making for a glorious listening experience.

Birds, Bugs, and Slugs: Forest Explorer (5:21, HD): a quick primer on the members of the animal kingdom and their animated counterparts in the movie.Rot Rocks (3:18, HD): a tidy explanation on the necessity for rot and decay in the forms of bacteria, fungi, and moss in the world of growing things.Bugs of Camouflage (3:44, HD): Ken the Bug Guy describes and displays a series of camouflage insects.The Epic Life at 2 Inches (3:42, HD): a brief featurette goes into the details of the physics of being tiny and how that might work to great advantage.Mysteries of Moonhaven Revealed (24:39, HD): the seven behind-the-scenes featurettes which feature director Chris Wedge and several of the film’s producers, animation directors, and voice actors describing their parts in the production.Coloring Book App: instruction for downloading provided on an insertTheatrical Trailer (2:12, HD)Promo Trailers (HD): Percy Jackson: Sea of Monsters, The Croods, among others.DVD/Digital Copy: enclosed instructions on using the provided code for the digital copy and/or Ultraviolet.

An entertaining enough animated adventure feature that children will undoubtedly enjoy, Epic disappointingly offers less amusement for the adults in the family. Still, with outstanding animation and quality video and audio encodes, families will be safe with this one.

My wife and I just saw this over the weekend at the local $2 theater. I think she enjoyed it much more than I, but that may be because it reminded me an awful lot of the far superior (and overlooked) Ferngully.
You must log in or register to reply here.